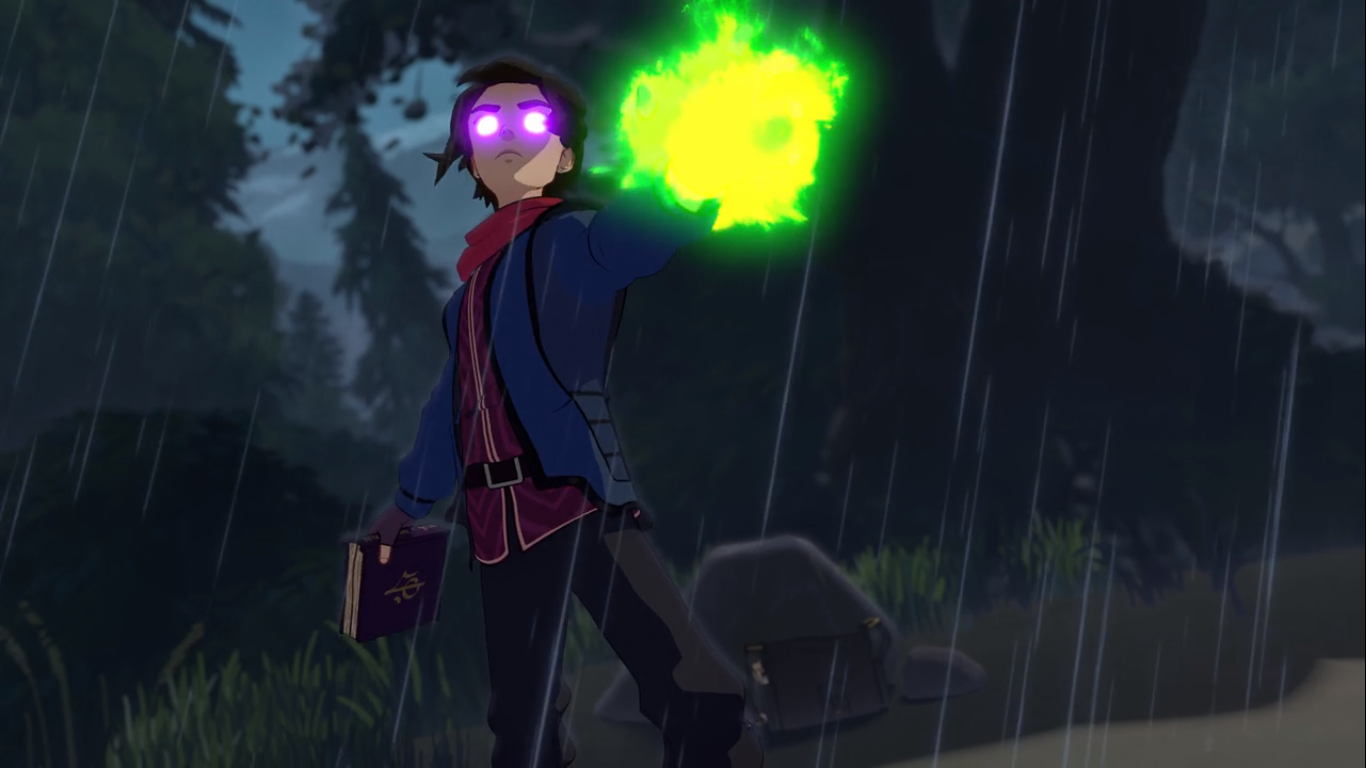 The Dragon Prince Season 2 expands the world we discovered in Season 1. It introduces the monarchs of the other four human kingdoms as well as giving us flashbacks that flesh out some very important characters, not to mention expounding a little on the rules of magic.

Spoiler Warning: This article contains spoilers for the entirety of The Dragon Prince Season 2. Read at your own risk.

The Dragon Prince Season 2 picks up where Season 1 left off, recapping the important points of Season 1 in the form of Callum writing a letter to his father (who he has yet to learn is dead). Callum, Ezran, and Rayla are resting at the Moon Nexus. Rayla insists on them continuing their journey to Xadia as soon as possible, but both Callum and Ezran are distracted by other pursuits. Ezran insists that they teach Zym to fly while Callum is desperate to learn magic from Lujanne. Both of these points are ongoing subplots throughout Season 2.

Another ongoing subplot is the idea of destiny, of what one is meant to do. Callum, Rayla, and to a lesser extent Ezran all struggle with this notion. Callum believes that he is meant to learn magic, even though as a human he lacks 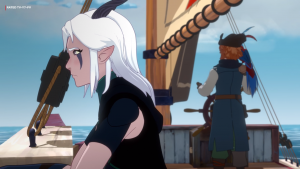 the natural connection necessary. Meanwhile Rayla is conflicted about her waning desire to be an assassin. She gets some life wisdom from their blind pirate friend, Villads, about how the only thing a person can control in life is themselves.

Callum’s journey is a little more dramatic: trapped in a fever dream after using dark magic to save the dragon, he fights the desire to accept dark magic as his purpose. In a very Star Wars kind of dream (oh, like you weren’t thinking of The Empire Strikes Back when the hooded figure in his vision ended up being himself), he gets advice from both his stepfather and his mother, and when he wakes up, he is able to wield sky magic. Ezran, after learning that his father is dead, decides that the best course of action is for him to return to the kingdom and be king. But what kind of kingdom will he find when he returns?

Soren and Claudia have been chasing Callum and Ezran. Both have separate, secret missions from their father. They catch up with the group at the end of the first episode, “A Secret and a Spark”, when they lull Rayla to sleep in 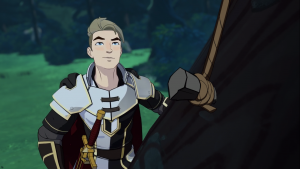 order to attack her. I’m still not sure how I feel about Soren and Claudia; their actions throughout the season bounce back and forth, and it seems that their main motivation is earning their dad’s approval. For example, Soren doesn’t approve of killing a sleeping Rayla – it doesn’t feel “sporting” – but he doesn’t seem to have any issues with killing someone who has just woken up. Plus, his misgivings over killing a child disappear fairly quickly as he arranges an accident for Ezran. Soren’s morals are all over the place. After he is paralyzed following a fight with a dragon, he admits to Claudia that he was instructed to kill the princes, and that he’s happy he’s been paralyzed because now he can’t go through with it. He’s glad he has a reason not to kill them – but it sounds like the only thing stopping him was that he no longer physically could, not that he doesn’t want to. 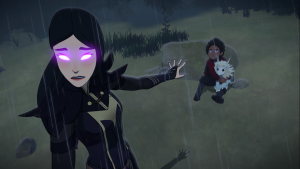 Likewise, Claudia is hard to get a read on in The Dragon Prince Season 2. She and Callum share a moment in “Half Moon Lies”, but Claudia is overwhelmed with the guilt of keeping her secret and tells Callum that his father is dead. She continually argues with Soren over the best course of action for bringing the princes back, but eventually she agrees with her brother and uses dark magic to trap the princes. She is appalled at Soren’s secret mission, and I was hoping that knowledge would be the catalyst that would prompt her to question her father and his teachings. Though she does let both Zym and Ezran go in order to go to Soren, she succumbs to deeper dark magic in order to heal Soren’s paralysis. The result of this magic turns a streak of her hair white.

Now the question is, what will Claudia and Soren do now that their secrets are out and they have both failed their missions? Can they be trusted? Will they continue to struggle with the morality of what they’ve been asked to do? Can they get free of their issues with their father enough to make their own choices about what is right?

Viren’s motivations, meanwhile, remain murky. In The Dragon Prince Season 2, he finally uncovers the secret of the mirror – it’s a two-way mirror, and the person in the other room is a mysterious elf whose name, we later discover, is Aaravos. However, he doesn’t trust the figure inside. He hopes to rally the other four kingdoms to his cause, but the rest of the council disagrees. They believe their first and most important order of business is to locate the missing princes. Viren resorts to subterfuge and threats. He steals the king’s seal and sends messages to the other monarchs, proclaiming himself regent of 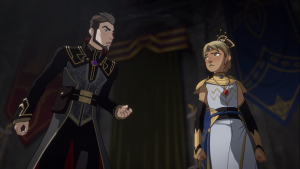 Katolis and asking them for help in their war against Xadia. Three of the monarchs agree to help if the decision is unanimous, leaving the actual decision-making in the hands of young Queen Aanya of Duren. In order to sway Aanya to his side, Viren tells her the story of hunting the heart of a Titan in order to save both Duren and Katolis from famine. Aanya’s mothers sacrificed themselves to save their people. Aanya is moved by Viren’s story but ultimately decides that her mothers did not lay down their lives for their people to go to war. Because Aanya is against it, the other monarchs withdraw their support. Viren returns to Katolis to a livid council, who order his arrest. Out of options, he turns to Aaravos. 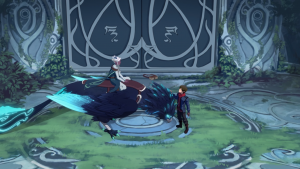 There was a lot going on in The Dragon Prince Season 2, so let’s try and unpack everything. First, I’m glad that my worries about Callum using dark magic were mostly unfounded. You can see from both Claudia and Viren that there are consequences to the practice, and I’m glad that Callum has turned from it to seek a more natural connection. Now, how is this going to affect Xadia and the human kingdoms? From what Lujanne was telling Callum, the Xadians seem to take it as absolute fact that humans cannot do magic other than dark magic. Now Callum can. Does this have something to do with his father, about whom we know nothing?

I think it’s fairly obvious that Viren is being set up as the main villain in the story. If that wasn’t clear after Season 1, his actions during Season 2 should hammer that point home. The question is, how deep does it go? How long has he been planning this? Is this simply a reaction to events that have happened, or is there something more sinister 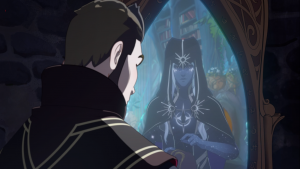 behind it? I’m anxious to hear Amaya’s version of what happened when they went to hunt the Titan, as I don’t trust Viren’s story. He was using the story as an attempt to manipulate Aanya, so it’s more than possible he wasn’t telling the whole truth. How much of it was true? Was dark magic the only solution? What caused the problem in the first place? Also, the fact that he was the last person to see Sarai alive has me very suspicious.

On the other hand…perhaps it’s Aavaros who is meant to be the big bad. Although, Viren’s actions up until that point are still his own. It wasn’t Aavaros’s influence that had him tell Soren to kill the princes or Claudia to abandon her brother if need be. 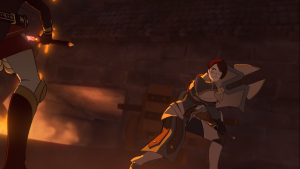 I am a little disappointed that we didn’t get to see more of the sunfire elves in The Dragon Prince Season 2. Our only interactions with them were through Amaya fighting them at the Xadian border, and though I loved getting to see Amaya in her element, I’m scratching my head as to the purpose. Was it simply to show how the sunfire elves aren’t attacking, merely defending the border? They don’t have names, they don’t even talk (maybe they can’t talk?). Moments like this – along with the dragon not attacking the village until Soren attacked it first – show the Katolians as the aggressors, which would seem to indicate that ending the war is as simple as just, you know, not attacking them anymore.

I’m also disappointed that so far the only canonically queer characters lasted two episodes and then sacrificed themselves, but you know, whatever. Par for the course at this point, which is just sad. Thanks for the wink and nudge, maybe next time give us some actual representation.

Overall, The Dragon Prince Season 2 did a nice job of progressing the story and fleshing out both the characters and the world. The pacing was pretty good, although it’s unclear how much time has passed. (Season 1 was apparently only a week, and Season 2 was probably about that long.) I found the animation to be better this season as well. There are still a lot of unanswered questions, but at this point it I think the story is moving along quite nicely and seems to be coherently plotted out.

What did you all think of The Dragon Prince Season 2? What are you theories about what we’ve seen, or what we don’t know yet? Do you think Sarai might actually be alive? Do you think King Harrow is actually in the body of his bird? During Callum’s dream, did your mind first go to The Empire Strikes Back or that Kermit meme? Let us know in the comments!