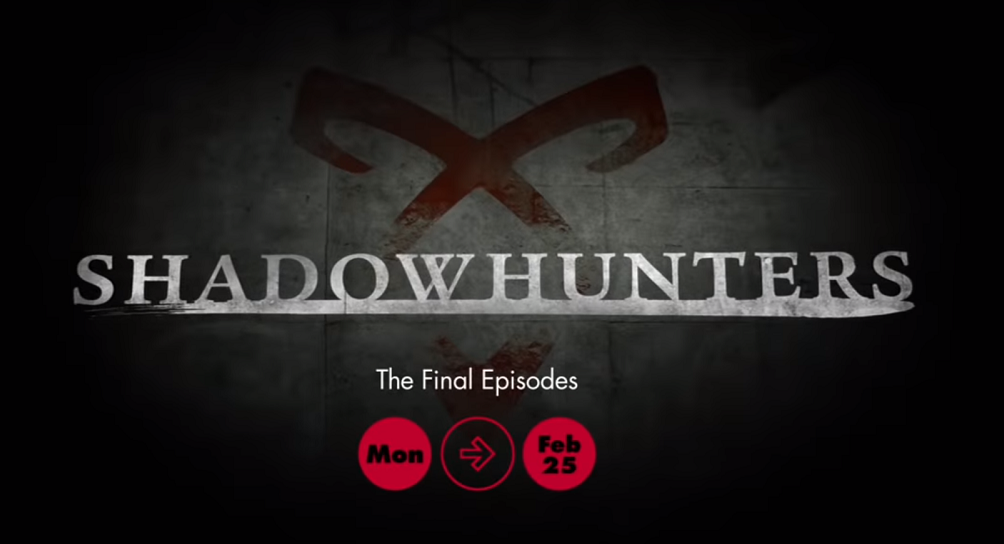 During the site’s down time last week, quite a few trailers dropped for properties that we at The Geekiary (or perhaps just me) are fans of. We’ve gotten trailers for Shadowhunters season 3B and The Dragon Prince season 2, among others. Let’s take a closer look at some of them.

First up, the trailer for Shadowhunters season 3B:

Shadowhunters was sadly canceled last summer, and despite heavy fan action, no other networks or streaming services have stepped forward to continue it. Therefore, Shadowhunters season 3B contains the final episodes for the series.

One thing the trailer does is calm any fears anyone may have had after the cliffhanger that season 3A ended on. Alec is fine, despite having been shot in the chest with an arrow, and Clary is back, even though she vanished at the end of 3×10. Obviously something is wrong with Clary, as depicted in the trailer, due to her new connection with her brother Jonathan, back from the dead with a new face.

Other things to note in the trailer: Alec sparring with Magnus (teaching him to fight, now that he no longer has his magic, perhaps?), someone getting married (I’d be willing to be good money that it’s a Malec wedding), and Simon and Izzy getting closer. Honestly, I know that Sizzy is a very popular ship, since it was canon in the books, but they’ll have to do some serious development for me to believe that this incarnation of these characters have feelings for each other.

Shadowhunters season 3B premieres on Freeform on February 25, and while I previously have not reviewed the show, for the final episodes I am going to grace you all with my thoughts, so stay tuned.

Next up, The Dragon Prince season 2:

I wasn’t originally sold on this show when I first heard about it, but like most things I end up loving, I started watching because of Tumblr. The animation is a little rougher than what I’m used to, but The Dragon Prince is actually a fairly solid show (they even have a deaf character who speaks ASL), and I’m very excited about season 2.

One thing that a lot of my friends are nervous about is that Callum seems to be using dark magic, and it’s terrifying to think of a) what circumstances must have driven him to that choice and b) what consequences he may face because of it. Now, trailers can be very deceptive, so perhaps what we’re seeing isn’t real, but it’s still going to be in the back of my mind until I can see for myself.

I’m very excited to see more elves coming into the story. I’m intrigued by the world of The Dragon Prince and it’s nice to see that it’s expanding in season 2. We’ve seen the moonshadow elves with Runaan and Rayla, and now we’ll get to see the sunfire elves. (Speaking of Runaan, I couldn’t help but notice that he wasn’t in the trailer at all. I hope he doesn’t spend the entire season trapped in that coin! And while we’re on the subject of trapped people, what is going on with Gren?) And my poor baby Soren is facing off against a dragon!

The Dragon Prince season 2 premieres on Netflix on February 15.

The trailer for the second part of season 3 of Attack on Titan also dropped this weekend:

Stuff is happening! Look at all the stuff happening! Eren, Armin, and Mikasa have returned home, and we’re back in Shiganshina. (Does this mean we’ll finally get to see what’s in Eren’s basement?) Levi is being extra as usual, and all of our friendly neighborhood Titan shifters seem to be here (except Annie).

I’m unfortunately still behind on Attack on Titan, but since season 3 part 2 starts this April, I have a little bit of time to catch up. It will be available to stream on Crunchyroll.

Also releasing last week was the official trailer for The Umbrella Academy:

Based on the comic book series by Gerard Way and Gabriel Bá, The Umbrella Academy is about a dysfunctional family of unconventional superheroes, who were all adopted by an eccentric billionaire after being suddenly born, trying to stop the apocalypse. I don’t know much about the property but I am a fan of Tom Hopper and Ellen Page, so I’m very much looking forward to this.

The Umbrella Academy premieres on Netflix on February 15. (That’s going to be a busy weekend for me!)

What do you all think? Are you excited for these shows to come back (or premiere in general)? What are you looking forward to? Let us know!

Previous:Damon Wayans Jr. Actually Apologizes for Transphobic and Homophobic Tweets from His Past
Next: Sailor Moon SuperS: The Movie Coming to DVD & Blu-ray