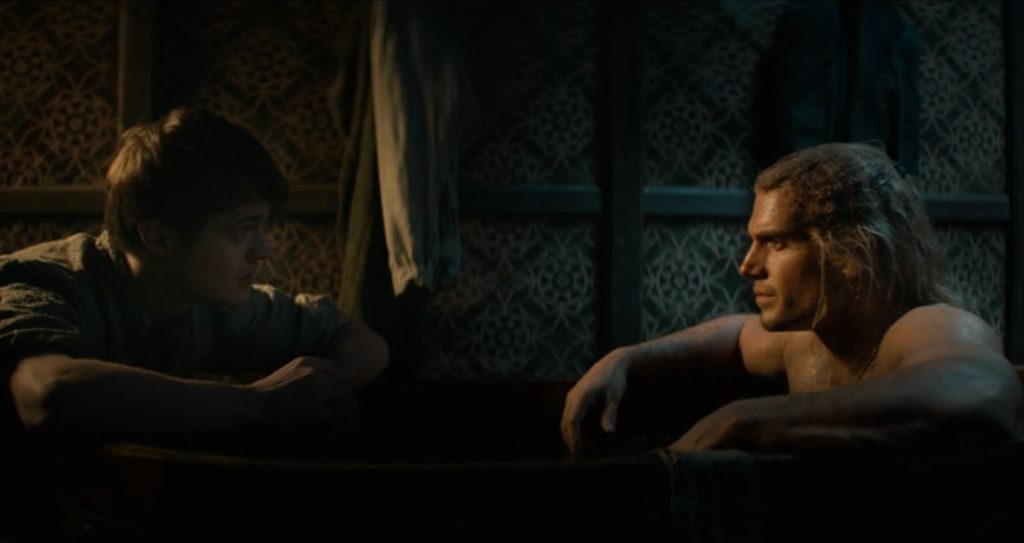 Jaskier giving Geralt a bath and being sassy (Image: Screengrab)

The Witcher season 1 on Netflix seems to be gaining popularity. And you know what? Good for everyone involved. The show has already spawned a passionate fanbase for Geralt and Jaskier. I would have been happy about it, too, but I have my concerns.

Shipping happens. It has been happening for a very long time and it isn’t going anywhere. When it comes to shipping, the team behind a particular piece of media (that the shipping is linked to) can fully embrace it, kind of ignore it, or start an all-out war with the fandom.

Correct me if I’m wrong, but it looks like the Geralt/Jaskier ship is gaining a lot of traction, especially in the part of the fandom that is only familiar with The Witcher series on Netflix. You can easily find fanart, fan edits, fanfics, and more involving Geralt and Jaskier online.

Again, I would have been glad to see so much passion coming from numerous fans, but I can’t make myself be happy about it.

To me, it feels as if the current situation can get out of hand. And that is never a pretty sight. Just ask the Voltron, Teen Wolf, and Supernatural fandoms.

One of the issues I have deals with the obvious manner in which Jaskier has been queer coded. And no, I don’t think it was unintentional in this case.

The writers knew what they were doing when they wrote the scenes between Jaskier and Geralt. Otherwise, they wouldn’t have had Yennefer (Geralt’s love interest) wonder if he and Jaskier were just friends.

There’s even a scene where Jaskier is clearly annoyed by Yennefer because of their past encounter and how Geralt is very chummy toward her.

Don’t mind me! Just a clip of a “Straight” dude breaking up with his “Straight” friend (in such an over-the-top emotional manner) and not feeling sad at all. No Homo! Cos they both love women. The Witcher on Netflix is a mess! Lol. pic.twitter.com/pGQ3Zt6MYW

Excuse me! But in what world does a “Straight” guy allow another “Straight” guy to bathe and talk to him like that? Oooohhhh!! But it’s “No Homo” cos they’re talking about loving women. The Witcher on Netflix knows it’s queer. It just won’t say it. Lol. pic.twitter.com/eUk7CIp09V

The way Jaskier has been handled during the eight-episode first season is what, in my opinion, comes across as disrespectful to the queer community.

Media is full of unfortunate examples of effeminate men being used for comedic purposes.

However, the way Jaskier has been written can be easily read as a fictional character that is effeminate to only serve a comedic purpose. There’s just nothing else to his arc in the first season.

Heck! He doesn’t even have an arc except for acting like a “girl” (for a lack of a better word) around the “manly” Geralt.

The entire thing is even more annoying due to the writers refusing to acknowledge Jaskier being queer.

Again, I’m not saying having an effeminate Jaskier be queer would have helped matters with him being nothing more than a comedic tool, but at least, it would have been something.

Right now, Jaskier serves another example of “gay panic,” dealing with how queer comedy can be used for laughs, but everything needs to be instantly made “No Homo” to not offend certain viewers.

Just think of how much better Jaskier’s character would have come across if he exhibited the same mannerisms while being queer because he just didn’t care.

It would have helped (even if just a bit) to do away with how (in the first season) he is supposed to be a queer coded “straight” character written for comedic effect.

Take Eric from Netflix’s Sex Education as an example. He owns who is and is a better character for it. There aren’t any “No Homo” moments when he interacting with his straight friend Otis. They get each other and Eric is simply who he is.

Making Jaskier queer doesn’t mean Geralt has to be queer, too. Queer men can be platonic friends with straight men. I know! Shocking!

However, making Jaskier queer would have helped add some queer representation (though somewhat problematic) in a show that, frankly, had the potential to be a lot better. At least, it didn’t have to have numerous instances of “No Homo” humor in it.

It will be interesting to see what The Witcher writers think of the fandom’s passion behind Geralt and Jaskier.

With the second season already greenlit, I just hope this show doesn’t intentionally pander to shippers to get more eyeballs to view this series.

The Witcher hyping up the Geralt/Jaskier ship, without actually delivering, to promote the upcoming season won’t do anyone any good. 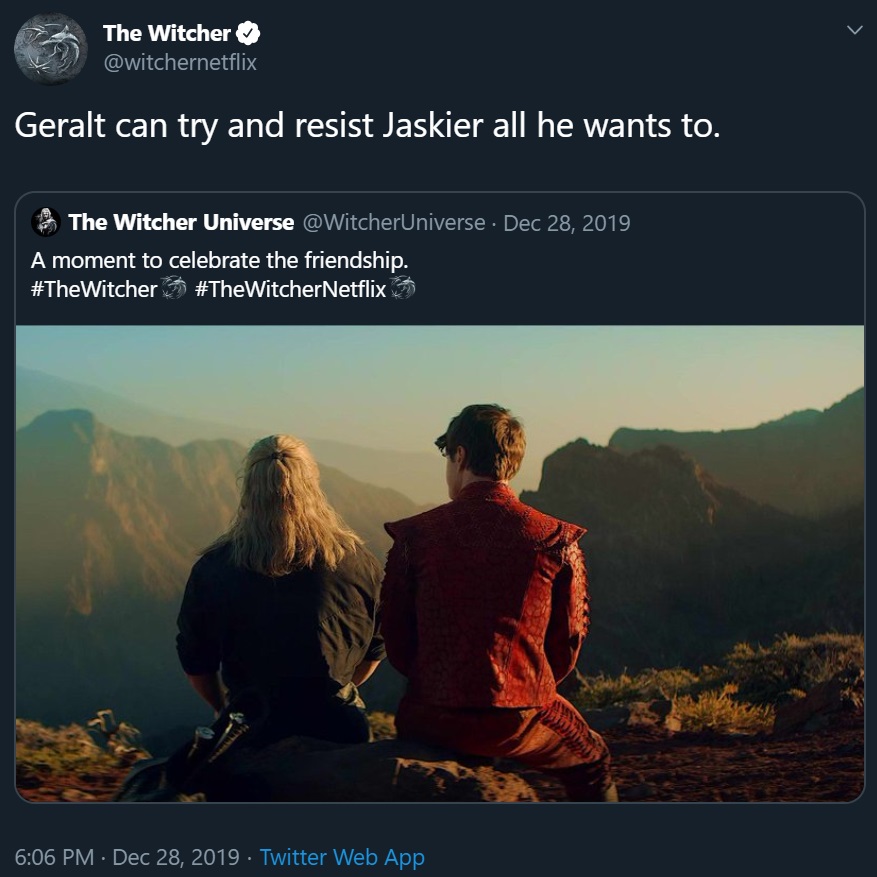 As someone who is familiar with Jaskier from The Witcher game series, I was surprised to see how he came across on the streaming platform.

In my opinion, the game version of Jaskier is someone who does read as straight even if some of his mannerisms likely fall on the effeminate spectrum.

But there’s no denying how queer coded the show’s version is.

That’s why I do think it wasn’t unintentional. Did the writers deliberately portray Jaskier this way to queerbait certain viewers?

If they did, then shame on them.

Due to us being in 2020, fingers crossed, writers decide to leave intentionally queer coded characters in the past. I also hope they leave fictional “No Homo” effeminate “straight” comedic men behind, too.

Effeminate men (straight and queer) already have a lot to deal with around the world. Continuing to use fictional versions of such people as comedic tools that have no personal arcs isn’t helping push the needle toward a better place.

As for the Geralt/Jaskier shippers, yay to you finding something that inspires you to create, but try not to feel disappointed about it not happening (especially after the numerous examples we have of certain fandoms being taken advantage of for views).