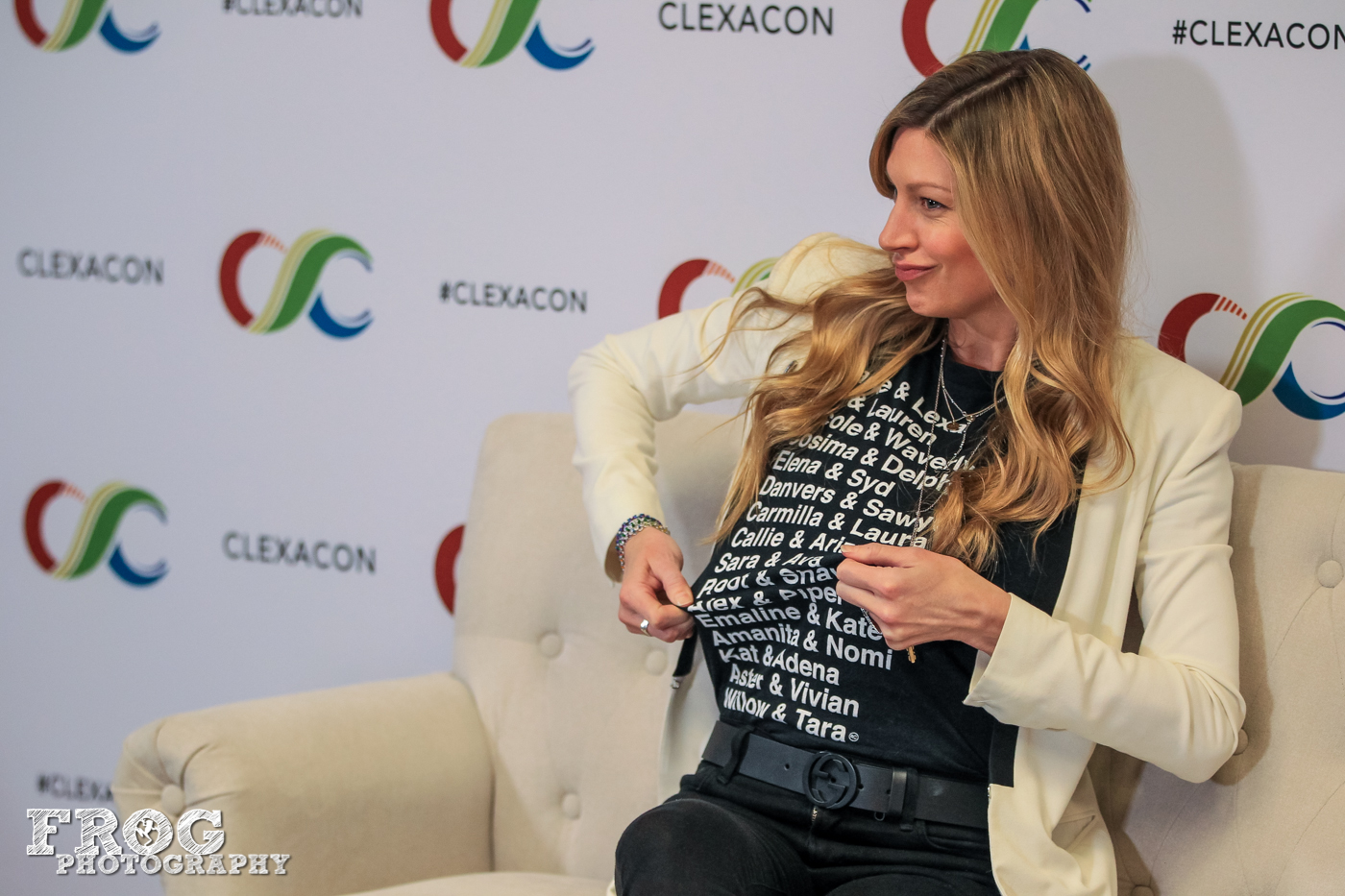 DC’s Legends of Tomorrow is the ugly duckling of the DCTV universe but has gathered a strong fan base for both its inclusive and insane storylines. One half of the ship Avalance, Jes Macallan, talked to us at ClexaCon 2019 about her character Ava, LGBTQ representation, and her experience with the fandom. 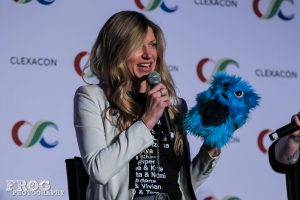 How many of those couples do you actually recognize from the shirt you are currently wearing?
Macallan: I actually started looking them up when I got the shirt at the last con. I know obviously the first one [Clarke & Lexa], that is why we’re here. I know most of the names of the characters, but I need to do research. I recognize them all, but I couldn’t tell you from which shows that are. This [list] in itself, and how many characters there are right now… This girl I was talking to yesterday, her name is Beth. She’s writing or pitching a show or a web series. She grew up in the ’80s and she was saying this would have never happened in the ’80s. There were no characters like this on TV. So there’s a little bit of excitement to be here. She’d like to tell the youngsters: be happy for what you have. This is amazing. We kept talking about her show. She’s trying to pitch a show that is all a group of five couples. They all grew up in the ’80s and they address the fact that there was no representation with them growing up and what that feels like. And then hilarity ensues. I can’t remember what it’s called, but it’s amazing. Amazing.

Back on Mistresses, I know that you were really active on Twitter. I was wondering what kind of differences you’ve noticed with interacting with a smaller fandom?
Macallan: I was a little mad how they handled that [her character’s lesbian relationship in Season 1]. I’m very vulnerable right now, so I’m going to say it like it was. I was mad and I was very nervous that this was going to happen to me again. After the camread [Camera Audition], I remember being very nervous that it was going to be, I don’t even want to say gratuitous, but they just didn’t follow through with it [on Mistresses]. In the end, they made it wishy washy and it was like, “Oh, we’re going to do it because it’s what we should do.” It just wasn’t taken seriously. You can’t take something like that and just not be clear. This is why when I camread with Ava on Legends of Tomorrow and when I spoke to the producers, I knew where they wanted to go [with Ava & Sara’s relationship]. I knew [Sara’s] history after looking up the show because I hadn’t watched it, that she was very promiscuous and I was like, “Wait, are we going to go here or are we just going to do another coupling and at the end of the season she just disappears?” Because I don’t want to do that again. I don’t want to touch it. 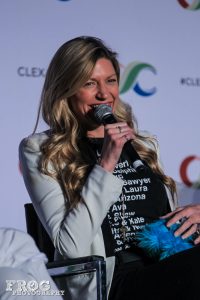 I want to be in for the long haul and build something. They reassured me. But you can never be sure. The actors, we’re not the big wigs and you can’t believe the networks and the studios. Those are the people that the letters need to be written to and those are the people that need to be constantly beating down the doors of because it’s with them. They promised me, and thank goodness, they followed through it. Caity and I have such great chemistry and we’re going to hopefully do this for seasons to come. I think it’s a fine line. [Mistresses] was in 2015. Look how far from 2015 to 2019 representation has come on television and everywhere.

Legends of Tomorrow is now being shown in a lot of countries and I was wondering if you noticed any difference in how fans from different countries react to this show and your relationship?
Macallan: I’m really learning about cultural restraints from the fans of the show and the way that we communicate. When I’m speaking with someone from South Korea or from Brazil… You learn, you start to feel their shame of their culture or their frustration with their culture of acceptance on top of being themselves. They say they want to be themselves and they want to be themselves in Korea or somewhere where maybe they aren’t as celebratory at all to even love who they want to love. Thank God in the States we love who we want to love. We’re very lucky to have that. When you are on Twitter – and it’s always hard because you have to translate. You don’t know if you’re hitting the right translation. On Instagram, you push that little translate button and you hope that this is saying what it says, like, “I have a really hard time and no one knows and I live all in alone in a bubble.” And then you’re thinking “God, the government’s on top of it, too!” That scale, that’s just a whole other level. You just sit there and think back and read something about the [effing] Sultan of Brunei. You can’t believe that still exists. We get so American, we’re trying to push for everything to happen in America, but the other part of the world is so screwed and behind and stoning people for the most simplistic thing that we have as a right in America. That’s shocking to me. For me, it’s a very responsible thing to read those messages. 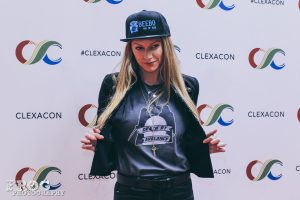 Has coming to ClexaCon specifically changed your view of fans? I know you’ve been to other conventions and I know that queer fandom can be very passionate. Is that any different here for you?
Macallan: I don’t know why but I feel like those are the only fans I remember. (laughs) When I walked out this morning, it was immediate, the fans that I remember. I think it’s because we share real stories. It’s not someone coming up to be just get an autograph, it’s, “Hey, I have a specific story or I make merch and I’m trying to raise awareness for this cause or I came out at 12 and I came out to my dad…” For me, it is different because we’re sharing. It’s not just fandom. It’s deep. It’s stories. It’s connection. It’s not like, “I put your show on and like most shows that I watch and I have popcorn and walk around and kind of in and out of it.” It’s a super connection. “Oh and when you said that, that’s how I am with my wife and when they wrote that, that’s how I am, or that’s where I met my partner. That’s how I feel. These are my pronouns.” It’s like I’m learning while we’re learning. Just to have to have that is a completely different thing than just a fan coming up saying, “I really like you. I think you’re a great actress.” It’s like having a sandwich with your contractor or something and having a sandwich with your sister or your brother. It’s going to be a different experience all around.

How does it feel to be part of one of the best shows in terms of diversity, race, race and religion?
Macallan: It’s changed my life. The hard thing is that there is an amount of responsibility. I don’t even think I knew what I was stepping into. I wasn’t expecting what it was gonna be and now I’m feeling so much responsibility. I get a lot of messages, not just LGBTQ, representation of any kind, mental illness messages… I just want to help everywhere I can, but then also make sure that I’m taking care of myself. I’ve had sabbaticals, and I say to people they need to get off social media all the time. It’s hard because it’s needed for this kind of stuff [interacting with fandom]. I talk about fans that are over on the other side of the world. But then you get people that I know that this is hurting their brain. I know that this is hurting their inside and their heart and their self image. I have a 10-year-old and a 13-year-old stepson and stepdaughter. I know Instagram is just breaking them. I love being a part of it, but I do take time for myself as well. My biggest suggestion when you’re feeling mentally out of control is to really shut down all of that stuff, at least from a handheld perspective where it’s constantly in your body, in your pocket. Make yourself go to a computer and have a morning of 30 minutes with it and then come back to it. But then what happens is: I feel terrible. I do all my own social media. I don’t have anyone that does it for me. That’s why I’ve posted nothing in the last however long because I’ve been going through a few hard things. I’m happy to be part of it, but I just want to be the best I can be at it. 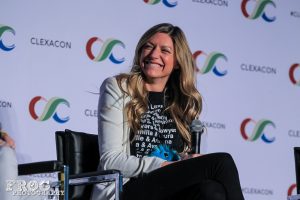 What is one thing Ava needs to learn this season in order to be successful with her relationships, not just with Sara, but everyone in her scope?
Macallan: I think it’s the control thing. It’s the wanting everything to be kind of planned and in control. I have it in my life a bit. It’s way gone. I had way more of it and I play Ava with way more of that. If you met me 10 years ago, I knew what I was doing with my life. I knew how it was going to be. I knew where I was going to be at one year, five years, 10 years. I’ve had so many different twists and turns in my life that I know that you can’t micromanage like that. So I put that into Ava. A lot of Ava at the very beginning is so stuffy. I wanted her have somewhere to go to loosen off, to have Sara bring that out of her. I saw that in a lot of couples, no matter what the couples were, that there was always a little bit of an Alpha-Beta situation. I knew that it would be more complex to be the other Alpha because Sara was such an Alpha. What I want her to keep learning is to just be more Beta, take a back seat and be okay with that.