Recommendation: “The Other Two” Is Definitely One the Best Comedies I’ve Watched 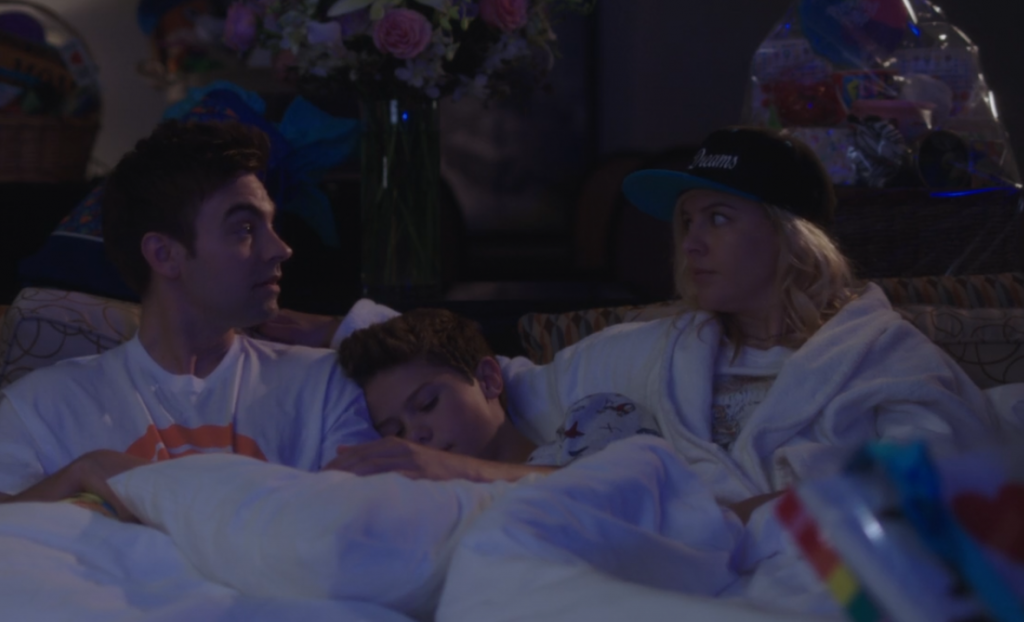 The Other Two – Season 1 (Image: Screengrab)

Frankly, when it came to writing this recommendation for The Other Two, I would’ve been fine with simply stating that this is one of the best comedy series ever! Like, that’s it. Go watch it! But, still, let me tell you why I have such an opinion.

Being successful in the comedy genre can be tricky, especially if the content features a lot of queer humor. You want the audience to laugh with or at the queer characters, not at the entire LGBTQ+ community. The Other Two is able to impressively deliver in this department. And of course, the overall premise is enjoyable, too.

I would share the official trailer for this show but it doesn’t do justice to how hilarious this show is. Also, my advice would be to not watch the trailer. And if you did watch the trailer and it made you decide not to view this series, I urge you to forget what you saw in the promotional content and just play the first episode.

The Other Two has a narrative that goes against the entertainment business. It doesn’t hesitate to poke fun at celebrity and influencer culture. And, at times, it can get meta. Now, while such a narrative might not feel fresh or new to some, the way this series (on Comedy Central) handles it all is what sets it apart.

The Other Two was created by Chris Kelly and Sarah Schneider. Both have an impressive background as co-head writers for Saturday Night Live, so you know you’re in for a good time. Certain SNL cast members also show up in this series.

Basically, the story’s about the Dubek family. There’s the older sister (in her early 30s), Brooke (Heléne Yorke). She dreamt of becoming a dancer when she was younger. We find her working in real estate at the beginning of this show.

Then there’s the middle child, Cary (Drew Tarver), who is in his late 20s. He’s a struggling gay actor who still hopes to make it big while working as a waiter.

And then there’s the third child, the 13-year-old Chase (Case Walker) who finds stardom when his song goes viral. Chase uses the stage name ChaseDreams.

Of course, his instant popularity changes the lives of Brooke and Cary.

What’s so refreshing about this comedy series is that it doesn’t pit Brooke and Cary against Chase. Yes, they were hoping to make something of their lives by now, but the fact remains they both love their little brother very much. Seeing them become protective of him in a very demanding industry is heartwarming.

The scene where Chase decides to sleep between his brother and sister, surrounded by all the gifts other celebrities sent Chase, is very sweet. The Dubek family is very close, and I’m here for it. Again, the closeness of the family and the love between them took me by surprise. I wasn’t expecting their mother, Pat Dubek (played hilariously by the awesome Molly Shanon), to be supportive of all her kids.

Chase being famous doesn’t make Pat ignore her older kids. I loved seeing her attend Cary’s performance in a play and offering help to Brooke get her life back together. I stan a mother who doesn’t discriminate between her kids.

The first season, consisting of 10 episodes, showcases Cary and Brooke’s experiences as they tag along with Chase to attend his music performance, a film premiere, birthday party, high school dance, etc. And with Pat, while supportive, not realizing how Chase is being exploited, Cary and Brooke have to become more responsible. Of course, they fail at being responsible quite a lot, and that serves as the catalyst for a lot of the comedy.

The Dubek family does an amazing job of selling the familial bonds between the members. All of the characters feel like family. Brooke and Cary have an enjoyable dynamic. The two, even if they don’t see it, are very similar. The first season, on multiple occasions, shows the two going through almost similar scenarios in life.

There’s also a sad undertone due to what the Dubeck family had to go through before Chase got famous. So, be ready for that.

The rest of the cast includes Ken Marino as Chase’s very weird manager, Streeter. Wanda Sykes as Chase’s publicist Shuli is always a hoot whenever she appears onscreen.

There’s a lot The Other Two is able to address in its unique cringe and satirical manner. Episodes talk about the industry willing to sexualize kids, the obstacles queer actors have to go through to land auditions, not feeling worthy enough as adults, how publicists manipulate fandoms, being addicted to social media, and more.

As for the queer stuff, there’s a whole lot of it in this show. Seeing Cary trying to figure out where he stands with his “straight” roommate is fun. As far as my opinion goes, I wanted to high-five Cary when he decided to end that particular not-so-healthy dynamic.

Also, the scene where Cary and his friend were talking to each other while acting out a fake sex scene on stage was hilarious. The show called out Hollywood’s obsession with awarding straight actors for playing queer roles and I lived!

And then there’s this gloriousness!

This show is too much!! Lol. I yelled when this scene came on. Can’t wait for “The Other Two” Season 2. pic.twitter.com/HEnTybdfZI

The finale of the first season really took me by surprise even though, in hindsight, it made a lot of sense because you could easily connect the dots between all of the hints the episodes dropped. I can’t wait to see how Brooke and Cary handle the new situation when they return to the small screen.

The series has already been renewed for a second season. With each episode being 20-something minutes, I implore you to consider binge-watching it over the weekend.

You will not be disappointed.

It debuted on Comedy Central on January 24, 2019, and concluded on March 28, 2019. Here’s hoping the second season airs soon. Fingers crossed, it sees a larger fanbase for the sophomore outing.

Have you watched The Other Two? What did you think of it? Let us know.

Previous:The Joker Gets a New Crazy Henchwoman Named Punchline!
Next: As Expected “Harley Quinn and The Birds of Prey” Offers Lowest DCEU Opening at $33 Million!