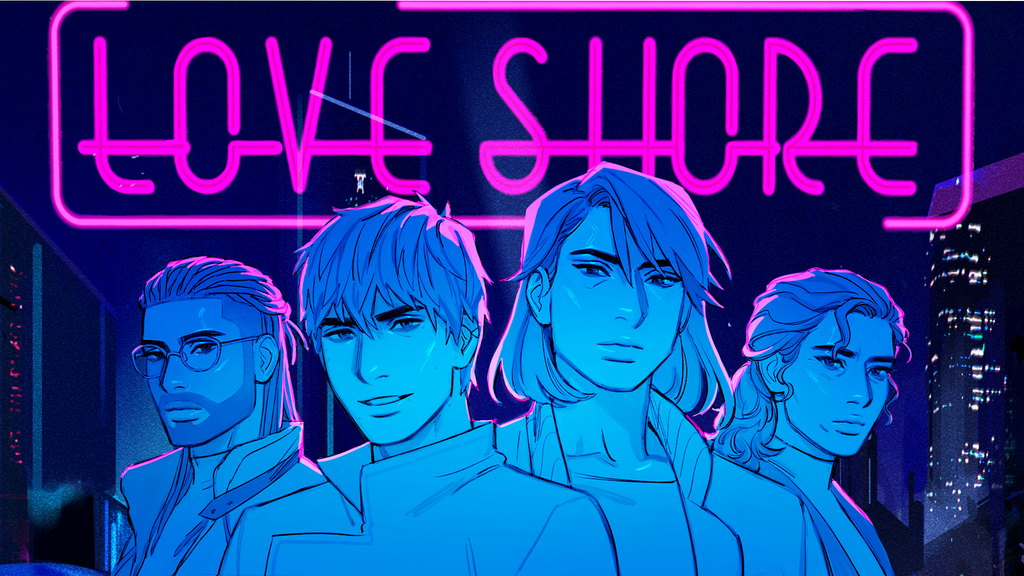 Love cyborgs? Visual novels? LGBT+ and racial diversity? Love Shore is the game you want, and right now they need your support on Kickstarter.

Welcome to Love Shore, a city that transforms at night. The futuristic metropolis also just happens to also be populated with cyborgs, old gods hidden in the depths of a criminal underground, and humans eager to crawl their way to the top, no matter what the cost.”

What drew me to Love Shore were the beautiful graphics and music, which can be experienced in the demo. Mixtures of dark colors, neon blues, pinks, and purples, and a killer soundtrack that changes with each scene, it’s easy to see how much work and passion has been added to this game, all produced by a team of eight!

Players can choose between two characters, Farah or Sam, with each with their own set of friends, and two very different story lines all stemming from the common setting.

After a fertility crisis changed the landscape of the city for good, a single company stepped in to help the residents: Life S. Incorporated, a biotech firm that claimed to be able to build life out of raw DNA, creating a fully formed human with thoughts, feelings, and morality of their own.”

The thirty-minute demo is a small window looking into the immense city that is Love Shore, allowing you to play both Farah or Sam to see the beginning of their stories, their respective companions, and each ending with a mystery that leaves you needing more. And after playing both characters, take the time to replay for a third and fourth round, just to appreciate all the finer art details. It’s just a glimpse of what the development team Perfect Garbage has in store for us!

And as a cherry on top, Perfect Garbage is a team of LGBT+ and people of color! This is a game made for those of us who rarely see ourselves in popular media and in the sci-fi genre. A genre that claims to be diverse, if you’re an alien or a robot that’s white; rarely are people of color or queer characters the protagonists of this genre, but Love Shore changes that, giving players what we’ve been asking for years, diversity in sci-fi.

Perks for backing their Kickstarter include:

Love Shore is the game for lovers of cyberpunk, visual novels, and vast storytelling. Their Kickstarter is live until April 2nd.

Hi! I’m Hazel, and I love video games, cartoons, and talking about intersectionality and representation in media. A cosplayer in my spare time, I love going to conventions to meet creators! My current passions are The Dragon Prince, Voltron, and Umbrella Academy.