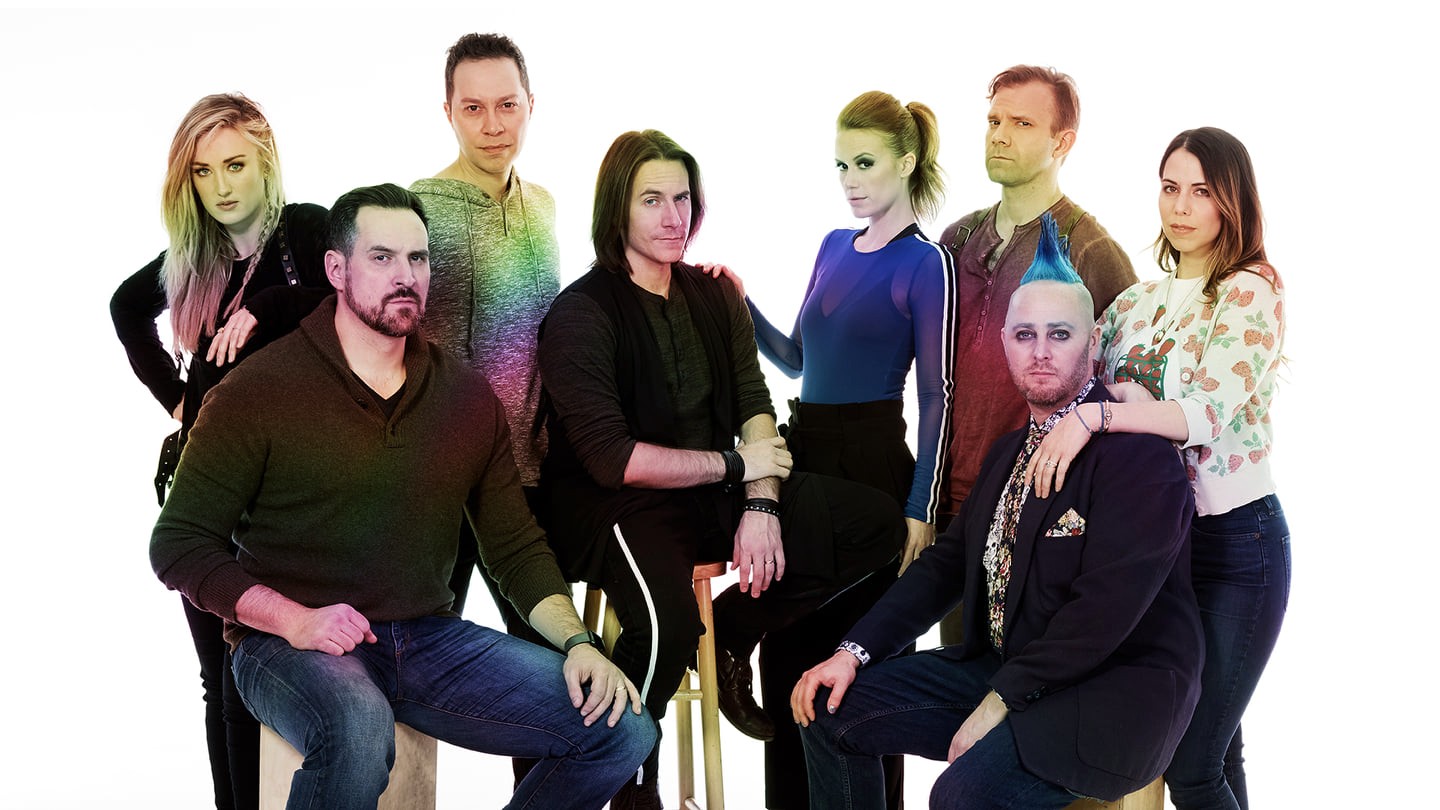 The beauty of Critical Role is that this article will always feel like it’s being written too early.
The unique format that the Dungeons & Dragons Twitch show utilizes means that the characters and plot are a constant, improvised collaboration between storytellers – brand new information is being revealed all of the time in a way that feels natural, even hundreds of hours into this most recent campaign.

The second campaign of the Critical Role crew is rife with queer representation. Many of the PCs (Player Characters) and the NPCs (Non-Player Characters) have been confirmed to be queer on-stream, which, in my personal opinion, is a huge breath of fresh air in comparison to the twitter crumbs of confirmation that were needed for some of the queer PCs in the first campaign.

If you compare not only the number of queer characters between the two campaigns, but also how the representation is presented and handled, I’ve found that the cast of Critical Role has taken large steps to educate themselves and improve.

Just a warning: there will be some light spoilers about the sexuality and gender identity of various characters included in the two Critical Role Campaigns.

There were some murky waters in the first campaign with some of the aspects of the representation in the player characters. While Keyleth, Vex, Vax, and Scanlan were all technically queer, only two of them were confirmed on-stream while the other two were only really confirmed by the actors on Twitter. Whether or not that is good enough confirmation for the audience is entirely up to personal opinion, but the waters get even murkier when we look at those character’s romantic relationships.

By the end of the campaign, each of those queer characters was a part of what could be perceived as a heterosexual relationship. Each of their perspective “romantic endgames” ended up not being all that groundbreaking after all. To be very clear: it is absolutely important to show all aspects of a bisexual relationship and especially how attraction can vary from person to person. The unfortunate part that a lot of queer fans were concerned with was that all four characters had ended up this way, falling into a common trope that happens to a lot of bisexual characters: your character can be bisexual as long as they end up in what can be perceived as a heterosexual relationship.

These were obviously all individual character choices made by the actors, and were most likely just an unfortunate concentration of the trope when used all at the same time.

This isn’t to say that all of the queer representation in the first campaign was problematic; we were given some amazing queer characters in Allura Vysoren, Lady Kima of Vord, Shaun Gilmore, J’Mon Sa Ord, and even Taryon Darrington, though I still have some concerns with the way his sexuality was introduced.

The problematic tropes that did occasionally occur were unfortunate to those who noticed, but none of it was intentionally malicious, and only goes to show that education and growth in regards to representation is always a possibility, and it shouldn’t be given up on after a mistake.

When you consider the roots and format of the D&D show, they could have easily gotten away with maybe throwing the occasional bone to the queer community, if they threw anything at all. 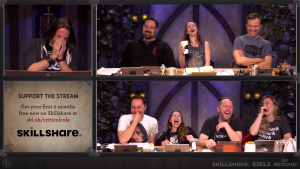 The first campaign of Critical Role started out as the campaign of a group of talented voice actor friends who decided to get together one time and play for Liam O’Brien’s birthday. Two years later, they’d continued playing and decided to start streaming their weekly sessions on Geek and Sundry.

Since this was just a game between friends for a very long time, the fact that we were given any queer representation in a small (at the time) Dungeons & Dragons stream show was incredible.

Critical Role isn’t scripted, and it’s essentially just a group of enthusiastic friends shoving a pack of mentos into a Coke-Bottle world created by Matthew Mercer and hoping something exciting explodes out of it – and it always does.

But trying to look critically at problematic tropes that may appear in a story that isn’t scripted becomes complicated. The usual rules get muddled when you’re talking about an improvised plot and character choices that are made up on the fly vs. a specifically chosen and thought-out moment for a character that serves a much-considered plot point.

For example: if a queer character dies in a scripted TV show, you can argue the Bury Your Gays trope. But in a show where the player just made some bad D&D decisions and ended up with a dead character? You can’t make that same argument because the death was unintended. If someone slips up and uses an incorrect pronoun, it was just a moment of human error and not a problematically-scripted character choice.

The point is: Critical Role was brand new territory of storytelling for an audience, and they could have easily gotten away with a bare minimum of representation, and probably could have easily fallen into the trap of “less representation = less angry queer fans yelling at me online” in their second campaign, especially considering some of the criticism they received during the first.

Instead, the second campaign was introduced, and I couldn’t have been more thrilled with what I was seeing.

Right off the bat we were introduced to Beauregard, played by Marisha Ray: a lesbian human who has a tendency to punch her problems until they disappear. Mollymauk, played by Taliesin Jaffe: a bisexual and genderfluid tiefling with a love for Tarot and the occasional scam. Yasha, played by Ashley Johnson: a lesbian Aasimar barbarian, whose heart is just as big as her bulging biceps.

There’s even been an uptick in queer characters amongst the guest players for the second campaign, which include Reani, the bisexual Aasimar, played by Mica Burton, and Keg, the bisexual dwarf, played by Ashley Burch. Even Calianna, a half-elf sorcerer, was confirmed to be queer by Mark Hulmes, though her sexuality wasn’t brought up on-stream during her short stay.

Queer NPCs created and played by Matthew Mercer are constantly being introduced into the story. There are genderfluid characters, non-binary characters, bisexual characters, pansexual characters, gay characters, lesbian characters – and each character is richly developed and given a personality beyond their queerness, while still respecting that it’s a big part of themselves. They fit into the fantasy world just as naturally as they should. Critical Role shows that queer characters can be high-ranking government officials, royalty, spies, soldiers, powerful mages, diplomats, scavengers, circus performers – everyone is allowed to by anything.

In summary: they’re treated exactly like any other character.

Every time yet another queer NPC is introduced I have to fight the urge to assume what most of television and books have taught me: that it’ll be the last one, that a quota has been filled and I shouldn’t get my hopes up for more.

Because it’s never filled, and it feels like the cast, and especially Matthew Mercer (who has the opportunity to create hundreds of different characters) is aware of this, and understands that people enjoy connecting and identifying with these characters.

That is one of the reasons that I feel an article like this will always be written too early, because as much as I want to shine a light on all of the good queer representation we already have in Critical Role, it feels like there will always be another form of it gifted to us as the story continues.

Not only that, but I also believe there is a very good chance that some of the Player Characters have things about their sexuality that have yet to be revealed, whether it’s because the topic has never been explicitly brought up (asexual Cadauceus, anyone?), or that the character is in the middle of learning a lot about themselves (bisexual Jester, perhaps?).

Those are, of course, just theories, but also character development that wouldn’t surprise me in the slightest.

The cast of Critical Role seems to understand that queer stories and queer characters mean so much to a lot of members of their fan base, and they keep striving to make that a prominent part of the content they produce. It genuinely feels like including this diversity into their story is one of their priorities this time around, and I can’t say enough how much I appreciate it.

No story is perfect and no representation comes flawlessly, but despite stumblings in the past, they continued to create well-rounded and universally adored queer characters.

So, even though this article might feel like it’s been written too early, the representation we’ve been given couldn’t be more punctual.

Critical Role has really upped their game in the quality and quantity of queer representation they have in their second campaign, and I’m excited to see it continue to blossom.

4 thoughts on “The Growth of Queer Representation in Critical Role”