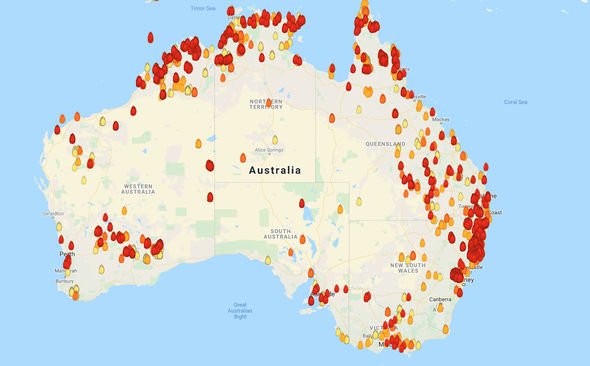 Australia’s wildfires have been raging for months, and the scale of the damage is almost beyond comprehension. But fandom is doing what fandom does best and coming together to raise funds for various relief groups.

At this time, Australia’s wildfires have claimed 25 human lives, more than half a billion animal lives, destroyed millions of acres of land, and caused billions of dollars in damage. Sixty-nine of the 136 fires in New South Wales are uncontained, meaning this catastrophe is far from over so many of these statistics will definitely go up.

Fans from various fandoms have come together to raise funds for various groups in an attempt to provide relief and mitigate the effects of the disaster. We will update this list as we become aware of more efforts, but this is what we’ve found so far.

Please cruise the list and if you see something that interests you, click on the links and chip in!

Disclaimer: We have not been able to verify each individual charity’s merits. We recommend using Charity Navigator to vet whichever organization you plan on going with, or performing a good old fashioned Google search.

There are a lot of ways to help relief efforts in the wake of Australia’s wildfires, so choose what works best for you.

Some of these fundraising efforts also require purchasing items through third parties or donating directly into a private PayPal account. We can’t vouch that the third parties will pass on the funds as promised, and will try to provide direct donation links where available.

If you aren’t comfortable with a particular third party or PayPal account, please select a different option from this list.

Australian actor Chris Hemsworth, most notable for playing Thor in the Marvel Cinematic Universe, has turned to Twitter to rally his fans around wildfire relief efforts. He’s already donated a million dollars for relief efforts related to Australia’s wildfires, and has encouraged his fans to donate whatever they can.

Most of his selected charities benefit firefighters directly, but it’s a pretty wide range and diverse group of organizations.

*The charities with an asterisk next to them are for Australian donations only.

Hi everyone. Like you, I want to support the fight against the bushfires here in Australia. My family and I are contributing a million dollars. Hopefully you guys can chip in too. Every penny counts so whatever you can muster up is greatly appreciated.https://t.co/KcBpMe7QvY pic.twitter.com/gYuA4LELZM

Promare fandom has two efforts going on right now. As we’re a fandom centered around firefighter characters, it makes sense we’d show up to raise funds for this. It’s thematic, if nothing else.

First up, the Promare 2020 Calendars project is giving away digital copies of the calendar to those who donate $10 or more towards relief efforts. Please make sure your donations are time-stamped to receive this particular donation reward. Check out their twitter account for more details.

With that our digital orders for our calendars are officially closed! However, if you would still like to get a copy when the emails are sent out, just take a screenshot of a donation to the #AustralianBushfire via DMs and I will add you to the list! https://t.co/e3dbPoXIQo pic.twitter.com/RniLxD4LC8

Twitter user DenkiMouse has created this delightful piece of art along with links to various organizations helping with relief efforts. If you can’t find anything in this article you’d want to buy, you can cruise this quoted thread and donate directly. A couple notable ones not otherwise linked to in this article include the FoodBank Victoria, Animals Australia, and Port Macquarie Koala Hospital.

promare fandom! we love fictional firefighters so much, but there are some real firefighters you could donate to in australia right now. check out this thread for more info on how to help–>https://t.co/AP1EsSOa63 pic.twitter.com/BtpXpM6wS0

Actress Shoshannah Stern, known for her roles on This Close and Supernatural, has created a charm to raise funds for WIRES, which helps Australian wildlife in distress.

As more than half a billion animals have perished due to the fires (some estimates stating that we’re over 800,000,000 now), this is an excellent and pointed charity effort.

You can learn more about this charity here and donate directly if you aren’t into this particular item.

A member of the Wynonna Earp fandom is auctioning off some signed Chris Evenhuis art on eBay.  Right now they are still deciding which charity will get the funds, but there are several links in the comments to the thread if you want to direct donations directly to whichever one you desire.

The Twitter user has promised to update Earpers with the final donation information so keep an eye out for updates.

For the month of January, all proceeds from comic creator Adam Ellis’s store and his Patreon will be donated to charity. He’ll be spread the donations across several charities with a focus on animal rescues.

He’s open to suggestions about where these funds should go, so send him a tweet if you have one in mind! He’ll be donating in chunks throughout the month, so he’ll probably cover several with his various donations.

For the month of January, I’m donated all profits to combat the Australian wildfires. If you buy something from my store or support my on Patreon, I’ll donate the earnings. https://t.co/6S0lUOLmoH https://t.co/mROtGLh93E pic.twitter.com/bZwKcvcLgp

Fans of KPOP group BTS have already raised over $18,000 AUSD towards relief efforts, and they are still going strong.

Their main donation effort, which is using a PayPal account through the Australian BTS fan Twitter account, is splitting funds between fire fighter related charities and the Red Cross.  The BTS fandom also has a GoFundMe set up to adopt Koalas from NSW Koala Hospital. This one has a $1000 goal. As of this writing they’ve raised $658 towards that goal.

With the fires in Australia continuing to progress, we would like to begin another fundraiser to help those who have been affected by the fires. We believe the power of ARMY can assist us. Any amount helps. Please RT to spread🙏🏼✨

After some discussion & feedback, we have now officially decided that an appeal we will be donating to is the Red Cross & additionally to the fire fighters. The money collected in our Go Fund Me will be used to adopt koalas to help pay for their medical expenses while + https://t.co/VTVpPyV8Aq pic.twitter.com/w3DFZkerkb

Popular artist Boss Logic is selling special prints to raise funds for the Red Cross to help firefighters and their families. The prints can be purchased here.

(Tribute to the fight and the fallen, all proceeds will go to the Red Cross to help the fighters and the families affected by this tragic times) https://t.co/aGgO3SLj64

Various authors are offering services in an effort to raise funds for Australia’s wildfires through the #AuthorsForFireys tag.

Here are a few of them. But please cruise the hashtag for a full list of all the amazing authors stepping up for this effort! There’s a lot of them and I selected a few of the interesting ones or ones that felt relevant to our readers.

All donations should be made to CFA (County Fire Authority). Details about what these donations support can be found on their website.

• Signed copy of my entire back catalogue: The Family Law, Gaysia, Moral Panic 101 and Growing Up Queer in Australia.

• Given at a yum cha lunch on me in Sydney, Brisbane or Melbourne

Want to take your writing to the next level?
Do this & help me help the Fireys in the same breath. I’m offering 10 x 1 hr Skype sessions on anything writing related. Send me an excerpt & we’ll work on making it better. Bidding starts at $150.#AuthorsForFireys #AustraliaFires pic.twitter.com/TeyqLtaTmE

🚨 THIS IS NOT A DRILL 🚨#AuthorsForFireys Item 3!

SYDNEY DINNER WITH DAVID MARR & ME FOR FOUR (4x) PEOPLE AT HIS PLACE.

Come dine with Australia’s most renowned homosexual and foremost literary icon … as well as David Marr!

Assemble mates + bid by replying to this tweet. pic.twitter.com/VuyqQX4i6V

#AuthorsForFireys The awaited big item! A mega pack of contributions from some of the best and brightest new fantasy writers – usual rules, bid in AUD by reply to THIS tweet (details of contents are below cos it’s too big for one tweet) – bid early, bid often, bid generously! pic.twitter.com/d5KxsjrN2A

I’m writing the sequel to THE CRUEL STARS. If you would like to be a space commando who punches Space Nazis in THE SHATTERED SKIES, put your bid in below.

Update: Thanks to the tip from a reader, we have a couple of Stranger Things fan initiatives to add to the list!

Actor Dacre Montgomery (Billy Hargrove) has set up a GoFundMe, which will benefit the Red Cross.

There are a few fan efforts to raise funds for Australia’s wildfires that aren’t fandom specific, so we’d like to drop some of those links here!

🐨 Australian Wildfire Relief Raffle 🐨
-Winner will receive a fully custom bat plush of their choice
-Please RT
-Donate at least $5 to an organization to enter, each $5 is one entry
-Submit a screenshot to the google form below
-International are welcome pic.twitter.com/blffIQUKJJ

Help our Aussie wild life! Over half a billion animals have perished in this years bush fires.

All profits from my koala pin will be donated to the Rescue Collective to help fund their efforts.https://t.co/uVBn9VQM64#AustraliaFires #AustralianBushfire #AustraliaBurning pic.twitter.com/QtmmUXvnZ3

Hey guys!
If you are donating or have donated towards firefighters or saving wildlife in Australia, I’ll make you a sketch!
Send me your receipts over $15 a sketch

[RT 💜]CHARITY FUND for AUSTRALIAN FIRES
Australia is burning, fires have killed half a billions animal & many people are in danger.
100% profit from selling this pin will be donate.
*Price: 10$
Deadline:
* For order: 10th Jan
* For Payment: 17th Jan
👉https://t.co/fivq2WhRqM pic.twitter.com/kmIIuiVdp4

Have Another Link For Australia’s Wildefire Relief Efforts? Share them!

I know we’ve missed a lot because, unfortunately, I can’t have an eye on every fandom everywhere.

So if you’ve got a fandom-centric effort aimed at raising funds for relief efforts for Australia’s wildfires, please drop a comment below with relevant links!

We’re happy to add it to the list no matter how small.  Every little bit helps.