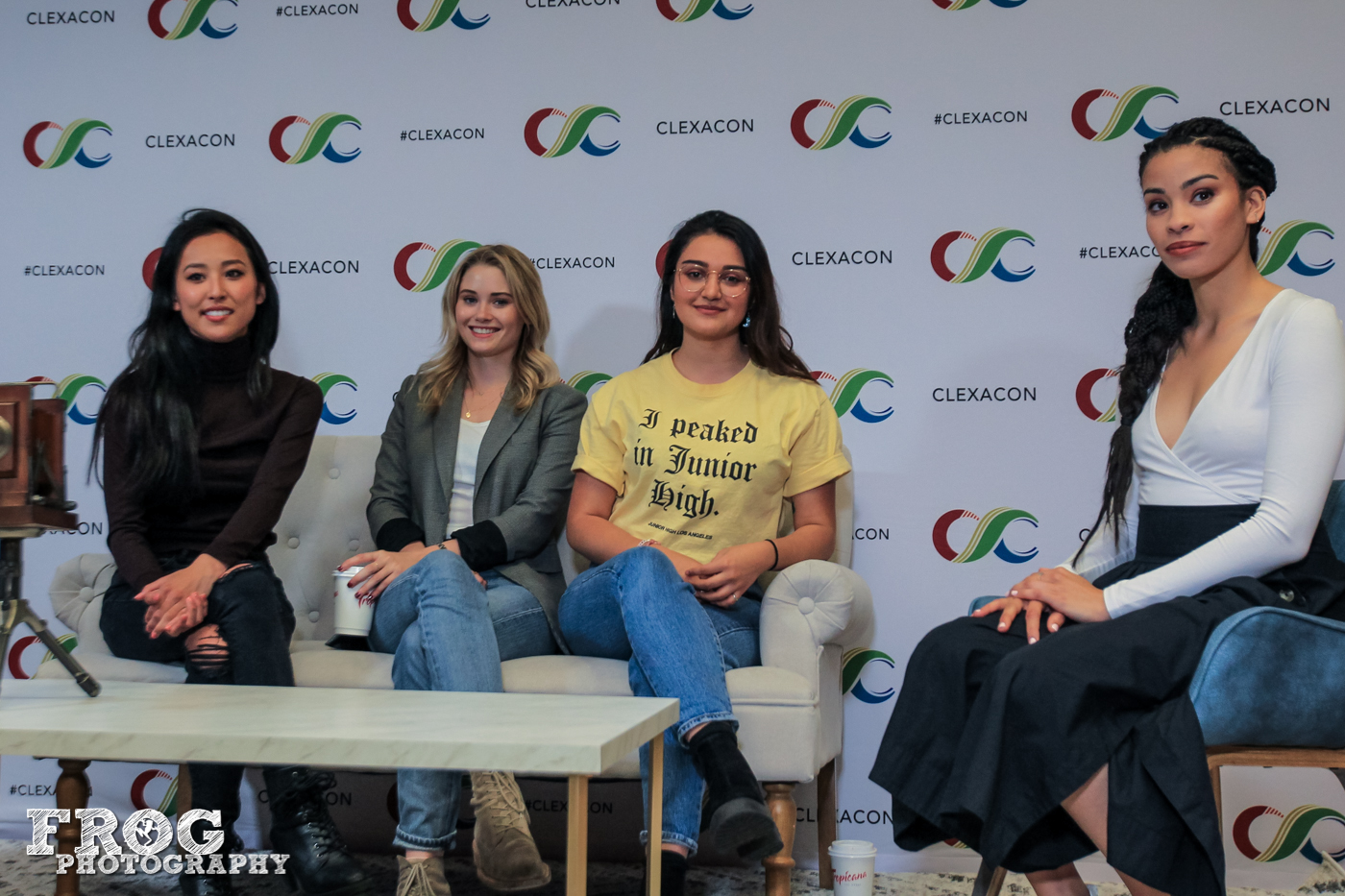 This past April, I met with the ladies of Marvel’s Runaways (Lyrica Okano – Nico, Virginia Gardner – Karolina, Ariela Barer – Gert, and Clarissa Thibeaux – Xavin) at ClexaCon during the press roundtable. While they could not yet talk about Season 3, we discussed representation, fandom and acting opposite dinosaurs! 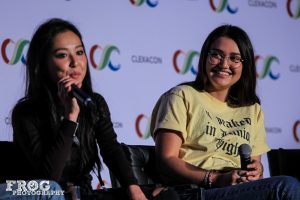 Ariela, you’ve insinuated on Twitter that you might not be straight, which is really refreshing to hear. Can you talk a little bit more about why that is important to you?
Ariela: I’m not making any official statements here, but I think that a young feminist in 2019 is someone who would explore her sexuality, and sexuality is a fluid thing. I think that it is absolutely something I want to explore. I think Gert is absolutely someone who would be exploring that at this time in her life. Chase has preoccupied a lot of the space in her brain at this point. With Isabella Gomez, we joked that she should play Victoria Mancha and then the new plot line in the comics should be Gert & Victoria.

Nico & Karolina’s first kiss in episode nine in the hallway is such a huge, iconic moment. What was it like filming that scene? Was there a lot of a pressure to get it right?
Lyrica: I don’t know if I would say pressure. We were just really excited, really excited.
Virginia: We’ve built it up in our heads for so long. We wanted it to be innocent. We were just excited to do it justice.
Lyrica: From my perspective, Nico wouldn’t have any idea of what’s to come going into it. I kind of put myself in Nico’s mindset. I was aware that Nico always had a feeling that there could be something going on between her and Karolina. That was my emotion going into it. Then when it did happen, it’s just, “Oh, everything clicks.” This makes so much sense. Yeah, that was my feeling.
Virginia: I think we were both were really excited because obviously we both read the comic books and really wanted to explore this relationship with the comic books.
Lyrica: As an actor, I was very aware that this is a beautiful moment. It is the first Marvel kiss between two female superheroes. That was obviously on my mind. It was going to be a big moment and I wanted it to be portrayed beautifully and as honestly as possible. 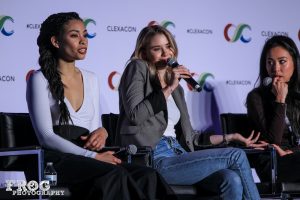 Clarissa, were you nervous about your character being thrown in the middle of Nico and Karolina’s storyline because of the fandom’s reaction?
Clarissa: This is probably the biggest project I’ve worked on in my career as an actor and I was waking up constantly forgetting that I had booked the show. I don’t think I had quite mentally realized, “Oh, there’re all these fans and they’re all shipping this relationship and you’re coming in now to start possibly a new relationship and they care a lot.” It was only apparent right afterwards. I was taking the time and looking through comments and looking to see what fans were saying. And I was like, “Oh wow, this is going to be a big deal!” This is going to be a big emotional deal for a lot of people who have supported Nico and Karolina for so long. I don’t think I was nervous. I was more nervous to just be on the Paramount lot more than anything. (laughs)

During the panel, somebody asked you which Marvel character would you like to come on the show, but if each of your characters could go to another one of those shows, which would it be?
Virginia: I’d love to see Karolina and Jessica Jones. We talked about that earlier.
Lyrica: You’d bring some light into her world. (laughs) For Nico, Jessica Jones too. But then I feel like it would just be a lot of just heaviness.
Ariela: Oh, I don’t know if this counts and I might get in trouble for this, but Legion. It’s Marvel, too. I love Legion. I would so love to be part of that group.
Clarissa: Honestly, it would probably be Jessica Jones, too. I really love bad-ass females. 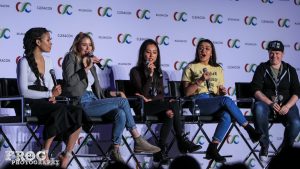 The show is either very physical or relies on your imagination, like working with a dinosaur. How did all of you prepare for that?
Ariela: Working with the dinosaur has changed the way I look at all animals because it’s such a realistic looking thing and the connection that they have. I would go home and be very attentive to my cat, to try to feel it which helped a lot. But now, looking at animals is weird to me because I see the robot eyes but then I’m like, “No, that’s a soul.” Then I go back to the robot and I’m like, “This is not a soul.” (laughs)
Lyrica: For me, the first season was pretty technical. It’s about doing it at the right timing, holding [the staff], switching it out and the spell and all of that was going to be edited afterwards. Season two became more of a psychological connection to the staff for Nico. That was interesting. I’m really excited to see where season three takes Nico and the staff. It’s going to keep evolving into something probably darker.
Virginia: For me there wasn’t a whole lot. Part of it is finding a way to shoot light that obviously isn’t actually coming out of my hand and not look dumb while doing it. It’s a hard thing to try to be able to find that balance of what to do with your hand in a way that kind of looks natural but still looks kind of cool. For the flying stuff, they just throw a harness on you and you just kind of go for it, which it’s pretty uncomfortable no matter what way you cut it. There’s no way we’re really prepared for that. There was some technical stuff about how she was going to land, it not looking a little bit too Jesus-y and find a way to make it look like a bit more natural. There’s like some finessing I guess that goes into that.
Clarissa: Because my character shape shifts into so many people, there was a lot of one person doing the scene and then I would do the scene and then they would do the scene again and find the space in between, working with the VFX coordinator. And he was like, “Okay, so in this very second, this is when like [makes fuzzy gesture] is going to happen.” In the end of season 2, Ariela was playing me and she was doing something with her hands. I was watching the monitor thinking what is she doing with her hands? Because I would have to do the same thing to be Xavin. It really is just studying everybody else. They’re playing me, playing them, so I’m playing me pretending to be them, but then becoming me again and retaining the things that were them for a moment. Yeah, that makes sense. (laughs) It basically is Inception. That’s as complicated as it gets.

Ariela, is there any other latinx superhero you would like to be in DC or Marvel?
Ariela: America Chavez. Hands down. I was researching her for so long. I thought she was going to be whoever I was in this Marvel universe because I used to research Marvel stories all the time to be “what can I do?” I was obsessed with America Chavez. I was like, “I’m going to be her”. And then I was Gert, which I’m not mad about. (laughs) I love that we got to turn a superhero who isn’t Latinx into a Latinx Superhero, but America Chavez is amazing. 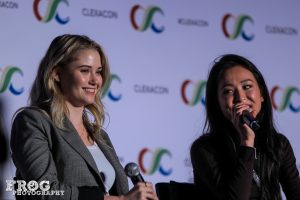 Since you are at ClexaCon, what does this convention represent for you and why do you think it’s important that we have conventions like this one?
Clarissa: Representation. Just visibility in general, the community, being able to highlight these stories and highlight the people who find something important in them is so beautiful. This whole con gives a platform for that.
Virginia: To be able to interact directly with the people that have been really affected by our show and a lot of our fans has been really life changing. It’s really nice to be able to have those conversations and see directly because we’re on a lot and we’re shooting crazy hours. It’s easy to forget how affected people are by the show in a really positive way. It’s awesome to come here and meet people that are so affected. It’s definitely inspiring for all of us. This is why we do it, for us to be able to provide presentation for stories like this.

Ariela, there’s a lot of talk with Deanaru [ship name for Nico and Karolina] of course, but what do you see as the future for Gert & Chase or what would you like to see romantically?
Ariela: I mean he’s going to have to do something to make up for season 2. (laughs) I am gunning for Gert but she is not just going to take him back after that. He has to prove himself. Also, the thing about exploring her sexuality: she is a young woman in 2019. This is a time where people aren’t so confined to a label or the box that they have been put in. Maybe without Chase in her mind, she can explore different parts of herself. That’s what I’ve been pushing for. 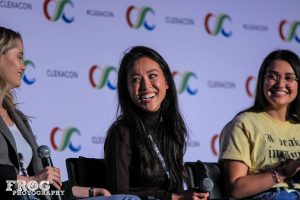 Lyrica, how was it to learn the script for the last episode of season 2 where are the words are mangled?
Lyrica: That was really interesting. For me, I put some thought into what every word that was mixed up meant and what she was trying to say. I would go to Quentin who wrote that episode and ask him what she was actually trying to say. With “I lamp you”, I had no idea that it would become such a thing. It wasn’t that hard, it was fun. It was a fun episode. I think it was the first episode where you’ve seen Nico so out of control, not having her stuff together. I think that was interesting for other people to see, too.

One thought on “ClexaCon: Interview with the Ladies of Marvel’s Runaways”