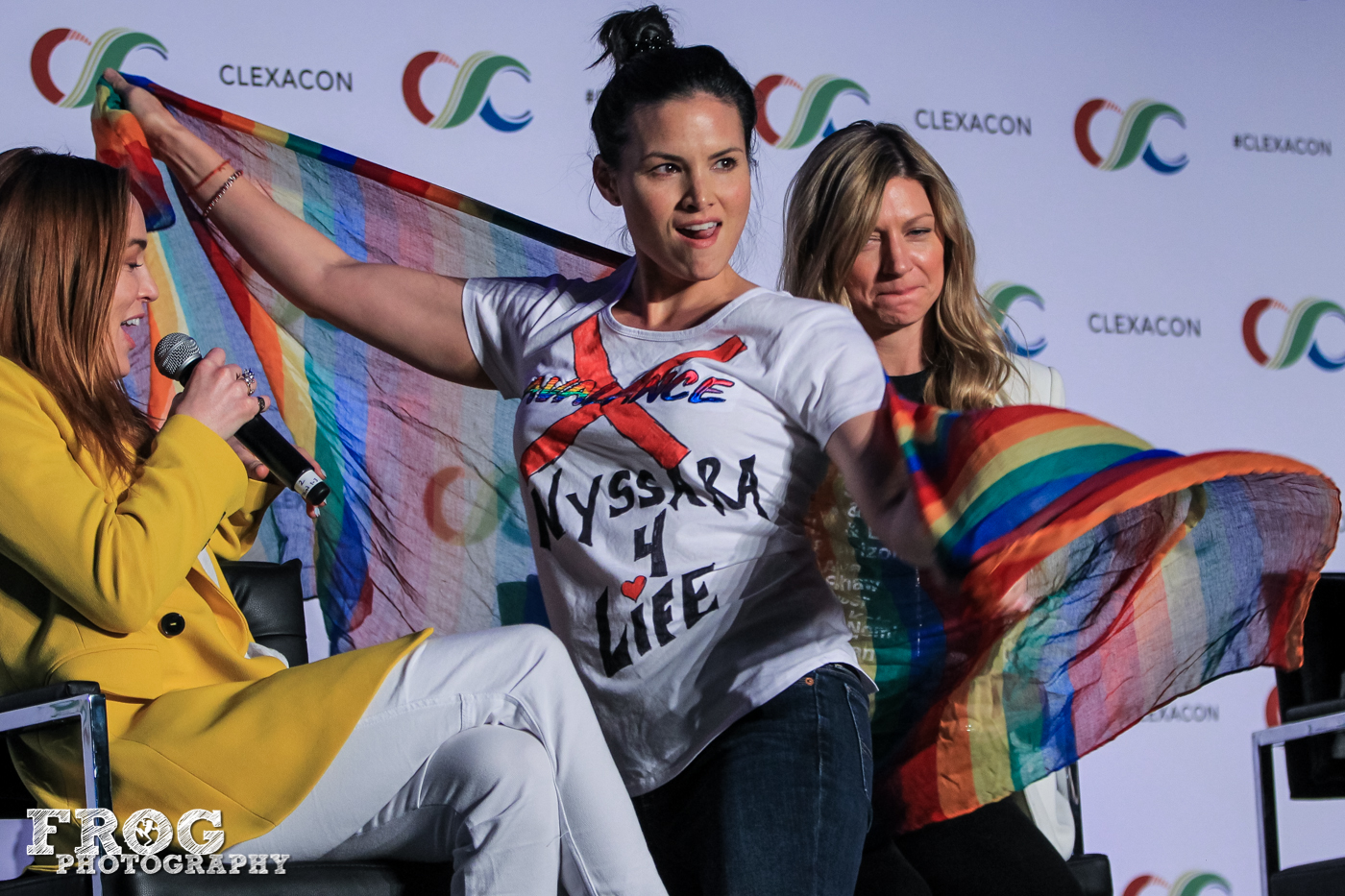 This past April, Las Vegas welcomed the 2019 edition of ClexaCon, a convention for LGBTQ+ women and allies.

Now in their 3rd year, ClexaCon organizers have had time and experience to prepare a great con. This year, there were some good and not-so-good parts. Here is a quick summary of ClexaCon 2019. 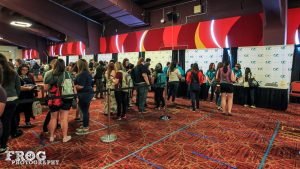 – Compared to last year, the whole con felt a lot less crowded. It was much easier to move around and time in line was shorter. I believe moving the photo ops studio outside of the main hall helped a lot. The schedule was engineered better to allow people to attend most of the big panels. Some people complained about scheduling conflicts but to be honest, conflicts can never be avoided at cons. There are simply too many options – which is hardly a bad thing.
– One of main reasons people attend conventions are the celebrity guests. This year, ClexaCon had quite the line-up: Annie Briggs (Carmilla), Briana Venskus (Supergirl, The Walking Dead), Caity Lotz (Legends of Tomorrow), Chantal Thuy (Black Lightning), Crystal Chappell (Venice), Dominique Provost-Chalkley (Wynonna Earp), Dot Marie Jones (Glee), Elise Bauman (Carmilla), Emily Andras (showrunner, Wynonna Earp, Lost Girl), Guinevere Turner (The L Word), Isabella Gomez (One Day at a Time), Jes Macallan (Legends of Tomorrow), Katherine Barrell (Wynonna Earp), Katrina Law (Arrow, Spartacus), Mandahla Rose (Forever Not Maybe), Nadia Bjorlin (Days of Our Lives), Nafessa Williams (Black Lightning), Natasha Negovanlis (Carmilla), Nicole Pacent (Anyone But Me), Lyrica Okano, Virginia Gardner and Ariela Barer (The Runaways), Amber Benson (Buffy the Vampire Slayer), Lesley-Ann Brandt (Lucifer), etc. We met the actresses from several shows and talked to them about their characters and the importance of representation. You can read our interviews here: Marvel’s The Runaways, One Day At A Time, Legends of Tomorrow (Jes Macallan) and Black Lightning. Legend Rita Moreno making an appearance by phone during the One Day At A Time panel was easily one of my favorite moment of the con.
– Besides the show panels, ClexaCon hosted many panels aiming to cover as many topics as possible: Marketing and Selling Lesbian Fiction, Trans Representation in Media, The Misconceptions of the Plus in LGBTQ+, Creating Diverse Stories Without tokenism, Building Inclusive Communities, Podcasting, How to Run Social Media Like a Pro, The Importance of Queer Representation in Burlesque, etc. Several panels like Gaysian: Queer Asian Representation in the Media or Queer Black Representation in the Media were full and could easily have been upgraded to a larger room. 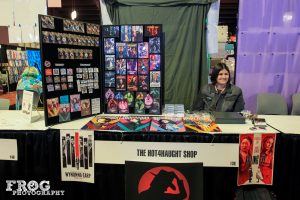 – The vendor / artists alley section was a great place to be at as usual. As I wrote previously, this is the only con where I have been able to find specific f/f content to buy. This year, I saw plenty of One Day At A Time, Black Lighting and Killing Eve merchandise added to the usual Wynonna Earp or SuperCorp. Plenty of artists customized their offerings for the con, which was great in case you didn’t know what to have the actresses sign at their autograph table. I personally stocked up on all things Captain Marvel because even after the movie release, it’s hard to find art that is not oversexualized.
– The Tropicana Hotel in Las Vegas is ideally located: on the Strip but not right in the middle of it so the craziness that comes with it is limited. The con is fully hosted in the north tower, which isolates it from the casino floor and reinforces the feeling of being in a bubble.
– As a member of the Press, I really enjoyed the organization this year. Having a clear schedule and a dedicated room set up especially for interviews was a bonus that helped a lot.

The Not-So-Good
– Right before the con, questions were raised about ClexaCon’s accessibility policy when it was announced that there would not be any accessibility stickers. When asked about accessibility during autograph/photo op lines, an attendee was told to bring their own folding chair. Many asked ClexaCon to review their wording and policies, which they did about a month later. Despite this, they failed to advertise that their Saturday party was not wheelchair accessible. 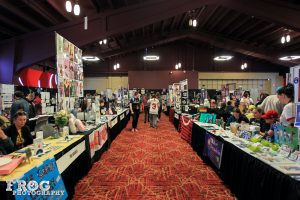 – After the con, the hashtag #Clexapocalypse started to appear on twitter, mainly used by vendors. They aired their frustrations with the vendor organization stating there was barely any support from the con: no sign letting people know where the vendor hall was – leading to poor sales, barely any mentions of the vendors pre-con (no vendor map available), several vendors were charged a different amount for the same table/service, no vendor coordinator like the other years… I am still wondering how all of this happened knowing how smooth everything went the two years before. A few days after the con, almost all the non-executive staff resigned. A clear sign that something is happening behind the scenes. I am very interested to see how everything will unfold next year.
– This next point is not the organizers’ fault. While many things are in their control, they are not responsible for the behavior of some of their attendees. Several non-cisgendered or non-lesbian attendees reported being misgendered or mocked during the con. I did not personally see any of these behaviors but as a white cis woman, my privilege most likely shielded me from it. Many people wore stickers/pins with their preferred pronouns and it boggles me that within our community we are not capable of respecting someone’s identity. 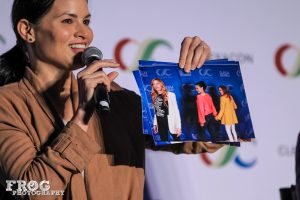 – To put it simply, the photo ops this year were a tragedy. As a professional photographer, I am appalled that a con would even propose photo ops with such low quality at this price: the pictures were not sharp, the white balance was off, the lighting was terrible and created huge shadows, the framing was wrong, some pictures were lost, the staff was not very professional, you had to give up your phone during the photo op and try to find it again amongst 10 other phones behind a curtain… Photo ops are expensive and the level of service they provided is shameful. I offered to fix pictures on twitter for free and got about 20 requests in two days. It shows how bad the results were. In my opinion, ClexaCon should hire EpicPhoto like in 2017 for their photo ops. They are professionals who actually know what they are doing.

All in all, it’s good to remember that you can love something and still be critical of it. I had a great time at ClexaCon 2019, but it is clear that there are issues that the organizers need to fix. Wanting things to change for the better is perfectly valid. I hope ClexaCon organizers realize that and work on improving next year.

ClexaCon will be back in Las Vegas on April 16 to 19, 2020. They have already announced The L Word’s Kate Moennig, Sarah Shahi, and Leisha Hailey as well as the always lovely Amy Acker. Tickets for the the 2020 edition will go on sale July 21st.