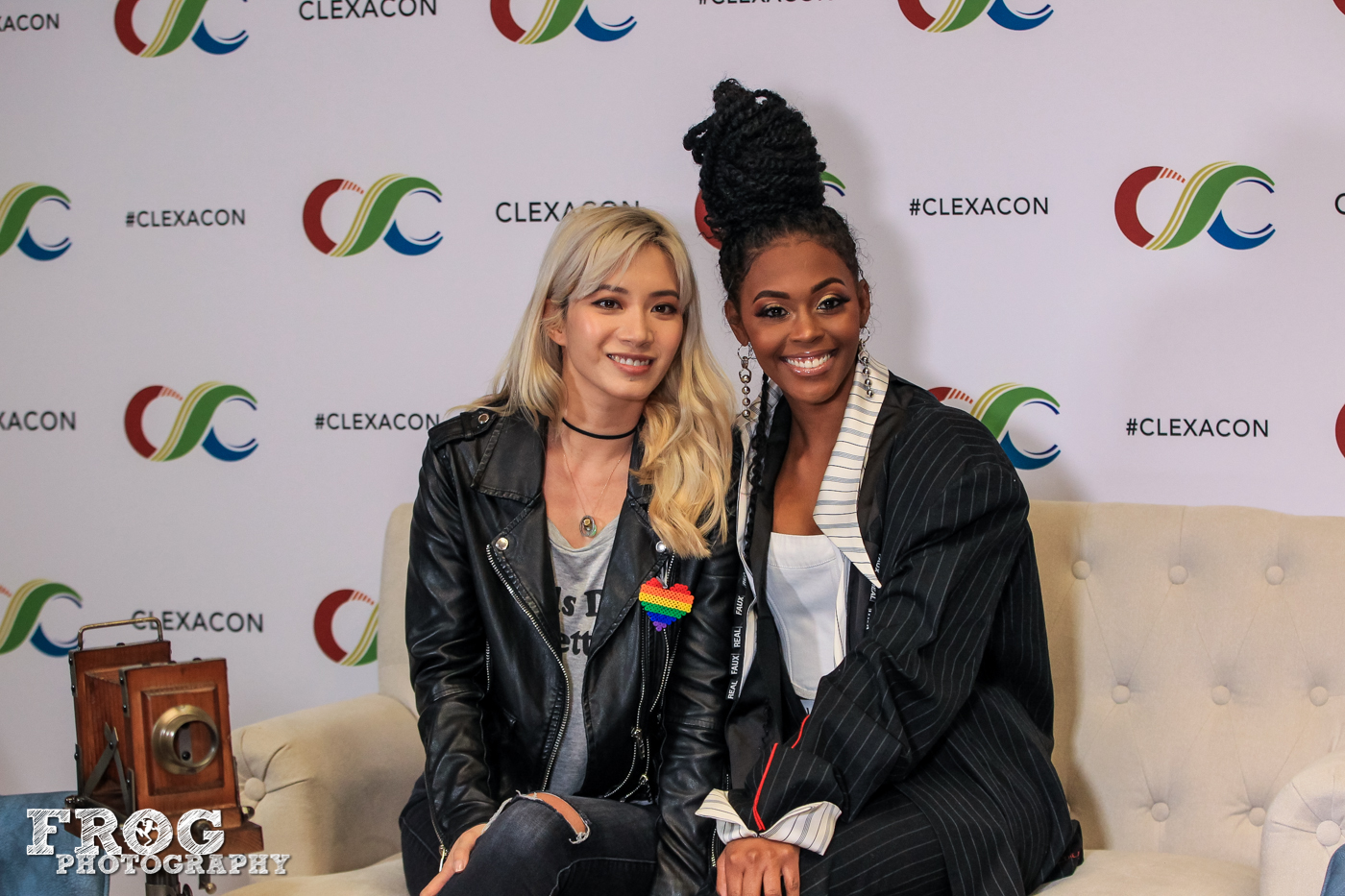 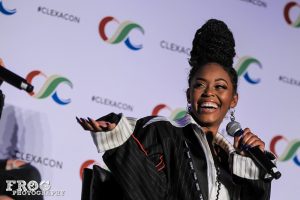 How do you expect the reunion between Anissa & Grace will be?
Williams: I think the reunion will be satisfying for Anissa. I’m tired of crying about Grace (laughs). She has stressed Anissa out. I think it’ll be really gratifying and rewarding for her. And peaceful. The main thing that Anissa wants to know at this point is: is she okay? What’s really driving her up a wall is that she doesn’t know anything about what’s going on. So I think it’ll give her a piece of mind.

How will Anissa react to Grace having powers?
Williams: I think that she will be understanding because of herself having superpowers. It will be a relief knowing that she can let her hair down and be honest about who she is. I’m really excited for that moment.
Thuy: I think it’ll be a shock. Once the discovery happens and I’m sure there’s going to be a ton more drama because it makes a good story.

In Hollywood, especially black Hollywood, there’s been a lot of conversations about hair and make-up and making sure that whether it’s a TV show or movie, there’s someone there who knows how to do your hair. Could you talk a little bit about that?
Williams: The sad part is that you don’t know if they’re going to know what they’re doing or if there’s going to be a hairstylist that represents your hair or understands your hair or know how to do your hair. For me, I always just come ready because I’m always really afraid of that happening. I figure if I come ready and I let them do a little bit, brush it down, then I’ll be taking care of. But I love that we’re having the conversation about making sure we have African-American stylists in our make-up rooms on set. Now that the conversation is being had, I hope that we’ll definitely see the change and we will. I try to bring my hairstylist with me everywhere I go. She’s been doing my hair since I was 16, so it was very important to me. Black women, we don’t really like to switch up on our hair stylists. We like to stick to somebody. I love that we’re having the conversation. It is pretty sad that it’s taken this many years to get to this point. I think the shift has happened in Hollywood. We have a great team on the show. I’m really grateful and blessed to have a great African-American stylist by the name of Caprice who has been in the industry for about 20 years. She knows exactly what she’s doing to my hair. I completely trust her. That was very important when creating our show that if we’re going to tell the story of a black family that we’re very authentic with how black women change their hair and how many times they get their hair done in a day or week. You all see how many changes I have on the show! (laughs) That’s true to who we are as a black culture and as black women. It’s really cool telling that story. 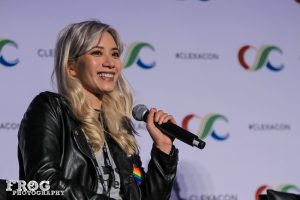 A lot of times, superpowers are seen as a metaphor for a person’s kind of inherent queerness. How do your characters’ superpowers relate to their experience with being LGBT?
Thuy: I had a thought about the shape-shifting element in terms of bisexuality, the fluidity of that experience and that being represented in these powers. It’s there and there’s an acceptance of it. But then being in an intimate relationship with someone else with that experience can be a process. So that’s how I kind of see that happening.
Williams: I think the parallel for Anissa coming out and coming into her own as Thunder, she pulled from the idea of being really bold. She was really bold and coming out; as you can imagine, Anissa probably didn’t give a damn about who cared about who she was or who she wanted to be. I just took that strength and that boldness and applied that to her journey as coming out as a superhero. Obviously, she didn’t go preaching to the choir about it and telling everybody, but she was very bold and confident in her decision in wanting to be one. I think it was the same parallel for coming out as a lesbian.

Thunder is a powerhouse of a superhero, which is absolutely great to see. Is there any DC villain you’ve looked at and think: I want to take them on?
Williams: What about The Joker? I still got some issues with The Joker. Being as though I’m a superhero now, I got some things to take up with him. Because that was my first memory of a villain growing up as a kid. I got some stuff I could take out on him. (laughs)
Thuy: The Brain from the Outsiders.

How has been your experience with queer fandom as opposed to other roles that you might’ve played?
Williams: It’s been so rewarding. I tell my friends all the time, I feel like this character is the most effective character than I’ve ever played before because she speaks to such a large amount of people who at one point didn’t feel like they were seen and represented. As a black woman in this industry, seeing the women who have come before me, what they had to go through and the trials that they had to go through so that I could be here. I understand. And I have compassion for the LGBTQ community and wanting to be seen. I know what that feels like as a black woman wanting to be seen in this industry. So I can imagine a black queer woman wanting to see themselves. Representation is very important to me. It’s why I took this role. It’s why I fight so hard and I’m so passionate about this character. I had a woman come up to me last year at ClexaCon and she said after seeing Thunder that she felt normal being a lesbian. To me, that was the most rewarding response that I have gotten. It was very overwhelming and gratifying. It makes me feel like this character is really touching people’s lives.
Thuy: For me, for instance, after I did a play, I would get people in Whole Foods or Trader Joe’s going: “Oh, I saw you on the play. That was awesome.” But if a fan from Black Lightning meets me, I get such a personal story, like, “I relate to your character because here’s my story, here’s how it affects my life.” And there’s a deeper experience that I gained from interacting. Even here you have people I’ve met through the day today or messages I get on Twitter or on Instagram. It becomes a very personal exchange of this story reflecting someone else’s story.
Williams: I think I even had someone say to me earlier that Thunder saved her life. I’m getting teary-eyed just really thinking about it. It wasn’t so much because she was a lesbian. She said that it was how strong and bold [Thunder] was that encouraged her to find that strength within herself. She was getting bullied and the character saved her life in a sense of gaining confidence for herself and wanting to continue to live. It just struck me when you said a personal story because when you come to comic cons and when you come to ClexaCon you get really personal, deep stories and experiences.
Thuy: Yes, I don’t want to give anyone a handshake. I want to give them a hug. That’s the difference, I think. 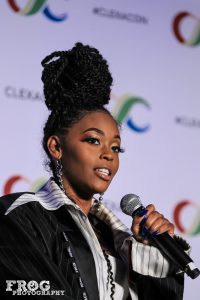 How does it feel to have a better costume than Black Lightning?
Williams: (laughs) Well, the show is called Black Lightning. I love Black Lightning and his costume. Blue’s my favorite color. I’m like a kid whenever I see his costume. I can’t really say that my costume is better cause I really love his and that’s the name of the show. So I’m gonna watch my mouth. (laughs) They’re all wonderful and they all come together. That’s exciting. […] I saw a peek of all three of us just side by side in our costumes. And I was just watching a beautiful black family. We’ve never seen that in live action on television. I can’t say it enough, I’m still grateful for this job the same way I was when I first found out that I booked it. Telling this story and being a part of this show, which is so dynamic and historic will never get old to me.

On TV, often when we see interracial couples, it involves a person of color and a white person, but you guys are not portraying that. What are your feelings being able to portray this on TV?
Thuy: I feel like we’re portraying life from a very diverse perspective that doesn’t have the lens of a white studio.
Williams: How many Asian superheroes do we know? It’s really time for change and we’re tired of seeing the same thing on TV. It’s really beautiful to have such a diverse relationship that we are not used to seeing on camera. We also have to give credit over to the creators of the comic comics because we’re just really paying homage.

Being that you are both superheroes, what would be your wish for a superhero ability?
Williams: I wish that I knew how to fly because I don’t have a lot of time these days and the west coast/east coast back and forth. Time is of the essence and I’m always traveling. I’m always on the go. So if I knew how to fly, I’d be a real bad ass.
Thuy: I was going to say fly too because I like being in the air, but then I think maybe time travel to experience different eras.