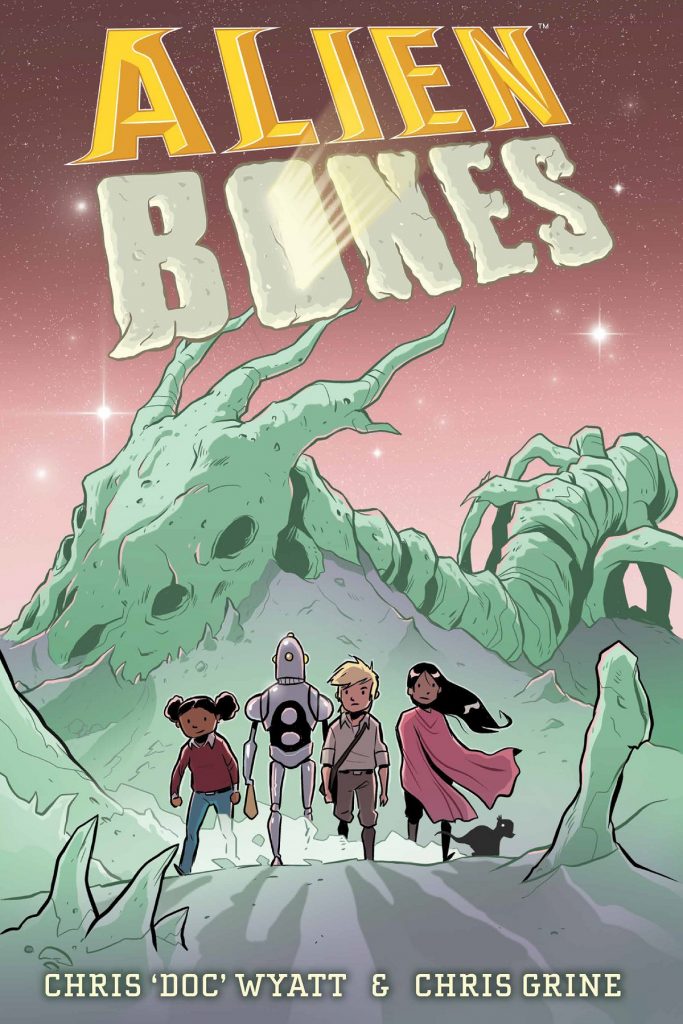 In celebration of October being International Dinosaur Month, enthusiasts have the Alien Bones graphic novel to look forward to.

The release of Alien Bones has been timed to the month-long celebration of the prehistoric giants. The graphic novel is from Emmy nominated writer Chris “Doc” Wyatt (Marvel’s Rocket and Groot), Eisner nominated artist Chris Grine (Time Shifters) and 1First Comics.

Here on Earth, more than a thousand species of dinosaurs have been named and identified. But what about— alien dinosaurs? ALIEN BONES is the story of Liam Mycroft, a ten-year old and his paleontologist father who search for dinosaur bones. When his father goes missing, Liam and his intrepid rag-tag team—his best friend Dianna, his robot Standard-5, his tiny pet dino, plus an unwelcome holographic companion—must travel the universe to find him. In the process, they battle space pirates, escape from the clutches of terrible beasts, and stumble across a massive secret that could impact the entire human race.

“When I was a kid, the idea that there might be other planets out in deep space, beyond our solar system, was widely accepted, but wasn’t yet proven,” said Chris “Doc” Wyatt, the acclaimed television writer and film producer (Napoleon Dynamite). “Now I’m a dad and there are literally thousands of exoplanets that’ve been pinpointed. I was inspired to tell the story of ALIEN BONES because I wanted to thrill my son with an adventure that brought together one of his passions—dinosaurs—with a story that inspires wonder and curiosity about the cosmos.”

“Whether you’re a young kid going through a dinosaur stage or a scientist who loves comic book adventure, ALIEN BONES has something for everyone who’s ever dreamt about digging for fossils,” said Alien Bones co-creator and artist Chris Grine.

The graphic novel is on sale from 1First Comics in bookstores today and will be in comic shops on October 2, 2019.

Chris Grine has been writing and illustrating comics professionally since 2006. He has had work published by Dark Horse, Image Comics, Scholastic, Lion Forge, First Comics, and others.

1First Comics is the “original” successful independent comics publisher which began when there was only Marvel and DC Comics.

Feel free to share your opinions about Alien Bones with us.