“Amberlough” Is Beautifully Written and Will Probably Make You Miserable 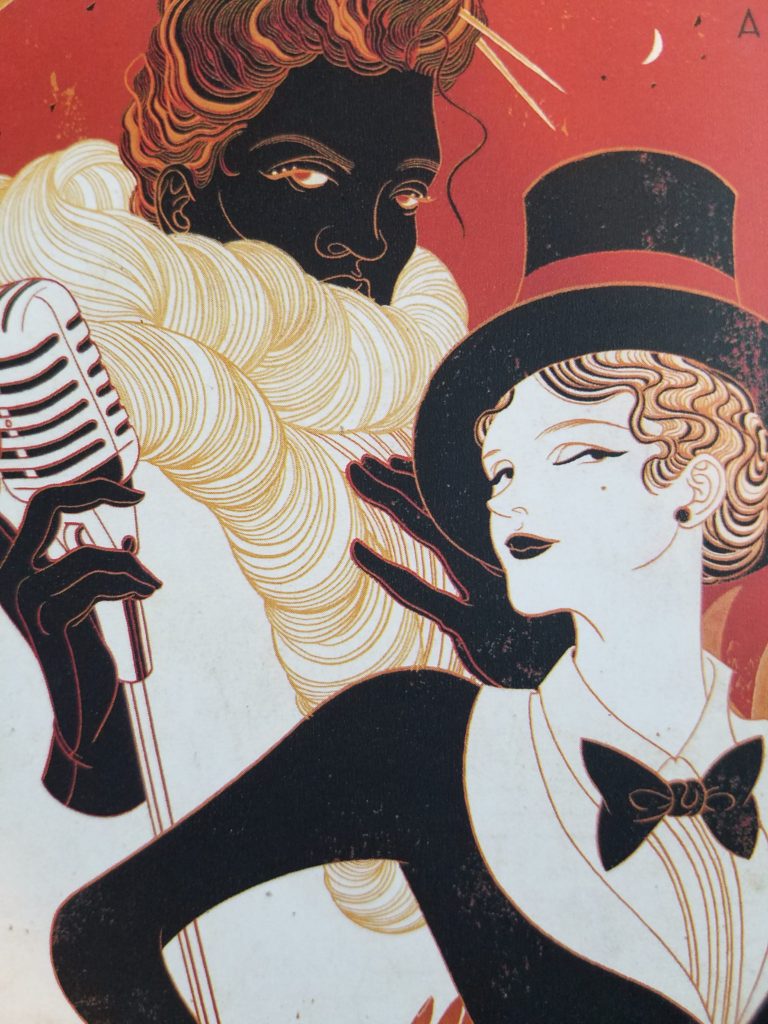 When I got this review copy of Amberlough in the mail, I was immediately interested. Sexy 20s style cover art? A dashing playboy spy trying to save his smuggler lover? Yes, please! For the first third of this book I was enjoying a story that was bright but gritty, fast but deep, and full of flawed characters that I got invested in rather quickly.

First off, let me say that this book is quality literature. There are a few weak spots where something important isn’t exactly explained like (highlight for spoilers) when a character gets some fingers cut off but the book never specifies how many. Other than that it’s a tight, well-crafted story. Lara Elena Donnelly knows her stuff. It’s hard to believe this is her debut novel; she knows right where to hit the reader for maximum feels.

Amberlough is the story of Cyril DePaul, a secret agent who is a bit too attached to a smuggler he’s meant to be investigating. Aristide Makricosta is a smuggler by night and works at a cabaret by – well, by night also, but a bit earlier in the evening. He’s a busy guy. Cordelia is a dancer at the Bumble Bee burlesque where Aristide works as well, as one of the runners for his smuggling trade.

They live in the riotously baroque, amiably corrupt Amberlough. A “conservative” political party is trying to force the four states of the loose confederacy Amberlough is part of into one unified nation. There’s no hiding that the Ospies are inspired by the Nazis, though this story is set in a 1920s-flavored world, so it’s not a perfect comparison. They check all the bad guy boxes: violent, homophobic, demanding unity at the cost of individuality, and oppressively opposed to anything that a reasonable person considers fun.

Cyril sets out on a mission to find evidence that might head this off at the pass. It’s his first mission back in the field after a near-death experience, though, and it does. Not. Go. Well.

As I said, the writing here is amazing. Donnelly is skilled with dialect: each region’s slang feels genuine and her characters are easily understood even when using bizarre cover terms. The twists and turns are also satisfyingly dense. It’s an excellent spy thriller.

What threw me entirely out of this story is – well, do you remember reading A Game of Thrones back in the day before we knew the glorious pain that is A Song of Ice and Fire? “Man, what a pickle, how are they going to get out of… oh…” This is the same thing. The good guys hurt each other for ridiculous reasons, the bad guys are almost always a step ahead, and all that is good and light in Amberlough is ground inexorably beneath the heel of a fascist regime.

This is a rather timely book, given what’s happening in America. I would even go so far as to suggest it’s an important book. It will make you think about people, about the ties that connect them and what might break those ties. You’ll also look differently at some political trends, too (I hope).

The tl;dr here: If you’re the kind of person that sees tags like “major injury to a main character” or “no happy endings here people” and doesn’t immediately close the tab with a funny cramp in your stomach, go right now and buy this book. You’ll love it.

My own misery aside, a few days ago Donnelly announced there are two sequels planned. Two! I’m not sure if I personally have the fortitude to tackle a sequel without knowing if I’ll have to spend another afternoon parked in front of Yuri On Ice with some cocoa. The writing, though… the writing was so good I just might risk it.

Have you read Amberlough? Do you need an emergency delivery of blankets and pork dumplings? Share your opinion in the comments section below!