I was waiting for the Halloween episode of “American Horror Story: Coven” and it didn’t disappoint in the scare-factor. As far as the story is concerned, it was one big flashback episode. Now, don’t get me wrong, the episode still had a lot of amazing moments. Last week we saw Fiona killing Madison because she thought the young witch was the next Supreme. We also saw Queenie asking the Minotaur to love her (I still can’t get over that), and learned what Kyle has been going through all his life. This episode answered some questions and showed the inner workings of the witch world…P.S. Witches are just crazy! 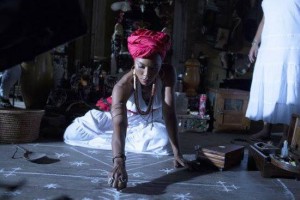 One of the best things I like about this season is the focus on race discrimination that the people of New Orleans had to face in the 1960’s. We see a group of white men hang the son of a hairdresser who works at Laveau’s hair parlor. This angers the Voodoo Queen and she brings forth a horde of zombies to kill the men responsible. It’s quite a scary scene. I’m a huge fan of zombies and the ones in the episode didn’t disappoint. The zombies tore the men apart and they didn’t even die when one of them was shot in the head. This scene told us one thing: Don’t

mess with Laveau, because she has an undead army at her disposal!

Another flashback from 1971 told what happened after Fiona murdered Anna-Lee, the Supreme of that time. I know there’s been some debate in the fandom regarding who cut off Spalding’s tongue. The episode answered the question, and it was a little creepy. Spalding cut off his tongue himself because he didn’t want to be forced to speak the truth about his love, Fiona, being a murderer. Spalding loves Fiona! Who would’ve guessed?

Coming back to the present; Fiona rescues Queenie, who has been badly injured, and the Supreme isn’t happy to learn that her daughter went to Laveau for help. Nan summons members from ‘The Council of Witchcraft’ because she thinks Madison is dead. One of the members has been after Fiona for years and now she has the opportunity to expose her as the murderer she was. Life of a Supreme is tough!

The major ‘revelations’ in the episode were: Cordeila told everyone that Madison couldn’t be the Supreme (much to Fiona’s shock) because she had a heart murmur, and Supremes are supposed to be in perfect health. Cordelia’s husband turned out to be some sort of serial killer, which I wasn’t expecting. Spalding likes to have little tea parties with dolls and stuffed animals, and he has made Madison’s dead body a part of his group! 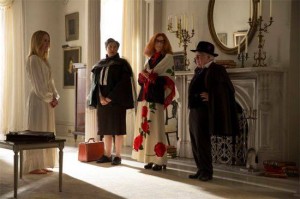 I guess it was obvious that Madison wasn’t the Supreme. What I wasn’t expecting was how Cordelia’s husband hooked up with some chick he met on the internet and then shot her in the head. I guess it was my fault to think at least one character in the season was ‘normal’. However, I was half hoping Cordelia to find out and get her revenge, the ‘witchy’ way.

As far as who the new Supreme is, truth be told, it’s still in the air. Though Zoe Benson seems to be the ‘lead’ when it comes to the young witches, the way her character has developed doesn’t make it likely that she’ll end up being the next Supreme. We still have more than half a season, though, so who knows, things might change? She still comes across as weak, trying to kill Kyle with rat poison.  Yes, as if that can kill someone who is already dead!

I have one complaint regarding the episode. After Fiona tells Cordelia she took care of what hurt Queenie we see Laveau receive the head of her Minotaur lover and she’s out for blood. I would’ve loved to see Fiona in action and actually see her killing the monster.

At the end of the episode we see the Voodoo Queen perform the same ritual to call out the dead, and she sends them all to the Little Witch School, with Zoe, Nan, LaLaurie, Queenie and the hot nextdoor neighbor inside. I’m looking forward to the zombie scenes next episode.

Fiona tries to make Cordelia tell her who the next Supreme is but she doesn’t answer. Cordelia goes into the bathroom and someone throws acid at her face… So not cool!

This episode gave us some good plot points through flashbacks and some amazing revelations as well. It really seems that the witches and voodoo practitioners are at war and I can’t wait to see Fiona make her move.  Game on, witches!