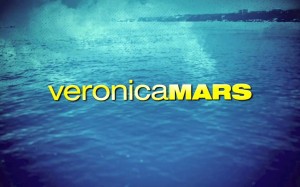 We finally got another look at the much anticipated – and famously fan-funded – Veronica Mars Movie and this time it’s got a bit of a controversial twist. Well I guess it’s not all that controversial unless you’re a fan, but pushing a love triangle is always a risky move where fandom is concerned.

WARNING spoilers beyond this point, don’t say I didn’t warn you.

For those of you that don’t know, or those that just want a little refresher, at the heart of Veronica Mars was the turbulent romance between the titular character Veronica and badboy/fandom woobie Logan Echolls. They were epic you know? But much to the disappointment of many fans (and the excitement of others) 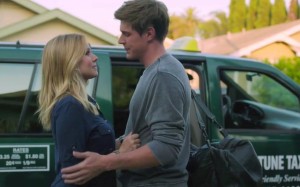 Veronica was dating the incredibly sweet Stosh “Piz” Piznarski at the time of series cancellation. And that was the end of that…

Until a seriously dedicated creative team and a bunch of incredibly passionate fans breathed life into Veronica Mars once more (still not over how amazing this is). The Veronica Mars fandom lurched to life with the Kickstarter campaign but it was with the release of the latest featurette that it actually felt like the old days.

The vid asked the question that, was never really on the tip of anyone’s tongue: Are you Team Logan or Team Piz? (Personally, I’m with Jason Dohring – Logan/Piz all the way.) Needless to say, fans were out in full force to voice their opinions and I suddenly remembered what it was like to be a fan while the series was airing. The shippers were out supporting their OTP in response to this clip – I even saw one person that was still hoping for Veronica/Duncan, oh dear.

To be perfectly honest, it doesn’t really matter. Veronica Mars is so much more than a love triangle and I’m pretty sure everyone is aware of that. BUT, this movie also relies on nostalgia and even ship wars can be fun when we look back them through rose colored glasses (although Chris Lowell might disagree – poor guy). Whether you like it or not shipping – especially LoVe – was a huge part of Veronica Mars fandom so they may as well embrace it.

That said the romantic focus in the clip was pretty much surface level. 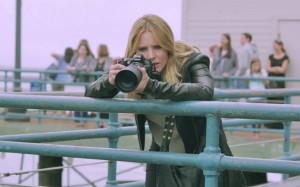 The footage shown looked fantastic (albeit a little rough) and the clip also revealed some pretty significant plot details. Kristen Bell tells us that: “In the beginning of the film, Veronica is living in New York, dating Stosh Piznarski. She’s run as far as she could away from Neptune. Within the first few minutes, she sees that old pal Logan Echolls has been charged with what? Murder.”

Don’t be scared off by the love triangle – there’s some really cool stuff throw in there, hidden under the guise of shipping fodder. Including a couple of glimpses of old faves.

Honestly I thought the clip was a bit of harmless nostalgic fun with some juicy tid-bits thrown in and it’s only made me more excited for this movie! Especially considering Rob Thomas told backers that: “the one bar that I felt like I had to hit was that VM fans must enjoy it. Coming out of the [test] screening, I felt like we had achieved that.”

Let’s face it marshmallows, it doesn’t really matter what you ship because we’re all Team Veronica! Anyway, this is a noir so the chances of anyone getting happy ending are pretty slim.

Previous:Review of Supernatural 9×04, “Slumber Party”
Next: “X-Men: Battle of the Atom” Review…The Future of the X-Men