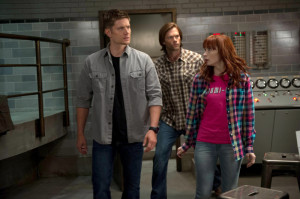 After all of the drama of last week’s episode, it was a relief to be treated to such an enjoyable story as “Slumber Party.” No major controversies or soul-crushing moments (sad, yes, but nothing that one couldn’t get off the floor from); just a fun adventure to get lost in for an hour, with an ending as awesome as the song that accompanied it.

After figuring out a way to possibly track the angels, Sam (Jared Padalecki) discovers a computer room in the bunker. While showing it to Dean (Jensen Ackles), the older Winchester accidentally (and unknowingly) knocks over a jar, releasing its contents. The Winchesters then call in Charlie (Felicia Day) to rig the ancient computer to track angels, only to later discover the newly released Dorothy (Tiio Horn)–yes, of The Wizard of Oz fame–and learn that the Wicked Witch of the West (Maya Massar) is now free as well. Thus begins the hunt for the witch before she get return to Oz and wreak havoc once more.

While the plot itself was well constructed (including a very nicely done reference to the relics Dean was looking at in “Goodbye, Stranger” from last season,) the thematic elements caught my attention the most. Season nine has been four for four thus far in presenting instances of possession and consent, this time with the Wicked Witch’s power to take control of victims (so if anyone was still wondering if this was going to be a seasonal trend, I would say this confirms it.) The issue of choice and consequences continues. Dean’s decisions have been the focus so far – his choices have had great impact on Sam and Castiel. In this episode it was Charlie’s turn to have Dean decide her fate, and now the lies Dean has told are starting to catch up with him. Both Charlie and Sam suspect that something is up, and when the truth comes out Dean’s going to have to face some undoubtedly unpleasant ramifications.

Contrast also featured prominently throughout the episode. We saw the difference between life in the Men of Letters bunker in 1935 and in the present, with even the dialogue style and cinematography distinguishing the two time periods. The distinction between the Hunters (the soldiers in the fight against the supernatural) and the Men of Letters (who could be dubbed the generals), was illustrated both through Dorothy’s interactions with the two men in 1935 and then even more clearly with Charlie. Finally, Sam’s perspective versus Dean’s perspective on the bunker were both enunciated by the pair, and also displayed via their choice of mattress (Sam’s being utilitarian as opposed to Dean’s comfort-emphasizing memory foam.) For Sam, the bunker is a place of work; for Dean, it’s home.

The major overarching theme in this episode, though, was “adventure.” The episode begins with the young Man of Letters excited about the prospect of adventure, only to told by his elder that it’s something to avoid, which unfortunately proves true for the young man. Charlie parallels this, being the youngest of the group and wishing that she could have a quest of her own. She gets her wish (albeit, to use her words, less “magical” and “more intense,”) with a good old fashioned monster hunt, complete with puzzles and fetch quests. Unlike the young Man of Letters, Charlie’s desire for adventure doesn’t end on a tragic note, but on a triumphant one, with AC/DC’s “For Those About to Rock” sending her and Dorothy on their way.

Supernatural isn’t known, of course, for its feel-good episodes. So when they come around, they are to be treasured. This one could not have been more timely. It was reminder of all that we love about this show, even including those moments of heartbreak and angst. Regardless of how one felt about last week episode, “Slumber Party” was more than worthy of being applauded. And for that, Supernatural cast and crew, I salute you.