The Good Place Previews Their Final Season at SDCC 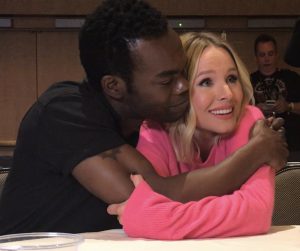 The Good Place is one of our favorite shows at The Geekiary. There is just something about that internal struggle of being a good person combined with workplace comedy and the right mix of great comedic acting that makes it so great. We aren’t the only ones getting emotional going into the final season, and the cast and creators shared their thoughts at San Diego Comic-Con about why the show has touched so many people so profoundly.

Even though The Good Place feels like the kind of show that could go on forever (I mean, it is literally about the afterlife), creator Michael Schur always had four seasons in mind for the series. It’s a bit surprising to think about considering all of the twists and turns and resets that the show has, but the writers committed to the eventual end storyline way back at the beginning of season two: all roads lead to season four. Kristen Bell gushed about how perfect of an ending the series finale has, and Schur teased that we will see many places we haven’t been before in the final season.

During the press room interviews, we learned a lot of information about how the show works behind the scenes, specifically regarding the philosophical and ethical themes that the show frequently brings up. The cast actually had to learn about ethics and philosophy to grasp not only their own characters, but the way in which they are portrayed. Bell and William Jackson Harper spoke at length about how the show helped them identify how they would answer all of those big questions. All of the main characters grow throughout the series and it’s that growth that demonstrates what the show is all about: meaningful relationships (as opposed to divine soul mates), what love is, and what it means to be a good person. Bell implied that viewers may not see everything on the first try, but looking back, it will all make sense.

It wasn’t all so serious and emotional in the press room; after all, how can it be when you have D’Arcy Carden, Manny Jacinto, and Ted Danson around? There are some great moments from the press room roundtables where Marc Even Jackson talks about Jacinto constantly making everyone break character, and Jacinto talks about how he has a crazy connection to Jacksonville now. This was a great press room, and every single person involved in the show has a lot of passion for it. It will be tough to say goodbye.

You can find the entire playlist of The Good Place press room coverage below.

Even though four seasons was always part of the pitch, I can’t wait to see how the show will end. It is one of the most unpredictable shows that I have ever watched, so it is anyone’s guess how everything will shake out. One thing is for certain, however, I will miss Eleanor, Chidi, Tahani, Jason, Janet, Michael, and even Shawn and all the others.

The final season of The Good Place premieres on Wednesday, September 26 on NBC.

Previous:A Star-Studded Charity Soccer Game in Vancouver
Next: The Psychology of Fandom Hyperfixation