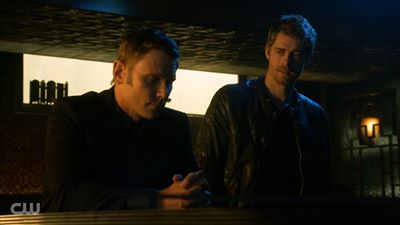 The fourth episode of The Tomorrow People seems to want to pull back from the plot lines set up in episode three, but luckily the distraction is so entertaining that you’ll barely notice. I was really looking forward to seeing the results of last week’s events, especially the new tension between Stephen and his friend Astrid now that she knows part of his big secret. But instead of that, the show takes a step back in time (not literally, sorry, still no time travelers) when a rogue Ultra operative from John’s past resurfaces. His name is Killian McCrane (played by Jason Dohring), a former friend and now murderer. After years of hiding, he makes his presence known once more with a string of catastrophic fires, burning down buildings and killing who knows how many, all headed in one direction: New York. Turns out, Killian is the rarest of paranormals. Thanks to Ultra’s testing, he can kill.

The present day action is interspersed with flashbacks of John’s youth, from his abusive foster home to his early training at Ultra. It’s an interesting look into his past and into Jedekiah’s as well. The unhappy childhood is perhaps not the most original, but it’s not unbelievable either, and it sets up the weirdly familial relationship between John and Jedekiah well. Back in episode one, I remember feeling like John was going to be revealed as Jedekiah’s son. I guess I wasn’t that far off. Despite trying to kill John on a number of occasions (and again in this episode) Jedekiah remains almost affectionate with him. Menacing and overbearing, but still affectionate. I hope the show uses their relationship again in the future and I definitely want to see more about John’s time with Ultra. His character can feel a little flat at times. He’s spent the last three episodes shying away from fights and pulling back so thoroughly that I started to wonder why he was there at all. In this episode he finally turned around and started doing something without being pushed. I liked it. And at the end, I’m not going to lie, he was pretty badass. It’s rare that we see Jedekiah looking nervous but it was well worth the wait.

With all these action sequences and flashbacks it would be easy to forget the other highlight of the episode: the “family dinner” with Jedekiah. Stephen’s mom, Marla, showed a little badass of her own this time around. It was nice to see her in protective mode taking Jedekiah to task for pulling Stephen into his work (though she’s still unaware of its real purpose) and for what it did to Stephen’s father in the past. I’m starting to wonder if Marla knows more than she lets on. It’s hard to believe she was married to a teleporting, telekinetic telepath for years without noticing anything but I guess we’ll have to wait and see.

So, as I said, the episode had a lot to love—character development, back story, action sequences, and teleporting aplenty—but I’m still itching to know the answers to all the questions from last week’s episode. What changes will come about now that Darcy is Stephen’s partner at Ultra? When is Stephen going to learn to teleport properly? And what’s going on with Astrid? I’m hoping for some of those answers to arrive next week.