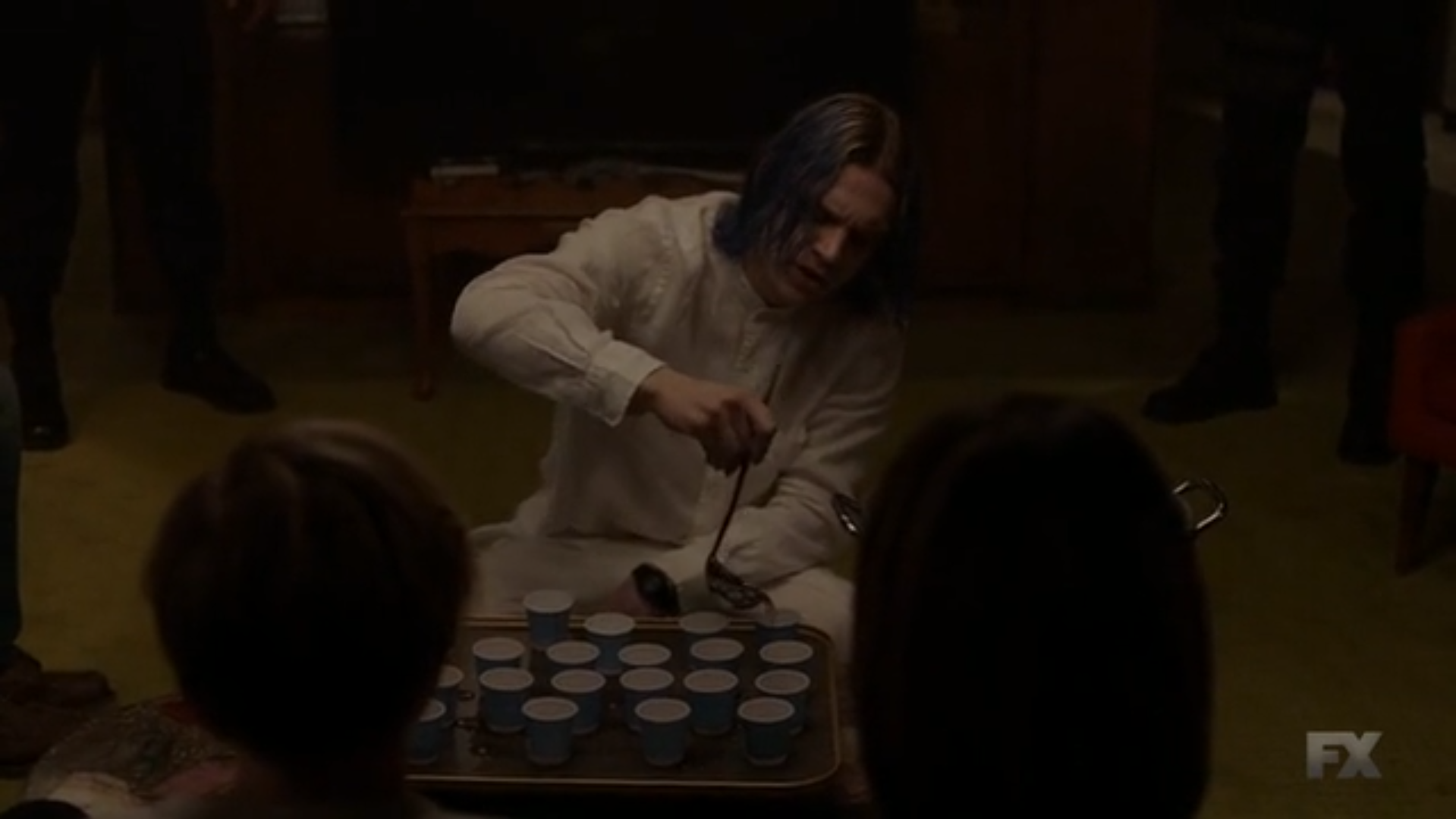 Alright everyone, drink up!

Marshall Applewhite. David Koresh. Jim Jones. Each of these cult leaders is lovingly remembered and described by Kai to his cult in the opening to “Drink the Kool-Aid”.

Kai especially idolizes Jim Jones, calling him the “Kanye of leaders”. This is most likely because Jim Jones had the most followers and also promised a utopia much like Kai does. Jim Jones also showed a dedication to his group by committing suicide with them. Kai then asks several of his members if they would die for him to which several answer with an enthusiastic yes. One even offers to castrate himself if that is what Kai wanted. These men definitely want to drink the kool-aid.

The most interesting part of this opening scene is how Evan Peters plays each of the other cult leaders as well. While this was most likely to establish with the viewer how Kai is like each of these cult leaders, it also shows why Kai’s character remains so believable. Kai is pieced together from these men, all of whom existed. At the end of this scene, Kai promises to show how he is going to expand his power and mission. 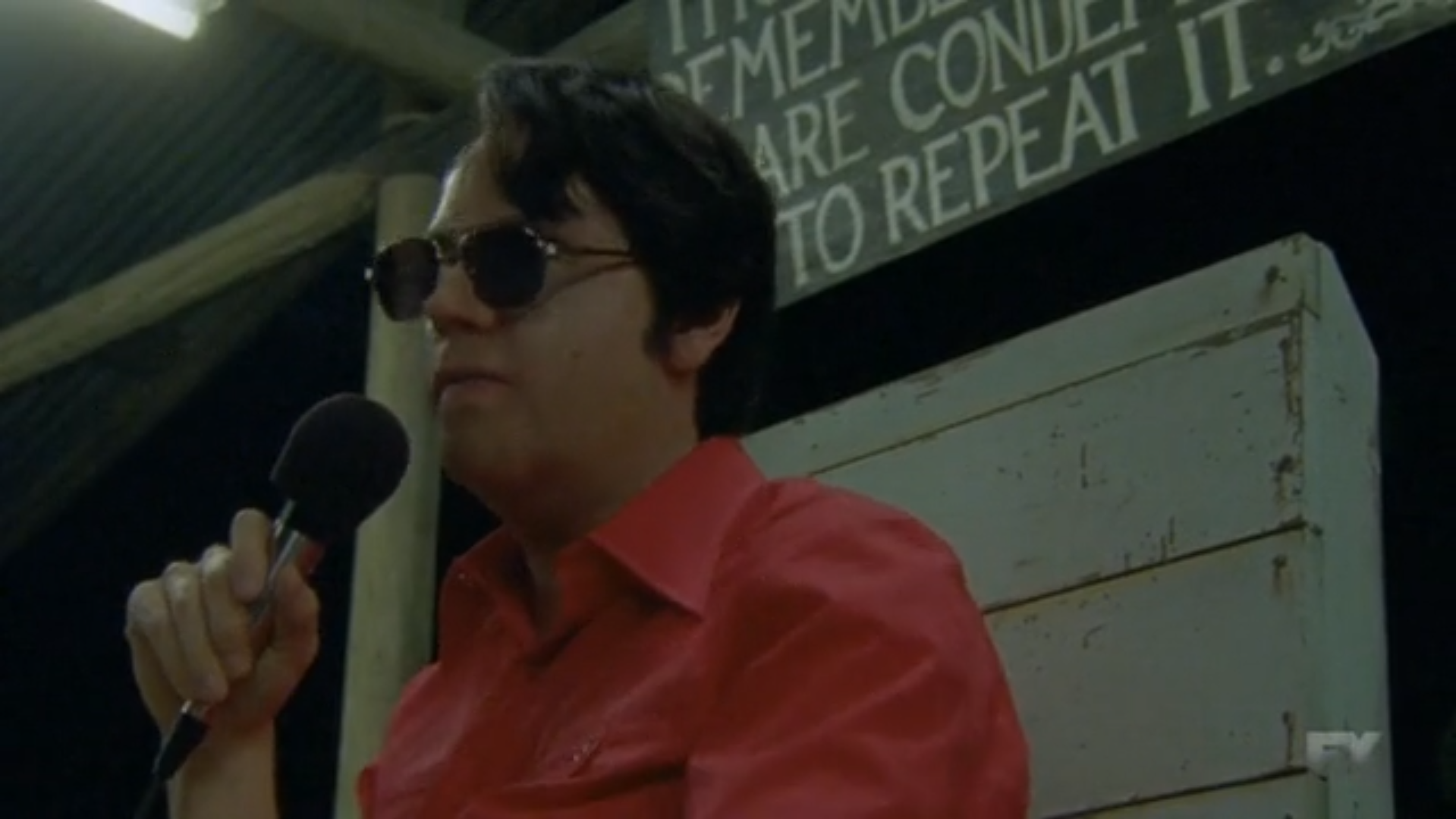 “We lost a generation of moms to Candy Crush”, Kai explains to the city council as well as his group of followers. He wants to pass a motion to block certain sites from people by routing the internet through a special city-specific firewall. This is reminiscent of China’s National Public Security Work Informational Project. Only one person challenge’s Kai’s motion, and it ends up passing. The ease of which it passes with only one dissenter makes it seem like all the other council people are either in Kai’s pocket, or Kai has them blackmailed.

Also, Kai will be running for Senate in 2018! However, since there are only two more episodes left for this season, it is doubtful a whole year will pass. It seems Kai will either be dead or in jail by the season finale. With the quality of twists this season, it is hard to expect a different ending.

Cut to Ally pleading with Ivy to tell her how she ended up in a cult. Last episode’s big reveal was how Ally was now part of the cult, something that was expected to happen from the beginning. Ally is finally able to see Oz again, and Ally lays into Ivy and Winter for everything they have done. Despite that, Ivy and Winter want out. They need to run and run fast before Kai finds out. Before they can plan anything, Kai’s neo-Nazis show up and take the women back to Kai’s place for an emergency meeting.

The viewers find out that Kai didn’t kill Beverly. She was just in the Hole. In Jim Jones fashion, Kai begins to serve Kool-Aid to everyone, saying how it is time for them to leave their physical bodies and come back more powerful than ever. This is a direct combination of Heaven’s Gate philosophy and Jim Jones’ method. The women are very much distressed. Time to “Drink the Kool-Aid” everyone!

From the very beginning, it is obvious that the Kool-Aid isn’t poisoned. Kai is too egotistical to commit suicide with his followers. His recent declaration to be running for Senate is another reason to support this idea. Even when Kai is showing how he is becoming ‘unraveled’, his character is too established to act out of character.

One of the neo-Nazis proclaims he doesn’t want to do this and is shot to death instead of poisoned. This only further supports the idea that the Kool-Aid isn’t poisoned. Those who would not drink with Jim Jones were forced to do so. If the Kool-Aid were truly poisoned, Kai would more than likely follow this idea as a show of power and control as opposed to having another follower shoot this fellow.

Now everyone drinks and surprise! It wasn’t poisoned. “Dead people can’t vote”, Kai proclaims as he laughs. Just a test. Nothing to see here.

This episode leads to Ally and Ivy deciding that now is the time to go. Kai could have easily killed them and that would leave Oz with no family. As they go to pick him up from school to run, they find that Oz has been picked up by his nanny and she wasn’t alone. As Ally and Ivy rush to get their son from the crazed cult leader, Kai is busy being homophobic as all hell.

Kai proclaims that a boy needs a father. Oz has to know who his dad is. Well, Kai is Oz’s father now! According to Kai, he was a frequent donor to the place that Ally and Ivy went to have Oz. After a brief stand-off, Ally and Ivy allow Oz to stay the night with his ‘father’. 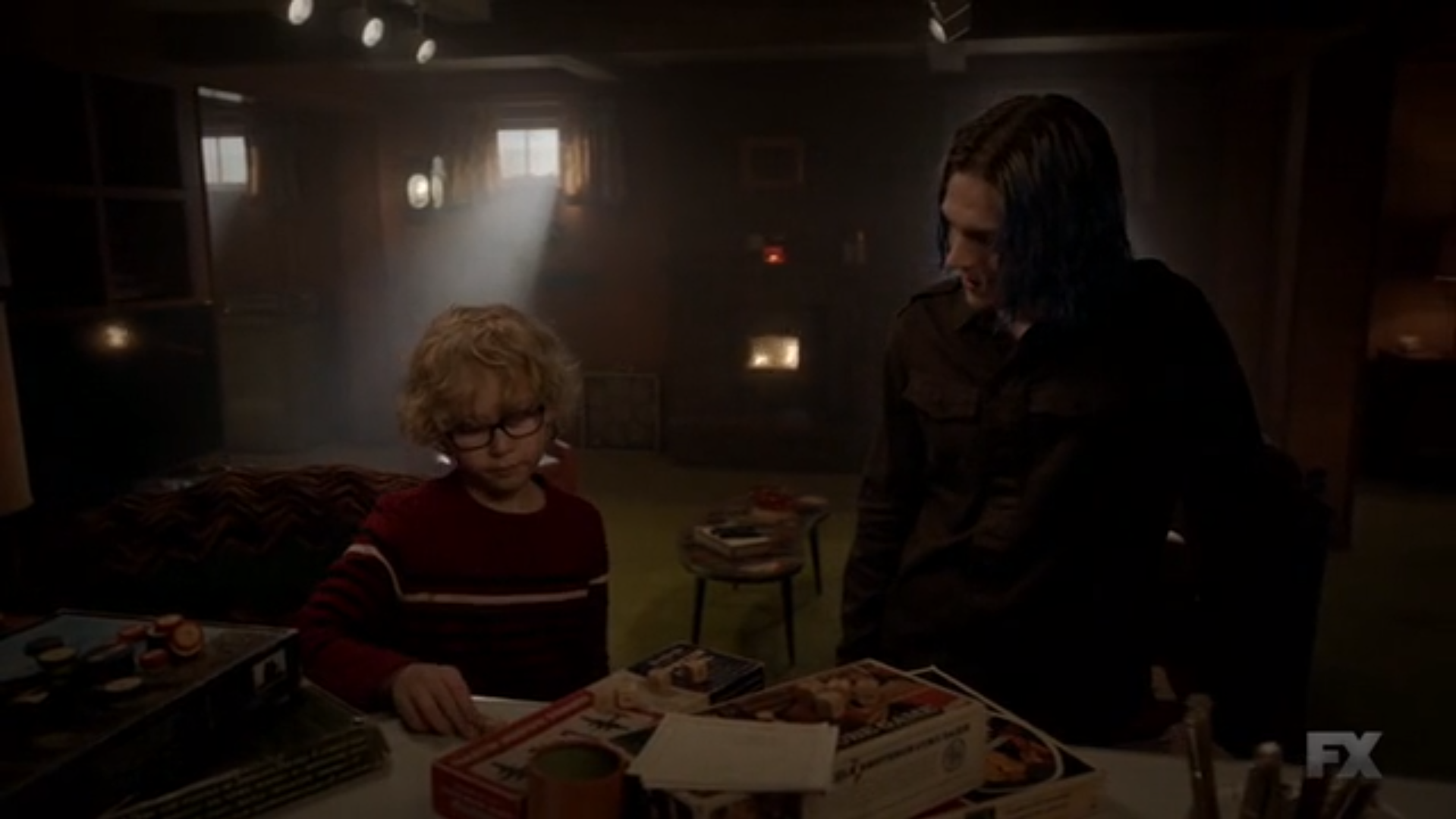 Seeming to take Kai’s advice, Ally cooks Ivy a nice dinner and seems to want to rekindle their relationship. Kai suggested they use the time without Oz to reconnect with each other, and Ally seems to have liked this idea. Ally begins to speak of her time in the psychiatric ward.

Ally is composed and well-spoken. None of her lines seem to be ripped from a trope and she is in control of herself and what she wants in life (to a point). This character seems real as opposed to the Ally from earlier episodes. Finally, Ally is likable! Sarah Paulson’s acting for this scene is well-done, showing that it was not her acting that was lacking from earlier episodes, but absolutely atrocious writing leading to Ally’s character being horrible.

Revenge is what Ally strived towards in order to get out of the psychiatric ward. Ivy put Ally through literal Hell and committed the ultimate sin in taking Oz from her. What started as a romantic dinner turns into the ultimate revenge despite Ivy proclaiming that Ally is a coward who won’t do anything. Jokes on you, Ivy! The pasta AND the wine both had arsenic in them.

While Ally’s reasonings for murdering Ivy are understandable to a level, it dips its toe into the aptly named Dead Lesbian Syndrome trope. While Harrison, Detective Jack Samuels, and to some extent even Kai get to have gay sex on the screen, none of the queer women did. Not to mention, Harrison and Jack both died not at the hands of their lovers, but due to other circumstances. It seems when it comes to certain tropes, Ryan Murphy just can’t stay away.

The next scene shows Kai going on again about Jim Jones. “Drink the Kool-Aid” is not just literal. Oz brings up information about how Jim Jones and his followers really died and what truly happened at Jonestown. By doing this, he effectively shuts Kai down and calls him a liar. Kai proclaims fake news and how he is the only one spouting truth. Oz isn’t having it. In a fit of rage for being questioned, Kai demolishes Oz’s phone and puts him in ‘time out’ which is more than likely the Hole. 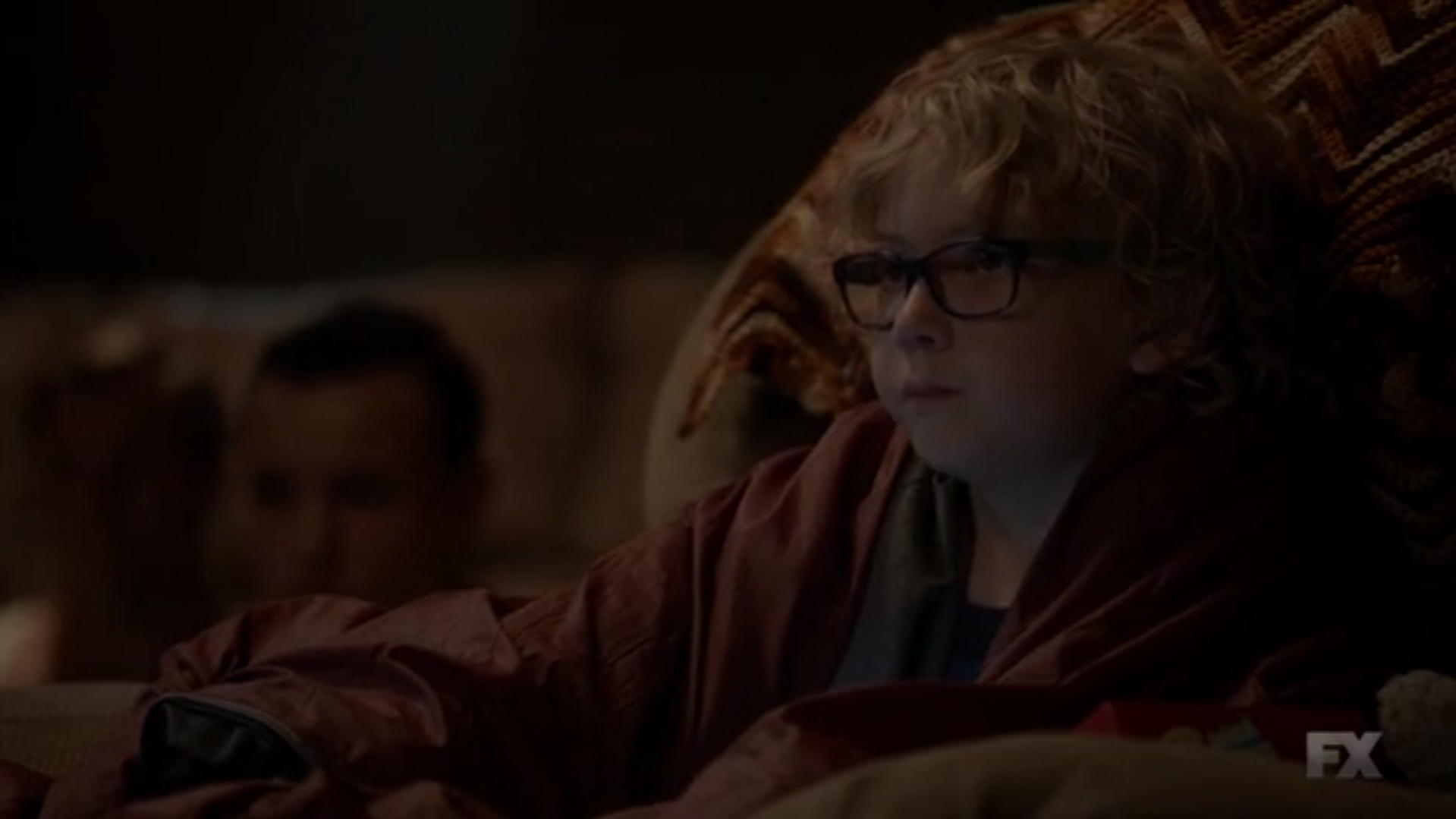 Oz is having none of your revisionist bullshit.

Now that Ivy is out of the way, Ally goes to pick up Oz only to find that the “Divine Ruler” is not home. Kai’s names are slowly climbing in power and meaning. Starting from Leader, Councilmen, Senator, and now Divine Ruler. Ally tells the lackey at the door to have Kai meet her at her place for dinner. In the meantime, she bribes the lady at the front desk of the fertility clinic to show her Oz’s father which is not Kai. She asks the lady for a favor before the episode moves to dinner number two.

Once again Ally is making Kai Manwich sandwiches. Kai asks where Ivy is, and Ally tells him the truth. Kai continues chomping down, not fearing that Ally will kill him since he still has Oz. Ally slides Kai a folder as he eats, telling him that he was right and that Oz is his son! Congrats, Oz is the messiah baby. This was most likely done in order to protect Oz from Kai since there is no way Kai would harm his son. Ryan Murphy would also more than likely not murder a child.

Ally is clearly manipulating Kai in order to protect her son and do her best to slowly try and leave the cult. However, the show has the two clearly mentally ill characters now as manipulative murderers who will do anything to get their way. The episode ends with Kai hugging Oz and Ally and telling them what a happy and wonderful family they will be.

“Drink the Kool-Aid” proves that the previous episode, “Winter of Our Discontent”, was almost entirely unnecessary. Everything that episode set out to accomplish was done well in this episode without including out of character and strange parts. This season of American Horror Story could have easily been 10 episodes instead of 11 and there would be nothing missing.

With only two episodes left, it looks like Ally is going to be removing Kai from the picture sometime soon. Since this season tends to play its cards too early, there would be little surprise if Ally takes over the cult once she removes Kai at the helm. This season doesn’t pull its punches, even when it really should.