Angels of Death 1×14 Review: Swear you will be killed by me 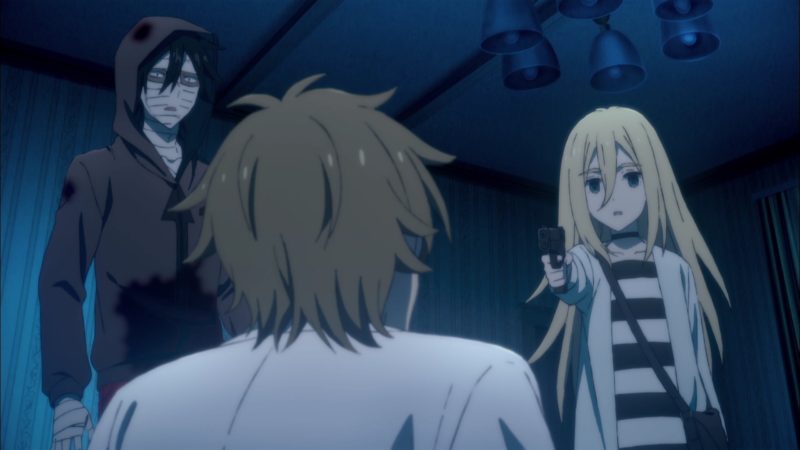 The last episode of Angels of Death ended with a bang, quite literally. Was Rachel actually going to shoot Zack? What about the promise they made to each other? Was it true that Rachel only cared about herself after all? “Swear you will be killed by me” ends up feeling a lot more like earlier episodes, getting back to Zack and Rachel’s camaraderie.

I imagine most people were not surprised that Rachel ends up shooting Danny and not Zack at the beginning of “Swear you will be killed by me.” In some ways the anime is a bit more predictable than the computer game in this way. The assurance that both Zack and Rachel would be okay in any given moment is quite a bit more precarious in the game. Rachel claims that the reason she shot Danny is because she wants to be the one to kill Zack. She tells Zack that she wants to make him her own. (Much like she did with that puppy and her parents in the flashbacks in the last episode).

Zack easily switches things up on Rachel. He’s not so easy to kill, after all. Zack finally gets through to Rachel by explaining that although her God may be dead, Zack is not. And he is there. He will still kill her. Rachel worries about being unclean, to which Zack responds, “Who the hell do you think you’re talking to?! I’m a murderer! I’ve killed tons of people because I like killing people!” I mean, really, did Rachel forget? Zack isn’t actually the pure angel Father Gray always tries to make him out to be. Zack is not a good person. He can hardly claim to be better than Rachel. As I’ve said in previous episode reviews, the only difference between Rachel and Zack is that Zack kills just because he likes killing. Rachel always has a self-serving reason for doing so.

This conversation between Zack and Rachel is so important, because they come to the understanding that they are 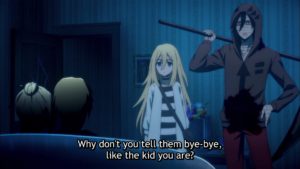 just people. They’ve made a promise to each other and no one else. It is their decision to keep this promise in their own hearts. There’s no higher force involved in their decision. Zack makes Rachel swear that she will be killed by Zack alone, swearing to Zack only. Despite Zack’s harsh language and ways, he manages to get through to Rachel and help her out of the tailspin she had been going through. After this conversation, Rachel is a lot more like she was at the beginning of the series, the only difference being that she has all her memories now.

Now that Rachel and Zack are back on the same page, they can once again concentrate on escaping the building. Rachel does take a brief moment to say goodbye. This floor is a representation of her childhood home after all. She runs into Father Gray, who gives her a hint on how to escape after she answers a number of his questions. To Father Gray this is all some kind of sick experiment for his own entertainment. He likes watching how the people in the building react to the situation they’ve been placed in and seeks to understand their motivations.

When Rachel rejoins Zack, they find out that once again Danny has not died and has escaped. (Does anyone else feel like Danny is more of a “monster” than Zack is? He just won’t die!) Rachel acknowledges the representation of her parents on the couch. Zack suggests that she says “bye-bye” to them like the kid she is; so she does. I found the scene to be kind of heart-breaking. All Rachel ever really wanted was a family that she could love.

“Swear you will be killed by me” ends with Zack and Rachel exiting Father Gray’s floor through one of the stained glass windows. What lies before them is a long staircase. To make matters worse, an emergency self-destruct sequence has started in the building. Will Zack and Rachel be able to make it out of the building without issue? We still have two episodes left to find out!