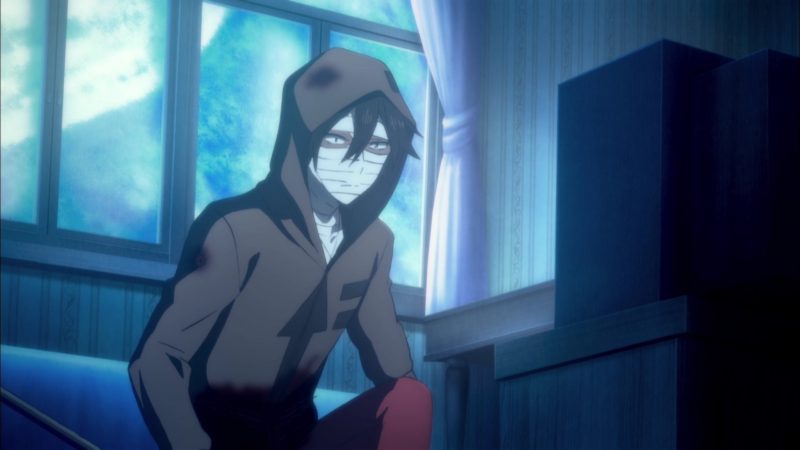 After a one week hiatus, Angels of Death episode 13, “I’m not Your God”, started off right where episode 12 ended. Zack is watching a video that reveals some very surprising things about Rachel. Zack is disturbed, but Danny thinks it’s hilarious.

If you haven’t watched “I’m not Your God” yet, I would caution reading forward as the spoilers for this episode are a pretty huge reveal for the series. I would also like to warn for the following triggers: spousal and child abuse and murder of an animal.

After a news story about the death of Rachel’s parents, the video Zack is watching switches to Doctor Danny having a therapy session with Rachel. Danny speaks to her about his past of being born without one of his eyes and how it ultimately led to his mother’s suicide. I believe he did this to get Rachel to open up about why she killed a puppy and sewed it back together and why she killed her father and sewed her dead parents together.

The episode gives huge insight into Rachel’s character and fully reveals all of the small strange things that she had said or done previously in the series. Both of her parents are abusive to her and to each other. Rachel doesn’t seem to really understand too much. She’s more concerned about trying to ask her parents if she could have a puppy while they were in the middle of a verbal and physical fight. It becomes apparent fairly quickly that at least her mother suffers from mental illness, if not her father as well, considering his addiction to alcohol. Rachel’s own issues definitely seem to stem from both nature and nurture. 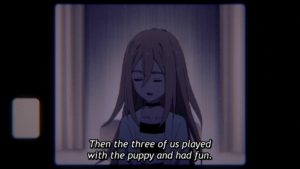 Ultimately, Rachel witnesses her father murdering her mother with a knife. He then comes after Rachel and threatens to kill her as well. Rachel does end up killing her father in self-defense. After that occurred, she then proceeded to create her strange family consisting of her dead parents and the dead puppy. Zack had seen enough of the video and put his scythe through the TV. Zack returns to Rachel and tries to get her to tell him the truth since he hates being lied to more than anything.

I felt like this episode did a better job than the computer game did of telling Rachel’s story. It felt more comprehensive without the gameplay. So the huge reveal was more interesting. I kind of almost wish I had watched this episode before finishing the game. It would have made more sense to me. By this point Rachel has all her memories back and its clear why this floor of the building is hers. Zack kept questioning her, “Do you kill all of the people who come to this floor?” She wouldn’t answer him.

I also now understand why Father Gray had more than once described Zack as the most pure and innocent of all his angels. I had always thought that, that was a strange statement to make because Zack’s is a serial killer after all. But, now it makes more sense to me. Compared to every other person in the building, Zack is the only one who kills without any kind of ulterior or selfish reason. Every other character kills because there’s something they want or it serves them in some way.

“I’m not Your God” ends with Danny and Rachel pointing guns at Zack. Rachel takes a shot, but the episode ends before we can see what happened. Did Rachel shoot Zack? I’m sure we’ll find out in the next episode. There’s only a few episodes left and I’m excited to see the rest of the story unfold!