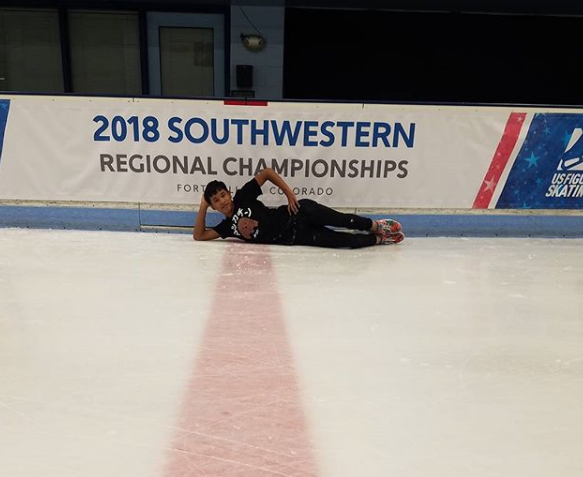 Figure skating and geekery has crossed paths a lot over the years.  Just check out the amazingly geeky skating programs that showed up at the Olympics just last year.  One such skater who blends fandom and skating is the up and coming Austin Borjas-Ewell from San Antonio.

Austin has been skating since the age of 10. He’s already made headlines as the first male skater from San Antonio to qualify for sectionals.   Aside from his fantastic skating, Austin has been catching the attention of the skating community’s geek contingent due to his frequent nods to fandom on his Instagram.  Like two-time world champion Evgenia Medvedeva he’s an anime fan, and the geek community has taken notice.

We got to chat with Austin about all things geeky, his skating career, and what lies ahead this season.

Figure skaters and geeky fandoms seem to cross paths frequently. Evgenia Medvedeva has her famous Sailor Moon exhibition skate. Boyang Jin has skated to both Star Wars music and Spider-Man. So I have to ask, have you ever done a program to anything from any of your fandoms? If not, would you ever consider it?

I think the first thing I ever did to fandom music was the duet piece from Yuri!!! on Ice that is on my Instagram. I also posted a video to the Ice Adolescence trailer music. I tried to convince my coach Cindi [Ezzo] to let me skate to “Stammi Vicino”, but that didn’t end well. She said no.
Outside of social media, I’ve skated around to a lot of anime songs just to see what I could do with them, because improv is fun. Like, for the internet though I could do [Free! ending theme] Future Fish, but I would just be shirtless running around on the ice doing penguin slides and free strokes on solid ice. Doing that kind of thing.

When I get to that point in my future when I have a career that’s set, I could skate to something from one of my anime. I feel like the obvious one would be “Yuri on Ice” from Yuri!!! on Ice, but a lot of people have done it and it gained more traction when the Japanese pair team skated to it. That would be the safest bet, but in reality I don’t know. I can’t think of anything else I could do in competition at the moment, especially because so many of the openings are rock, and I don’t know how old judges would appreciate that!

There’s an upcoming event about cosplay on ice. Can you tell us a bit about that?

This is going to be my first year going to Anime on Ice. It’s pretty much a small convention, where obviously ice skating is involved. But there are also vendors, panels, a maid cafe, and live performances, voice actors, games, stuff like that going on. It goes from 5:30 to midnight on October 20th. They do introductory skating lessons, cosplay contests, and just a bunch of fun stuff for weebs that want to skate.

I’m going to be a special ice skating guest. We’re following the theme of Yuri!!! on Ice, and I’ll probably be Phichit and skate the full skate program of Shall We Skate. I’ve actually never performed an anime number full out to any audience in my life, so we’ll see how that goes! It’s exciting to be able to perform for an audience, especially an audience that appreciates skating. I wish I would have planned it out better though. One of the things I wanted to do was have the introduction of my program be All Might being “It’s okay now. Because I am here!” But instead of being All Might’s deep voice for the final part, it’s like young Deku’s little voice “I am here!” and then I go running out on the ice in the All Might hoodie.

What’s your biggest fandom at the moment?

Oh my gosh. I don’t know. I’ve been keeping up with Free! for a really long time, but I’m starting to get really invested in Boko No Hero, which is kind of scary because I still need to catch up and there’s so much that I have to process. But if I had to say, that would be it because it’s what I’m watching at the moment, so I’m so invested in it and have been binging it non-stop.

I’ve heard you’ve recently gotten into Boku no Hero Academia and have discussed a lot of theories (love your video of you in the All Might hoodie, by the way!). So I’ve got to ask: what are your theories? Who is the traitor? Is Dabi a Todoroki? Tell us your thoughts!

I really don’t know who the traitor is! That whole scene where they put that out there was so vague. I know Emily thinks it’s the detective [Naomasa Tsukauchi] and my other friends think it’s a student, and some think it’s Present Mic. I think they’re all too good to be the traitor, but Emily’s was the most convincing because she had so much conviction and now I’ve been explaining that theory to my friends. And Dabi is definitely a Todoroki.

Who’s your favorite character from My Hero Academia so far?

That’s like picking your favorite child! But I mean if we’re to talk in the standards of best hero, the purest of them all is Midoriya. He’s got that innocence, and that’s why he becomes the number one hero. The best meme in the bandwagon of 1-A students is Kaminari, though. But I was about to say Bakugou because he like screams a lot! 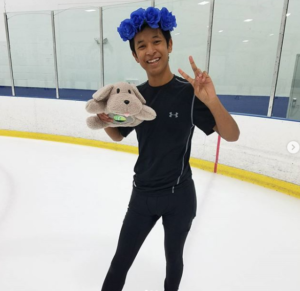 Speaking of anime, when Yuri!!! on Ice premiered, did you notice more interest in figure skating?

That’s a definite yes. I feel like especially since I teach learn to skate, which is pretty much people of all ages who want to come and learn to skate, I know the majority of the teenagers who came in around 2017-18 were all fans of Yuri!!! on Ice. I think the majority of my teen beginners class in December 2017 were fans of Yuri!!! on Ice. A lot more people here at the rink are openly fans of anime now, too. It’s really scary to think about actually–the otaku are taking over!

Again, that’s like picking your favorite child! I like Phichit because that’s like my twin, and also he’s a good meme. I know at San Japan I made it canon in my head that he’s always on his phone looking for the bookmarks of the memes he’s seen. But my favorite main character out of the three of them is probably Yuuri.

From a skater’s perspective I loved Yuuri’s free skate at the Grand Prix final, the culmination of all of the work he put in to get such a good placement and do so well at such a crucial time. I relate to that a lot. But regular fanservice-wise for scenes, it’s a tie between the engagement scene where they exchange rings in the cathedral, or any scene that involves chibi animation. That’s always funny to me. Like when they’re explaining the skating, or when things happen that freak everyone out suddenly.

What would you say your top five shows are right now?

Haikyuu, because it was the first non-skating related anime I saw, which I enjoyed. Then I got into Free!, which is great for the fanservice. Boko No Hero obviously, it’s the first non-sports anime that I really got into. I procrastinated on watching it since about the time Yuri!!! on Ice came out. So, shame button for me but I caught up, almost. Yuri!!! on Ice, because it is a really good look at figure skating. And Steven Universe of course. I sing a lot of the songs from Steven Universe just for fun.

I can tell by your Instagram stories that you’re a big Steven Universe fan.

I am, but I’m even more behind in Steven Universe than I am in Boko No Hero, and I feel like i’m going to get virtually slapped for not keeping up, because I LOVE Steven Universe. Steven I think has the right mindset for a hero. Like, to compare to My Hero, he just wants to do good like Midoriya. He just wants to make friends and keep everyone positive, even though he has his own battles going. I think that’s relatable to anyone who is just going through so many things, but having to stay strong and keep going for everyone else. Also he’s just like a dork, like me, and gets himself into stupid situations that are fun to make fun of later on.

What are you most excited for this season in skating?

I’m excited to see what Yuzuru Hanyu can do, that’s what I’m really looking forward to. Like he’s skating to two programs from two of his idols. I think there was a Canadian skater who was going to retire, and now his free skate is to like Final Fantasy or something like that. That’s where I want to go to, where I can skate what I want to do. Besides that, I’m just excited to see what all the newcomers are going to do, like one of my friends got his first Junior Grand Prix assignment and I’m excited for him. He’s skating to BTS or EXO and I’m waiting to see how the fans react to that.

You’re currently raising funds on your way to Nationals. What’s your next event on your journey?

Southwestern Regionals is next, and it’s coming up really fast which is scary to think about. It’s only my second time competing this season which is strange for me, but it be that way sometimes. I think we’re going into a week out now, so it will be exciting to see how it goes.  I think you need the Gold pass with NBC to watch those events live, but it’s honestly worth it in my opinion because you get to watch all of the major skating events as well as all the qualifying events for all of the juvenile through senior events.

How can people help you get there? How long will your fundraiser last?

There are a lot of ways to help. Obviously there’s donating because it doesn’t just go for the competitions or one event, it goes throughout the whole season. Any donation that anyone makes can go towards my new skates, or coaches, or ice time–little things that in the long run make a huge different. I think a lot of people when they see these kinds of fundraisers, they don’t know what they’re actually doing to help us with. Getting to Nationals isn’t just doing the competitions, it’s all the little things that come up in between that make a huge difference in getting us there. I don’t have corporate sponsors, so anything people give really makes a big difference in my being able to skate competitively.

Thank you for chatting with us, Austin.

For fans that want to help him get to Nationals, check out his fundraiser here.  The Geekiary is rooting for you!