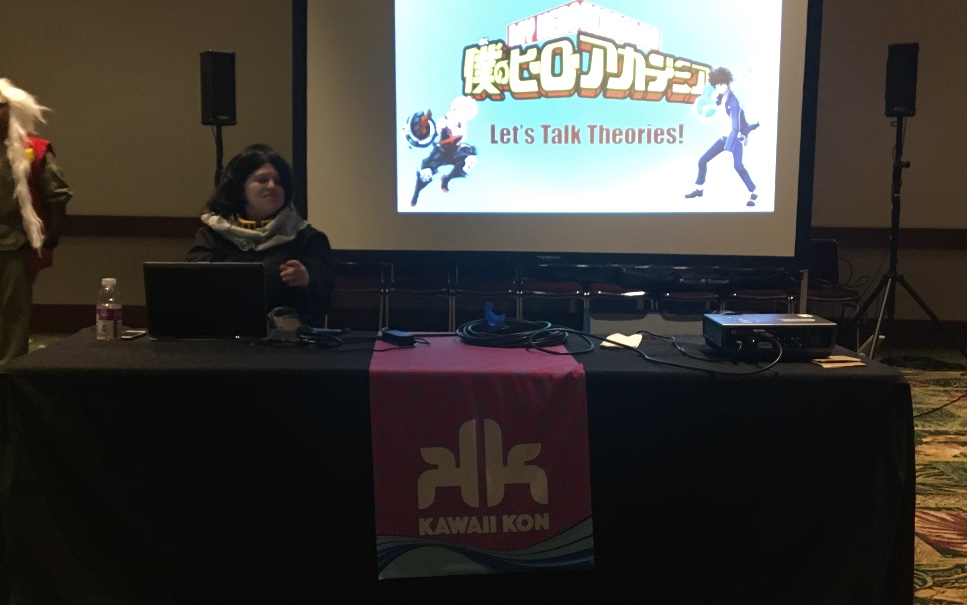 One of my highlights of Kawaii Kon 2019 was being able to present my Boku no Hero Academia: Let’s Talk Theories! panel at the con.

For those of you who follow me on social media, you know Boku no Hero Academia has been a fairly recent (but extremely intense) obsession of mine (check out my ‘Which Boku no Hero Academia Teacher Are You?’ Quiz).  As is the case with most of my obsessions, I got sucked down the theories rabbit hole super quickly.  I spent so much time going far deep into the weeds with these theories that I decided to turn it into a panel.  And bonus fun fact: I cosplayed as Aizawa during this panel, marking my first cosplay in over 15 years.  Now you know I’m in deep.  This just isn’t a thing I do, but here I am.

Fair warning, but this has My Hero Academia SPOILERS for both the anime and the manga up through March of 2019.  But you don’t have to be a manga reader to enjoy it.  Several of my audience members were anime-only folk and they were part of the lively discussion.  Topics covered include the ‘Dabi is a Todoroki‘ theory, numerous traitor theories, the ‘Midoriya is related to AFO‘ theory, and the new and exciting time-traveling Bakugo and Kirishima theory.  We covered a lot of ground and the audience was delightful.  I’ve never had such a responsive audience before.  It’s even more impressive when over half the crowd was standing in the back and must have been tired near the end of that hour.  But thank you, guys, it was a lot of fun!

The new season of My Hero Academia comes out in October 2019.  Though we haven’t been reviewing this series so far, we’re all in for the upcoming season.  Follow us on Twitter and Facebook for all of our recent articles, including BNHA season four.

Previous:‘Revengers Buttgame’ Is Exactly What You Need To Relax Before Endgame (Seriously)
Next: Carina Adly Mackenzie Defending Poor Queer Representation In “Roswell, New Mexico” Is Hilarious!