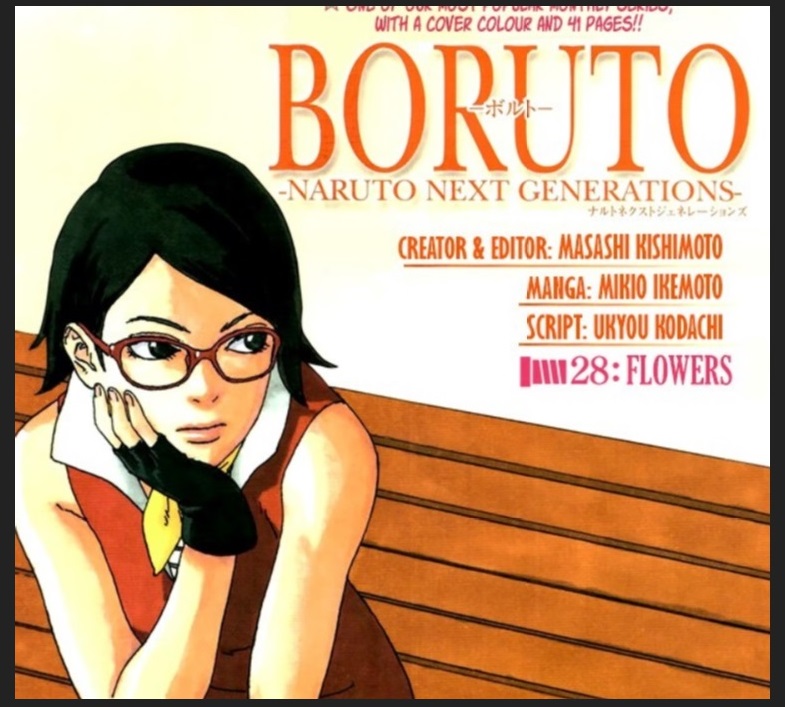 Finally, the Boruto manga series gave me an enjoyable installment with issue 28, titled ‘Flowers,’ which led me to review it. Here’s to hoping the next issue is just as enjoyable if not more.

This review of Boruto manga chapter 28 ‘Flowers’ mentions PTSD. You have been warned.

The previous Boruto manga chapter I reviewed for this website was issue 24. The ones following that installment seemed to drag story-wise. However, in ‘Flowers,’ we saw the plot move forward and I wanted to write about it.

After Naruto made the decision to allow Kawaki to stay in his home (with Boruto, Hinata, and Himawari), it was obvious Kawaki and Boruto were going to be at odds with each other. ‘Flowers’ opened with Naruto taking Kawaki for a walk to find something that might help the young ninjas to become friends.

I liked how Salad decided to tag along as well. I have missed seeing her in the previous chapters. What I don’t miss is her inappropriate outfit considering she is a very young girl. I still don’t understand why someone hasn’t told mangaka Mikio Ikemoto to change her clothes. Her previous outfit was functional. Her current getup reeks of fanservice. Also, where is Mitsuki?

Anyway, ‘Flowers’ also addressed Kawaki’s PTSD. Being a manga series primarily aimed at kids, I don’t know how deep Ikemoto and Kodachi will dive into such a serious topic, but I’m glad to see Kawaki being shown as a young character who has had an extremely troubled past.

I also liked how Salad told Kawaki he shouldn’t excuse his bad behavior by blaming his upbringing. Again, I don’t know how and if such an issue will be addressed as the series continues. However, I hope the creators decide to show us Kawaki dealing with his PTSD in an informed manner.

The last few panels of ‘Flowers’ showed Jigen and Delta contemplating if they should enter the Hidden Leaf Village. Turns out Ino’s Yamanaka Clan has been keeping an eye on chakras entering the village. Anyone who isn’t from the Hidden Leaf triggers an alert when they enter the premises. So, while Delta couldn’t enter, Jigen went ahead.

Jigen being able to enter the village without sounding off the alarm does raise many questions. Is he someone who was born in the Hidden Leaf Village? Is he able to cloak his chakra signature? There are also fan theories about him being a reincarnated Jiraiya or a clone of the famous shinobi. Some even think he is Konohamaru’s father. Due to Jigen wearing a mask, he is likely someone we know even if he isn’t Jiraiya or Konohamaru’s father. I can’t wait to know his true identity!

What did you think of Boruto manga chapter 28? Did you enjoy reading ‘Flowers’? Let us know.