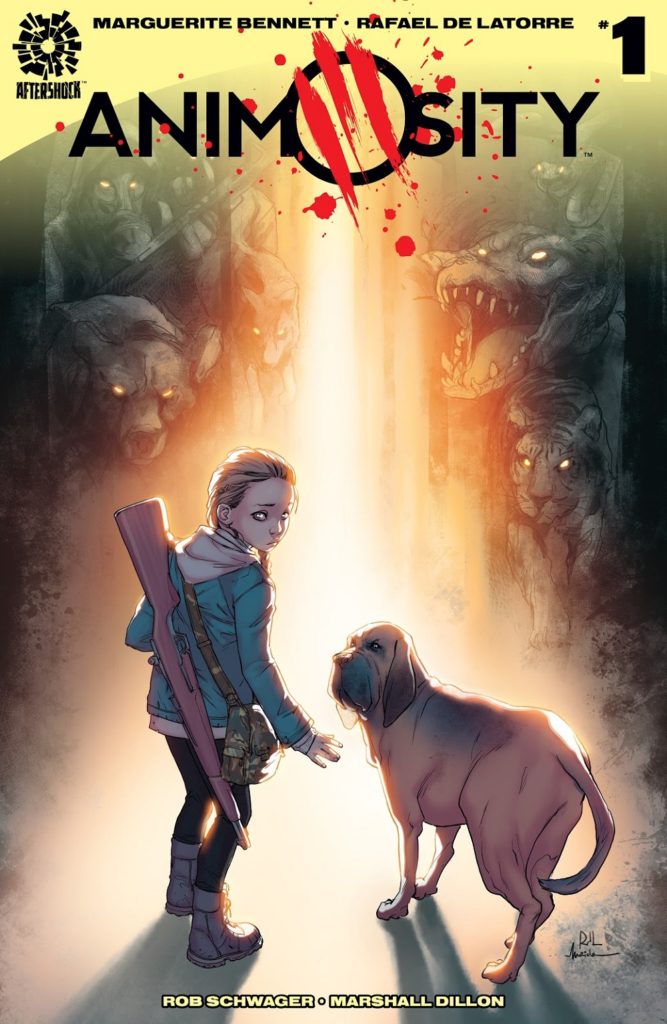 Legendary has acquired the worldwide film rights to Animosity from AfterShock. The comic book series is written by Marguerite Bennett with Rafael de Latorre serving as the artist. I highly recommend you read it!

I have been waiting for someone to give Animosity a film, TV, or even an animated adaptation. That’s why I am very happy Legendary has decided to bring this story to the big screen. It deals with a post-apocalyptic world where animals and insects have gained incredible intelligence. Think of it as Planet of the Apes but with the entire wildlife involved.

Our main protagonists are Jesse and Sandor. Jesse is an 11-year-old girl and Sandor is her loyal dog. After the prologue (Issues 1 and 2) we join them on their journey a year after the world-changing events. The comic book series is still ongoing so I am not sure what arcs the film will adapt. Jesse and Sandor meet many animals and humans (making both friends and enemies) along the way.

Now, a dog and his girl are trying to get away–out of New York City, and all the way to San Francisco, to the only person who might be able to protect and save her.

There is a lot of politics involved with animals and humans trying to figure out how to co-exist in the new world order. Of course, there are groups working toward complete supremacy. There is a lot of material for the film to explore if it is done right. Also, due to the numerous wildlife featured in the comic books, this film does require an impressive budget if we are to see some high quality CG animals. They might go for actual animals too. So, let’s see what happens.

The two spin-off comic book series are Animosity: Evolution and Animosity: The Rise.

The project is being overseen by Jon Silk with Lee Kramer and Jon Kramer producing for AfterShock Media. No writer or director is attached as of writing this. Other projects from Legendary include Skyscraper (starring Dwayne Johnson), Jurassic World: Fallen Kingdom, The Looming Tower on Hulu, and Lost in Space on Netflix.

Previous:Yuri on Ice Movie Featuring Young Victor Will Premiere in 2019
Next: The 100 5×08 Review: How We Get to Peace