Astronaut Nicole Stott Is Changing the World Through Art and Science 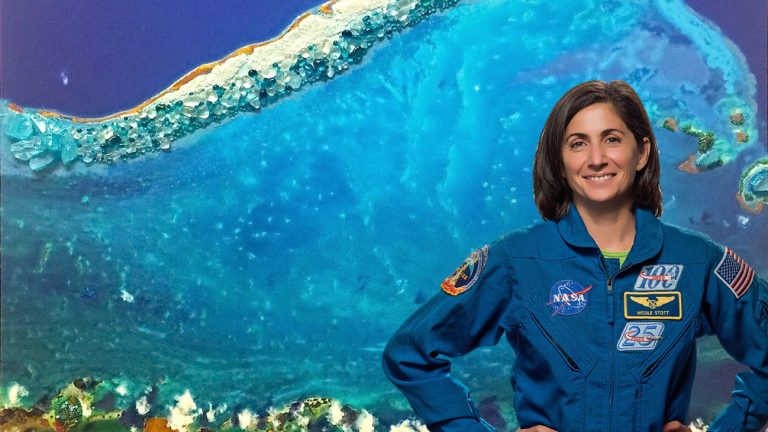 Image courtesy Nicole Stott and the Space For Art Foundation

After 27 years with NASA, astronaut Nicole Stott has been working on a different mission: combining science and art into something that can be used to heal and build human connections.  We talked with her about art therapy, the upcoming Crew Dragon launch, and even Star Trek.

Wednesday evening, at around 4:30PM EDT, SpaceX’s Crew Dragon is scheduled for launch. It’s the first time Americans will launch an American ship into orbit since 2011. This is a big step back into science, and that makes it a good time to look at some of our past heroes in the space field- like astronaut Nicole Stott.

Nicole Stott worked her way through several positions at NASA (including a run as an aquanaut on the NASA Extreme Environment Mission Operations (NEEMO) 9 mission) until being selected as an astronaut. She flew two spaceflight missions and spent a while on the International Space Station. Fun fact: she was the first person to do a watercolor paining in space! 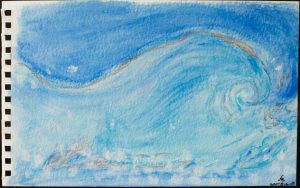 Stott’s painting “The Wave” was the first watercolor painted in space, during the Expedition 21 mission.

These days, Stott spends a lot of her energy on the Space For Art Foundation, the organization she co-founded. Their mission is to use space-themed art to build a sense of global community and connection. You might have seen their Spacesuit Art projects (spacesuits covered in children’s artwork) or maybe their Postcards to Space (an art exchange featuring children around the world).

Despite her schedule, Nicole Stott was able to make room in her schedule to answer a few of our (and your!) questions.

The Geekiary: You retired from NASA back in 2015 to do art and STEAM/STEM advocacy. How’s that going?

Nicole Stott: It’s going great! When I retired, my original mission was to do my own artwork. I wanted to share the spaceflight experience so that people know everything we do up there we do to make things better on Earth, and let people who didn’t know we had an international space station that we have one, that kind of interpretation of what I saw through the windows.

I’m very grateful that that’s grown into something I find a little more meaningful- the work I’m doing with the Space For Art Foundation. We do space-themed art therapy projects with kids around the world.

The Geekiary: You’ve done a lot with the SFA Foundation. Is there anything you’re working towards next?

Nicole Stott:  With our current project, we’re trying to involve children from every country on the planet. We’ve normally just worked with kids in pediatric care centers, hospitals, and refugee centers, but everybody on the planet has been affected by this pandemic. We know that kids are feeling isolated everywhere, so we’re opening it up to kids around the world.

We’d also love to start facilitating fellowships and scholarships for other young artists who want to use their artwork in a therapeutic way. We want to contribute to the research into how art and music and still nontraditional therapies can benefit everyone’s health.

The Geekiary: What kind of impact have you seen while using these non-traditional therapies? How is it affecting the kids you work with? 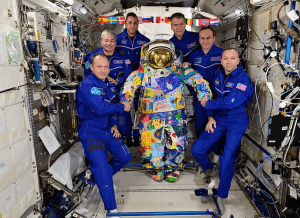 This suit, named “Victory”, is covered in art by kids in refugee camps, hospitals, and cancer centers. (Image Courtesy of the Space For Art Foundation)

Nicole Stott: Towards the end of last year we were able to take one of our suits back to a couple of the places kids painted. One was a refugee center operated in Paris. Several of the children were still there. They got to find their art on the suits, and they were so excited about seeing it.

These kids get it. They start to realize, “Wow, we are Earthlings. We live on a planet. We should already be behaving like crewmembers on Spaceship Earth.” Through their artwork coming together this way, they start to realize that they’re all Earthlings. They really can transcend the whole experience they’re having and really think about their future.

The Geekiary: Like a global connection through art and science.

I spoke to one little girl who is 7 years old, in a cancer treatment center, and we were painting. She said to me, “What you go through as an astronaut is a lot like what I have to do here. You don’t get to see your mommy and daddy and friends, and you have have to eat different food, and your body’s changing, and they’re doing tests on you.” I was floored by it, by how she just connected like that.

And that made me think on the research side- we need to explore how these kinds of therapies help people from a spaceflight standpoint. There is going to be a point where we’re heading to Mars, we can’t see Earth out the window, and we don’t have that connection to home anymore. The same kinds of things we’re doing with kids in hospitals [learning to build connections] are the same things we need to make available to astronauts in these small spaceships.

The Geekiary: You’ve been pretty vocal about breaking down the divide between techies and artists. How do you think studying art helps those pursuing hard scientific research?

Nicole Stott: To me, we don’t even have to go down that path. It’s like science and religion, there should be no conflict between those things.

Science and art- if you look at the premise of both of them, it’s has a serious nature to it with the desire to provide an explanation. That’s true for science, it’s true for art. Underlying that there’s the need to see things and wonder about them, and pull things together.

Think about telescope imagery. They’re all false colored images that scientists are using to understand, “That blue is this kind of gas, the red is this, this color means it’s moving away from us.” Scientists are already using art to understand data.

Our brains work better when they can visualize, and spaceflight is so complex. I just geek out over how complex it is. To get Bob and Doug [Bob Behnken and Doug Hurley, the veteran astronauts flying the Crew Dragon] off that launchpad safely into space, then come home safely- there’s so much involved in that. Somehow we as human beings we manage to do it.

I look at that as a masterpiece, a work of art. As humans we come together to make really complex things happen, and on top of that it looks gorgeous when it does happen.

The Geekiary: Speaking of the launch, have you seen SpaceX’s Crew Dragon in person?

Nicole Stott: I saw it when it was still under construction, not the up-close final version. But you gotta admit, it’s really cool. I personally would like to see it get to a point where like the shuttle it was landing on a runway, but this is all very exciting. [Editor’s note: the Crew Dragon will make a water landing off the coast of Florida rather than a controlled runway landing.]

The Geekiary: At the Geekiary, we love to talk about fandom and the things we love. What are you into right now?

Nicole Stott: We’ve been watching through The Expanse. My husband is the biggest “how does sci-fi become fact” person on the planet, so there’s always something on the screen that’s either out new, or even going back to the original Star Trek series.

It’s why I think art is so important. This is us thinking about what our future might be, and making it happen.

The Geekiary: Closing up with some fan questions here:

Jack: Did you have any problems with sexism and misogyny? Did you get any warnings from other women in the field? 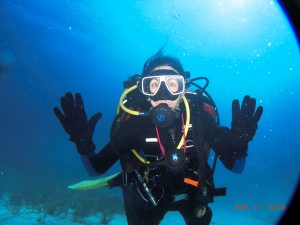 Stott training for her trip to the Aquarius Underwater Laboratory near Key Largo, Florida. (Image courtesy of NASA)

Nicole Stott: You know, I was very fortunate to not have had to deal with that much. There were tiny little pockets of it, but I would say insignificant. I think NASA on the human spaceflight side of things has done a wonderful job with the evolution of that.

I think you end up surrounding yourself with people who care about and support you. In the end, I like to say, “The rocket ship doesn’t care if you’re a boy or a girl.”

Kenzi: How did the NEEMO compare to being on the ISS? What were the physical and mental differences or similarities between being underwater or in space? [Editor’s note: NEEMO 9 was one of NASA’s underwater research missions. Stott still holds the women’s world record for longest saturation dive (18 days).]

Nicole Stott: It was the absolute best analog to flying in space. We all joke that you go to innerspace to learn how to live and work in outer space. Other than the fact that you’re in water it’s absolutely the closest thing to the ISS, from the extreme environment side of it. You can’t just walk out the door and swim to the surface.

Matt: Which is your favorite Star Trek?

Nicole Stott: Wow, that’s hard. I’m a fan of the original TV series, that’s what I grew up with. We just got done watching Scott Bakula [Enterprise] and I love that one, too. I like them all… but the old retro original was probably my favorite.

Thanks to Nicole Stott for her time! To see some more pictures of those incredible art suits, head over to the Space For Art  Foundation website.

If you more space in your life, watch SpaceX’s Crew Dragon launch Wednesday at 4:33pm EDT- then come back here and tell us what you thought!