It feels like it’s been forever since we launched into deep space with the crew of the Rocinante, but The Expanse has finally returned. The change in platforms is noticeable throughout The Expanse Season 4, from the production values to the number of episodes to the pacing, but one thing is for certain – this is still the same quality show on Amazon Prime that it was on SYFY.

This show has always excelled at political commentary, which makes sense, as most science fiction is inherently political. The Expanse Season 4 revolves around many historical themes – such as the gold rush and new nations being colonized by refugees – and also raises some intense philosophical discussions, particularly with the Belters. The way these threads weave together is fantastic, each plot connected in ways we don’t yet fully know. Bobby and Chrisjen’s plots, after all, were mostly setup for the next season and clearly have something to do with the huge hunk of rock that’s now headed for Earth.

There is always a lot to talk about when an entire season releases at once, and it’s difficult to know where to begin or what to focus on, especially with a show as nuanced and intricate as The Expanse. I’ll do my best to hit the highlights of what was, once again, another stellar season of television.

The overarching theme of the season was expansion, and this is the one point that tied all of the subplots together. Everyone has a different opinion on the colonization of other systems that were opened up by the Ring. There are

Belters, like the colonists on Ilus, who want a better life, to make a home on the new world and finally have something for themselves. But there are also Belters who realize that colonizing will lead to a destruction of the Belter culture and way of life – like agriculture leading to the death of nomadic societies. It’s a debate happening on Earth, too, where overpopulation has drained the planet of its resources and so many people have no hope of bettering their circumstances. And on Mars, the opening of the Ring has taken away their very reason for being; as Esai said to Bobby, why would anyone want to spend their life terraforming a planet they’ll never get to benefit from when there are hundreds of inhabitable planets ready to be settled?

It’s a complex issue that contains a lot of other questions, like who owns the sky? Earth and Mars blocked the ring and don’t allow anyone through, but when the Barbapiccola squeaks through and is able to establish a settlement, the UN declares it illegal. They don’t even recognize it by the name given to it by the colonists; they call it “New Terra”, a massive slap in the face to people who have never even seen Earth.

Everything that happened on Ilus was really interesting, though I do wish we’d gotten to learn more about the protomolecule and the ancient war between civilizations. As it stands now, we appear to be done with that particular plot, but I can’t imagine that’s the end of it. The gate (or whatever) is still open on Ilus, so I have to believe it will come

into play somehow, somewhere further down the road. After all, that was only one planet, and the newly-elected Secretary Gao has just promised to open up the Ring for colonization. But everything else felt very old-school sci-fi with micro-organisms that made people blind and slugs coated in paralytic neurotoxin. What a powerful sendoff for Miller, especially with Holden agonizing over the last thing he said to him. And seeing Naomi set foot on a planet for the first time was inspiring. I loved how the men hung back and let her be the first person to step off the ramp.

Also, I felt that The Expanse Season 4 was a really great season for Amos. Wes Chatham showed a lot of range this season, and the scenes after Amos went blind were so great. 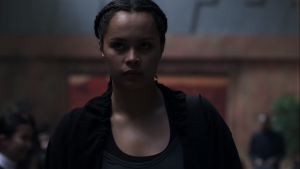 However, I was most fascinated by what was going on with Mars in The Expanse Season 4. This is a planet struggling to reconcile its existence with the fact that it’s raison d’etre is gone. With the war over, thousands of veterans are out of work, and it’s clear that the society can’t support its population. It’s like the Soviet Union around its collapse – a massive, militarized country supported by an economy that basically just disappeared overnight. It’s interesting to watch a planet that was so focused on duty and honor devolve into one giant black market and especially to see someone like Bobby, the perfect Martian, end up sucked into a life of crime. 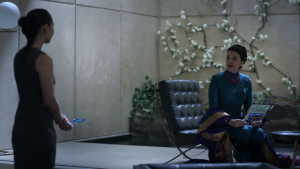 Chrisjen’s arc was a bit lackluster compared to everything else going on. Shohreh Aghdashloo was fabulous as always, and wow her fashion was on point this season, but Chrisjen mostly stood around and swore at people. Obviously her fall from power and the election is going to be important in what comes next, and it was a nice commentary on how power – and wanting to keep it – will change people, but for the most part, I just didn’t like whenever the POV switched to Earth. You know that Chrisjen wanted to protect people from an unknown threat, but unlike in previous seasons, it was very difficult to dislike her opponent, who just comes off as genuinely nice.

I am looking forward to seeing how Bobby’s and Chrisjen’s arcs eventually tie together. 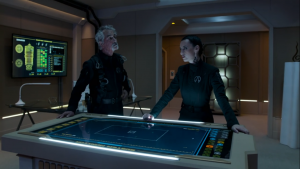 The conflicting loyalties of the various Belter factions left me mostly confused during their scenes. I wasn’t always sure what was going on and who was in favor of what. I really wish Drummer had been given more to do. Cara Gee is amazing and deserves something a bit meatier, but after what happened to Drummer last season I’m sure action sequences are out. Marco was a great introduction, because every science fiction series needs a charismatic megalomaniac as its villain. And I was surprised I teared up when Ashford died, because I remember not liking him much in season 3. I think he redeemed himself this season; he was a man who had seen too much violence who really wanted to grasp onto the barest chance of peace. The parallels between him watching that video of his son and his own death were chilling.

Perhaps the main takeaway from this season is that people are people, no matter where they are. Ilus descends to violence rather quickly. Without a purpose, Mars is succumbing to corruption. Chrisjen is annoyed at questions about healthcare when there is a potential civilization-destroying threat on the horizon. And Holden can’t believe everyone is caught up in petty squabbles when the planet is going to kill them in about 24 hours. It’s a commentary on human nature, and not a particularly good one: put us literally anywhere in the universe, and we still all want to kill each other. Though it’s true that centuries-long bad blood between the two groups won’t just vanish because they’re on a fancy new planet.

But it is also about the resiliency of the human spirit. The Belters on Ilus were ready to die rather than be forced from their homes again, and once you removed the poisonous influence of Murtry, the scientists and the Belters seemed willing to work together. Enduring a hardship like that together goes a long way towards ending conflict.

One of the things I asked the cast and crew when I got to speak to them about The Expanse Season 4 at NYCC in October was the change from weekly episode drops to full-season streaming. There are pros and cons to this, which is a discussion that can be had about virtually anything. You lose some of the “watercooler” factor by streaming an entire season at once; there is little to no opportunity to speculate along the way, as you go immediately from one episode to the next. A show like The Expanse fosters some excellent discussion and theories. But a show like this also benefits greatly in binge-format; it is easier to spot callbacks and follow plot threads when you don’t have to wait a week between episodes.

Some people may have not liked that this season was three episodes less than usual, but I thought that having ten episodes made for a tighter narrative, and the lack of commercials meant that there was no breaking up the flow of a scene or losing the tension of an episode.

This season felt bigger. You can tell that this series had a decent budget at SYFY – the effects were always well done – but whatever the budget at Amazon is must be massive. The world-building has increased and we spent so much time outside in season 4 – and Mars! We actually got to spend a significant amount of time on Mars, which I have been waiting for since the show started. The cast has expanded along with the universe, and Lyndie Greenwood (Elvi), Keon Alexander (Marco), and Burn Gorman (Murtry) in particular were phenomenal additions.

The camera switch between Ilus and the other locations took me a while to notice but I thought it was a nice touch. It gave that location a more cinematic feel. The story on Ilus was often intercut with one of the other plots, which I think took away from the sense of isolation it was supposed to convey.

All in all, The Expanse Season 4 was ten episodes of fabulous science fiction. The acting was superb, and the episodes flowed together nicely. It was like watching a giant movie broken into chunks rather than watching ten episodes of a television show. I liked the little details (like Amos’s contact list) and how they dropped in some things from previous seasons (Clarissa, Prax) and generally how everything tied together.

This is such a smart, well-written show that really needs a bigger following. And I’m so happy that they’ve already greenlit a season 5, otherwise the current season’s ending would be cruel!

The Expanse Season 4 is now streaming on Amazon Prime.

1 thought on “The Expanse Season 4 Review: People Are People No Matter Where They Are”