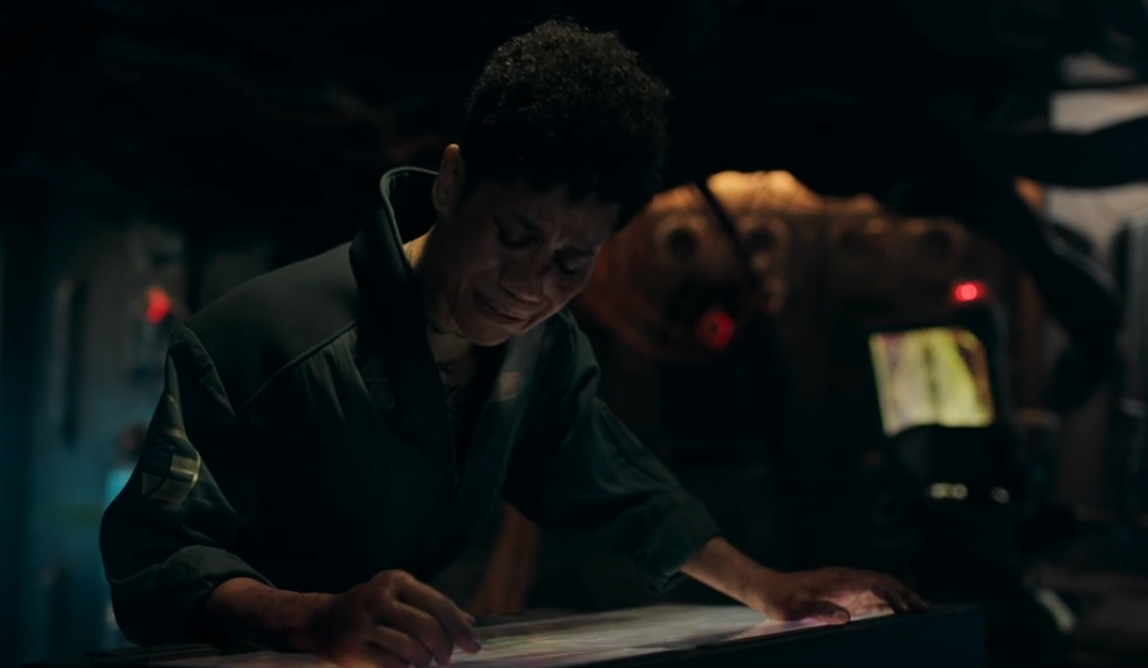 As we near the end of season 5, “Hard Vacuum” gives us a bigger overall picture of the repercussions of Marco’s attack on Earth. The fledgling interim Earth government is at odds, Belters are bickering amongst themselves, and Naomi is on a ship loaded with explosives luring basically everyone she loves to their deaths.

Look. If you didn’t have a crush on Naomi before this, “Hard Vacuum” should push you over the edge. Aside from the fact that she survived a jump in space, the way she is able to modify the fake distress call in order to signal to the others that something is amiss is just pure genius. This entire episode was just Naomi being badass and I am 100% here for it.

I mentioned in my review last week how Naomi’s space jump seemed absolutely ridiculous but is actually firmly based in science. I appreciate that in this episode, they show her suffering from the effects, as difficult as that was to watch. Her skin is blistered, her eyes are bloodshot, and her joints are even swollen. The Expanse does not pull punches and seeing Naomi struggle to survive aboard a disabled ship is devastating. My heart broke for her when she found the fake distress call. I was kind of hoping Holden and the others would be able to tell something was up, but Naomi’s solution was so much better because it involved Naomi being amazing.

Honestly, Dominique Tipper is killing it this season. Hey, Prime Video, submit her for all the awards. All of them.

Cara Gee is also completely killing it this season, especially in “Hard Vacuum”. Drummer’s reaction when Karal told her that Naomi was dead was shattering. I am ready for Drummer to just go completely feral; that is now three people whom she cares about whose deaths she believes she is responsible for, because she had the opportunity to kill Marco and she let him go. That moment of pure rage and grief was almost uncomfortable to watch. 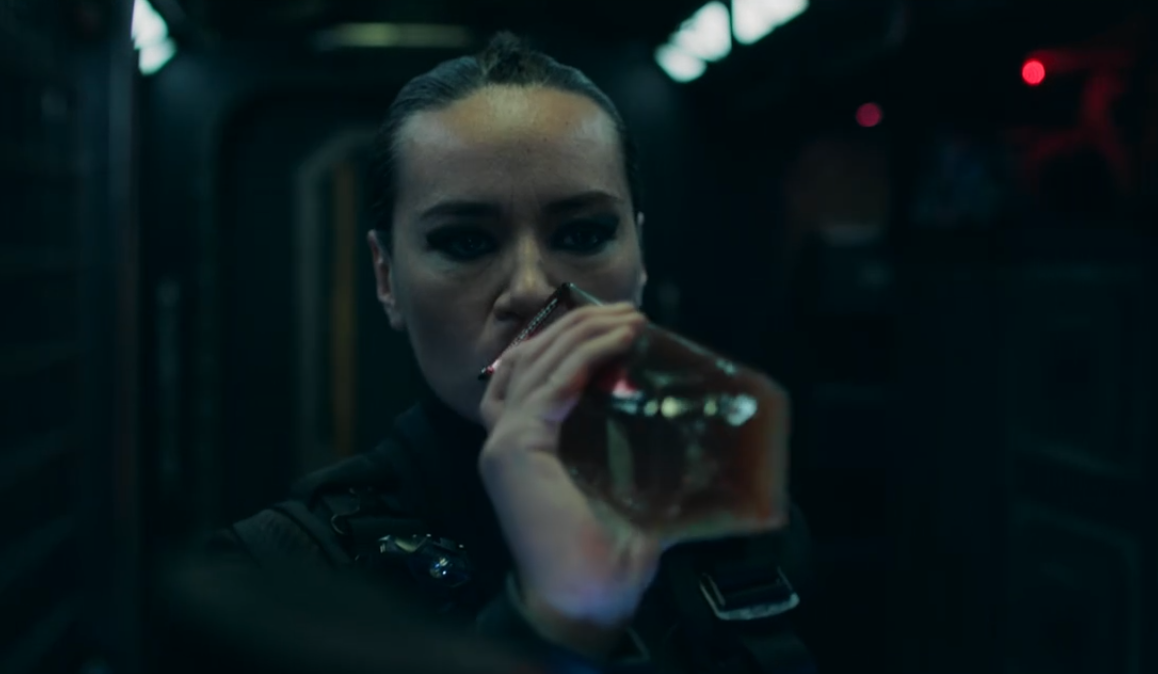 Drummer’s crew seems to be splintering. I suspect that before the season is over, they will be fully split into pro-Marco and anti-Marco factions. They all agreed to join the Free Navy, but many of them still recognize it wasn’t a choice, and after seeing what happens to ships who make the “wrong” choice, it will be even harder for them to break from Marco and his followers. This season of The Expanse really seems to be harping on the idea that sometimes people are forced to take sides, even if they don’t want to. And sometimes, they come to regret the choice they made – even if they had little choice, in the end.

Not to mention, Karal is there making it clear that Drummer’s only in charge in theory in “Hard Vacuum”; she flat out says Drummer is only still captain because Marco allows her to be, and she was caught “trying on” the captain’s chair. She was needling Drummer about Naomi’s supposed death as well; I wonder if she wanted Drummer to attack her so she had a reason to kill her and take over the ship. I can’t imagine Marco didn’t have some ulterior motive when he specifically sent Karal in the exchange. Is she trying to show Drummer’s crew they would be better off without her in charge, someone who isn’t fully committed to the cause?

Acting Secretary-General David Paster is doing a much better job than I expected. He seems extremely competent, listening to all sides of a discussion, tabling it when it gets too heated. From the way he was introduced, I thought he would either abdicate and give control to Chrisjen or he would just knuckle under and do whatever she wanted. But Chrisjen has grown since season 1 (character growth, imagine that) and is perfectly willing to be part of a council. She is even advocating restraint, which is very unlike her.

The September 11 parallels are staggering in “Hard Vacuum”, from Paster’s speech to the discussion on which civilian targets to attack in retribution. It’s hard not to compare the United States’ never-ending war in the Middle East over the actions of a small number of terrorists and Earth’s desire to punish all Belters for the sins of a few. As much as I’m tired of the whole “Avasarala was right all along even though no one listened to her” trope on this show, you know this isn’t going to go well if they follow through on the plan to attack Pallas.

Chrisjen is correct that attacking civilians as a show of force will only radicalize the Belt further, and it’s extraordinarily stupid (and immoral) to strike at a tangentially related target just because you can’t find the desired target – in this case, Marco. 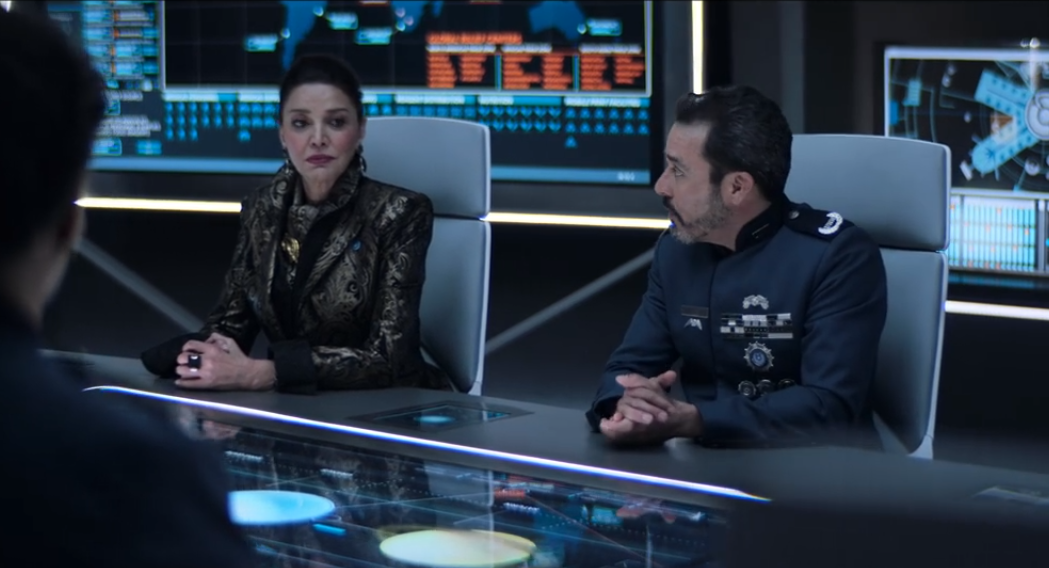 There are a couple of scenes on The West Wing that came up while discussing “Hard Vacuum” which actually fit quite well with what’s currently happening on The Expanse. It’s the idea of a proportional response, and the dangers of responding with too much force. The problem is that Earth doesn’t have allies they have to worry about. They don’t need to worry about optics. Yes, the casualties are extensive, and yes, the attack was largely unprovoked, but the answer is not to kill innocent Belters.

I keep meaning to mention this in every review and forgetting, but it’s not hard to recognize that Belters have legitimate concerns. They’ve been treated extremely poorly by both Earth and Mars for a long time, and it’s unsurprising they’re uniting behind a charismatic (if highly narcissistic and potentially psychopathic) leader who promises that life will be better for them. But, as we’re learning this season on Attack on Titan, this kind of violence is a never-ending cycle.

It’s hard to believe there are only two episodes left in the season, and that we only have one more season to wrap everything up. How is that even going to happen?