Atari – the company most known for creating one of the oldest video game systems in existence – is branching out into the hotel industry.

The name ‘Atari’ conjures images of retro gaming and nostalgic arcade systems, but the company is going in a different path nowadays. Later this year they will begin construction on the first Atari branded hotel. The premiere destination? Phoenix, Arizona.

Atari, a trailblazer in the gaming industry, is pioneering an exciting new concept: a unique lodging experience combining the iconic brand with a one-of-a-kind video game-themed destination. Atari Hotels level up hotel entertainment with fully immersive experiences for every age and gaming ability, including the latest in VR and AR (Virtual and Augmented Reality). Select hotels will also feature state-of-the-art venues and studios to accommodate esports events.

More than 2.5 billion gamers across the world spent more than $152.1 billion (US) on games in 2019 alone; an increase of +9.6% year on year. One of the most distinctive trends in gaming is gamers gravitating toward recognizable intellectual property. Atari Hotels will offer consumers exactly that, marrying the origins of gaming and the future of the booming industry into a fun and unique travel destination.

I wouldn’t have pegged Arizona as the testing ground for a high-end concept. With the Super Nintendo World expected to open up in Orlando in just a few short years, I’d have thrown this unique gaming hotel test at that potential market. But what do I know? This isn’t my industry. Maybe this will draw some tourism dollars to Arizona.

The design does look pretty darn cool. It has the Atari logo emblazoned proudly up the side of the building. It sounds like there will be a lot to do at the hotel itself, so gamers should have a pretty fun time during their stay. 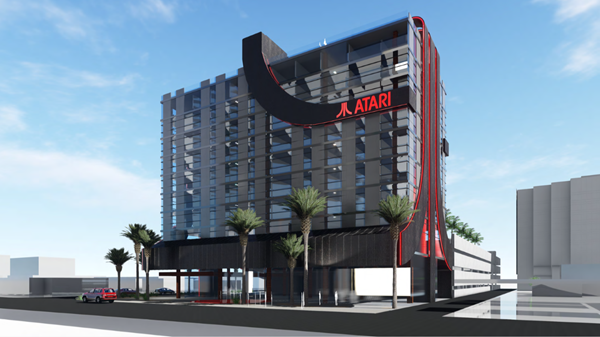 According to CNN, Shelly Murphy, the CEO of GSD Group, says that rooms will have retro gaming themes, with some being themed for Ready Player One. There will also be party spaces with numerous consoles available, which will no doubt draw in a lot of local business for things like birthday parties.

While I may not view Phoenix as a tourism hot spot, that part of their plan is something rather smart. And I’m not saying that I, a grown woman in her mid-30’s, would throw a big gaming birthday bash for herself at one of these places but…. okay, yes. Yes, I am saying that I would totally do that. How fun would that be?

These locations would also be pretty well suited for gaming conventions. They already have the consoles. They’ll have event space. They’ll have hotel rooms for out of town attendees and guests. So why not? Convention organizers, take note!

Other hotels are planned for Las Vegas, Chicago, Denver, Seattle, Austin, San Francisco, and San Jose. Of all of these locations, the Vegas one sounds the most interesting to me. Of all the places to go completely overboard with teeming, Vegas is definitely it. I would not be surprised if that one gets one of the planned esports venues. There are no planned dates for any of these additional locations, however.