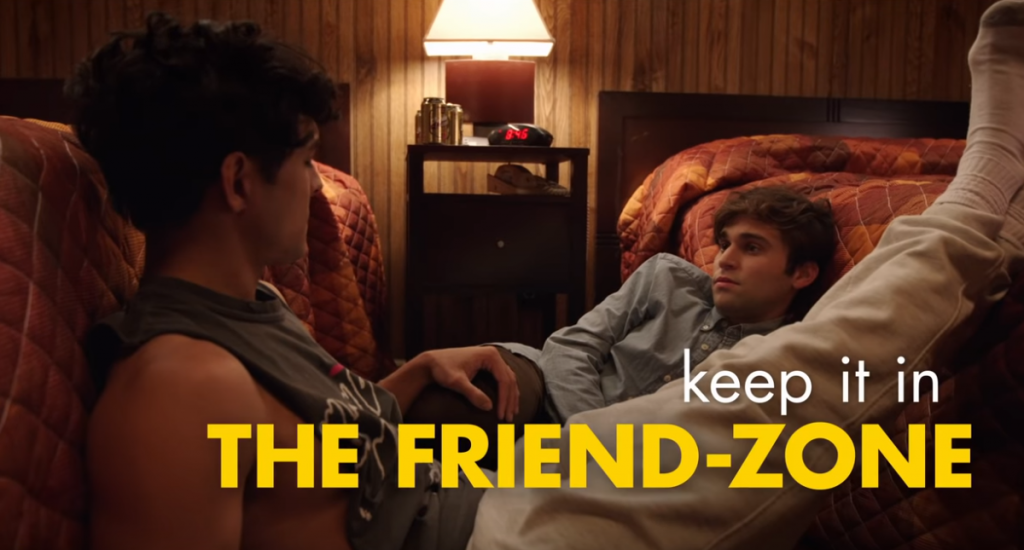 The Thing About Harry (Image: Screengrab)

The trailer for The Thing About Harry shares a lot about the premise, but I’m not really sure how I feel about this movie and the information provided by other promotional content.

Apparently, we have openly gay actor Borelli playing a character named Sam. He’s a gay Chicagoan who has to go on a road trip for an engagement party. Sam’s forced to travel together with his high school foe Harry (Terho). Of course, there’s a spark between the two. Sam’s friend even urges him to begin a romantic relationship with Harry.

Now, I have to say I’m a bit hesitant to get too excited about this film. The premise is something I’m unable to fully embrace as of writing this.

I would like a better explanation about what the term “foe” means as far as this film’s narrative is concerned. I can get behind mutual enemies becoming lovers over time. But I’m not behind a bully coming out the closet and professing their love to the person who suffered from the bullying. At least, not before a whole lot of honest conversations and growth from both people.

I had an issue with the ‘bully-and-survivor-falling-in-love’ narrative in Sex Education and I don’t want to sit through the same thing with The Thing About Harry.

The Thing About Harry is directed and co-produced by Peter Paige (Queer as Folk).

“It’s been an honor to partner with Freeform in making great television with LGBTQ+ characters as leads,” Paige and his co-producers shared in a statement. “True equality can only be achieved when you see yourself reflected in the movies, music and stories that paint our culture.”

Paige has a cameo in the film. The cast also includes Britt Baron and Karamo Brown (Queer Eye).

Talking about Freefrom, the network has been offering a lot of queer content to viewers. Of course, we all know about the Malec pairing from the controversial Shadowhunters TV series.

Coming to the newest offerings, we have the highly enjoyable drama/comedy titled Everything’s Gonna Be Okay from out queer writer and actor Josh Thomas. I even recorded a reaction video of the premiere if you are interested in watching.

The network also has Motherland: Fort Salem. The upcoming show will have queer representation. It is scheduled to premiere on March 18, 2020, for Women’s History Month.

Anyway, for those interested, Borelli came out back in November 2018. The young actor made his debut as the gay character Dr. Levi Schmitt in ABC’s long-running (will it ever end?) Grey’s Anatomy series in 2017. He is still part of the cast going into season 16.

I stan queer actors being able to play queer characters and making coin. We had an entire discussion about the opportunities available to queer actors in Hollywood over on our YouTube channel.