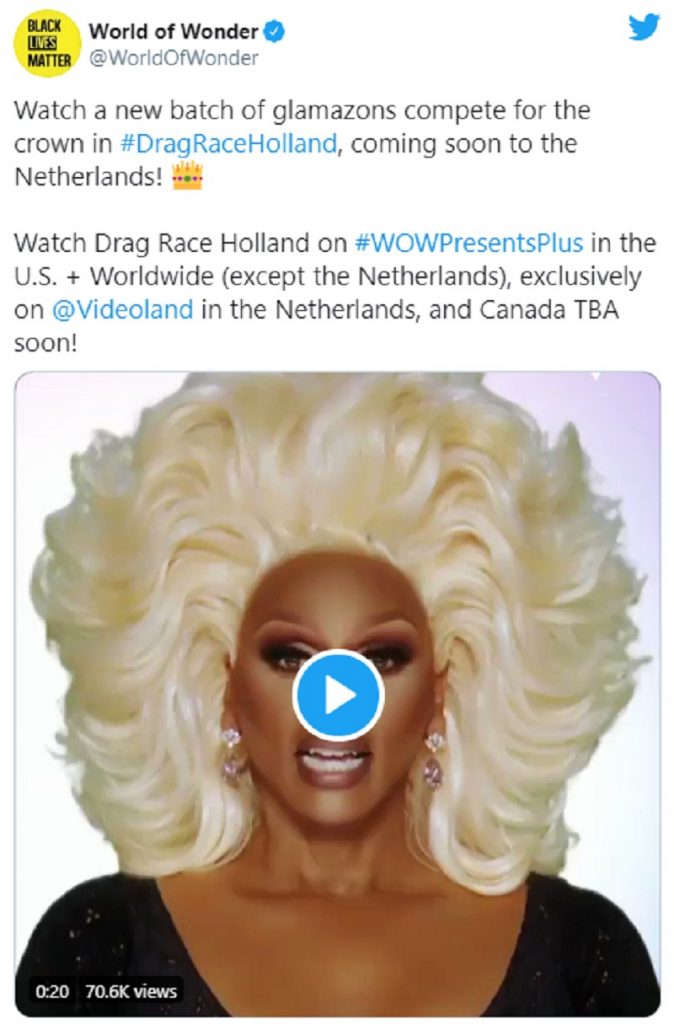 Too much of a good thing? Meh! RuPaul doesn’t know her. It’s been announced that Drag Race Holland will be released later this year.

The RuPaul’s Drag Race franchise continues its journey of world domination. Drag Race Holland will be brought to you by World of Wonder (executive producer), broadcaster RTL, and Vincent TV (a Netherlands-based production company). You just know a queen is going to make a joke about inviting someone to explore their “Nether land.” I can’t wait for Drag Race Australia to be a thing so someone can joke about taking a person “down under.” Okay, I’ll stop.

The upcoming show will feature 10 Dutch queens (they’re a mystery right now). The series is currently scheduled to debut later this year. The judging panel as well as the line-up for the guest judges are yet to be announced. I’m not familiar with Dutch queens. So, I’m interested in learning more about the drag scene in Holland.

Also, will famous YouTuber Nikkie Tutorials be a main or a guest judge? She has been posting videos with RuPaul’s Drag Race queens on Youtube. So, I’m intrigued. Having a transgender woman be part of the judging panel would be amazing. Let’s see what happens.

I was going through Twitter and saw some concerns about the upcoming show not having too much diversity. Apparently, there aren’t many PoC Dutch queens out there? Again, I don’t want to say anything before the show actually debuts. Considering the RuPaul’s Drag Race franchise is racially diverse, it would be surprising if Drag Race Holland didn’t follow suit.

According to Variety, Ellen van den Berghe, the head of programming of RTL’s Videoland which commissioned the show, said, “outstanding, urgent and groundbreaking Emmy Award-winning program fits seamlessly into the values and ambition of Videoland.”

Take note; Drag Race Holland will be exclusive to RTLs SVoD platform Videoland, in the Netherlands. It will also be available on WOW Presents Plus (World of Wonder’s streaming service).

“We firmly believe in charisma, uniqueness, nerve and talent and can’t wait to welcome these 10 talented queens into the Drag Race family,” said Fenton Bailey and Randy Barbato, World of Wonder co-Founders. “It’s fantastic to work with RTL and Vincent TV on launching a Dutch version of the franchise, but it’s also a privilege to be able to bring this brilliant new series to an international audience too, via our own SVoD Platform WOW Presents Plus.”

Of course, I’ll be keeping an eye on this show. Maybe I’ll do reaction videos over on The Geekiary’s YouTube channel. I will have to see what the accessibility is like for me. I’m currently doing video reactions of Drag Race Canada if you want to check them out.

For those interested, RuPaul’s Drag Race just got nominated for an Emmy in the ‘Best Competition Program’ category along with a handful of nominations in other categories. The series has been nominated for more than 2o Emmys since it’s inception in 2009. You can read the full list of 2020’s Emmy nominations here.

While you wait for Drag Race Holland, the six-episode docu-series RuPaul’s Drag Race: Vegas Revue will debut on August 21, 2020.