Welcome to the Ballroom 1×07 Review: The Tenpei Cup 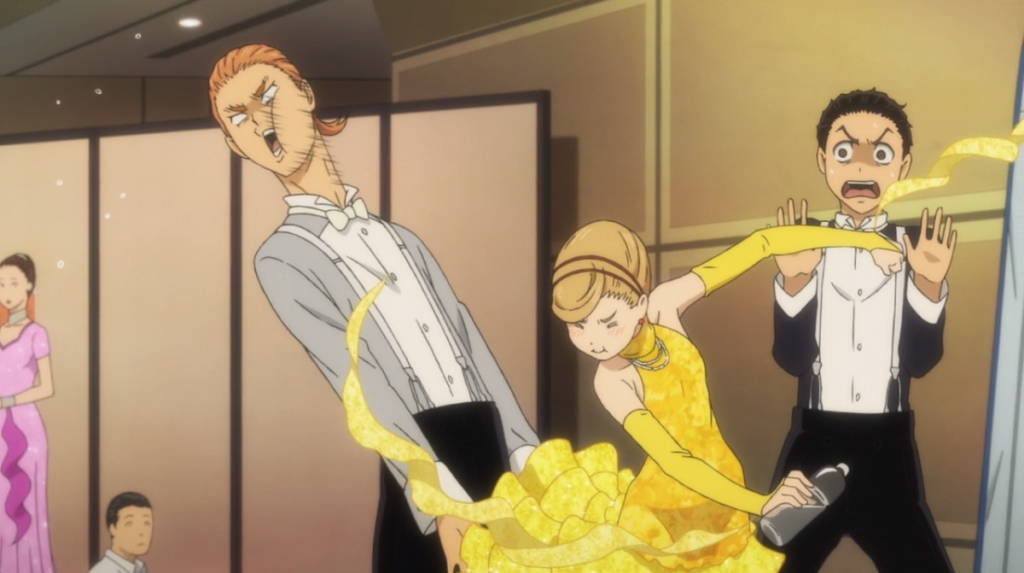 I love dancing, even though I’m terrible at it, which is why I fell so hard for Welcome to the Ballroom when I started reading the manga. Even though the dancing in this episode is great, it was far from the best thing about “The Tenpei Cup”.

I’ve complained a little bit about the treatment of the female characters in this series so far. The issues in their characterization are present in the manga, and they do get better, so I knew I just had to power through it. “The Tenpei Cup” goes a long way in calming me down, because after last week – where Shizuku and Mako are treated as literal prizes in a competition between Gaju and Tatara – the girls finally get a bit of their agency back.

Shizuku has taken a backseat in the past few episodes, but she showed some fire when she felt that Tatara was dismissing her ability. She’s come across as sort of meek recently, but “The Tenpei Cup” showed that she isn’t; she is a professional dancer, and she obviously would have taken offense to someone like Tatara believing he could out-dance her – even if it was Gaju who mouthed off.

The big thing, though, was Mako standing up for herself. Gaju has been talking smack about his sister since they showed up at the dance studio, and in this episode she finally had enough. She punched him, and punched him good! She still ran off crying, but you can’t really blame her; he insulted her dancing. Also, he was being a jackass.

Hyodo also reappeared – with his mother! I very much enjoy his relationship with Tatara. Hyodo is intrigued and challenged by him, but also seems to be genuinely supportive of his dancing career. It makes me happy. I feel like the best rivalries are the ones where they can inspire each other to do better, rather than simply trying to crush each other.

As for the rest of the episode, as amusing as it was for Mako’s falsies to explode all over the floor, that seemed a little too ridiculous; the contrast of something that silly with the more intense moments of the episode was kind of jarring. I am impressed that both she and Tatara were able to keep dancing. Mako wasn’t even fazed.

Did you guys see “The Tenpei Cup”? What did you think?