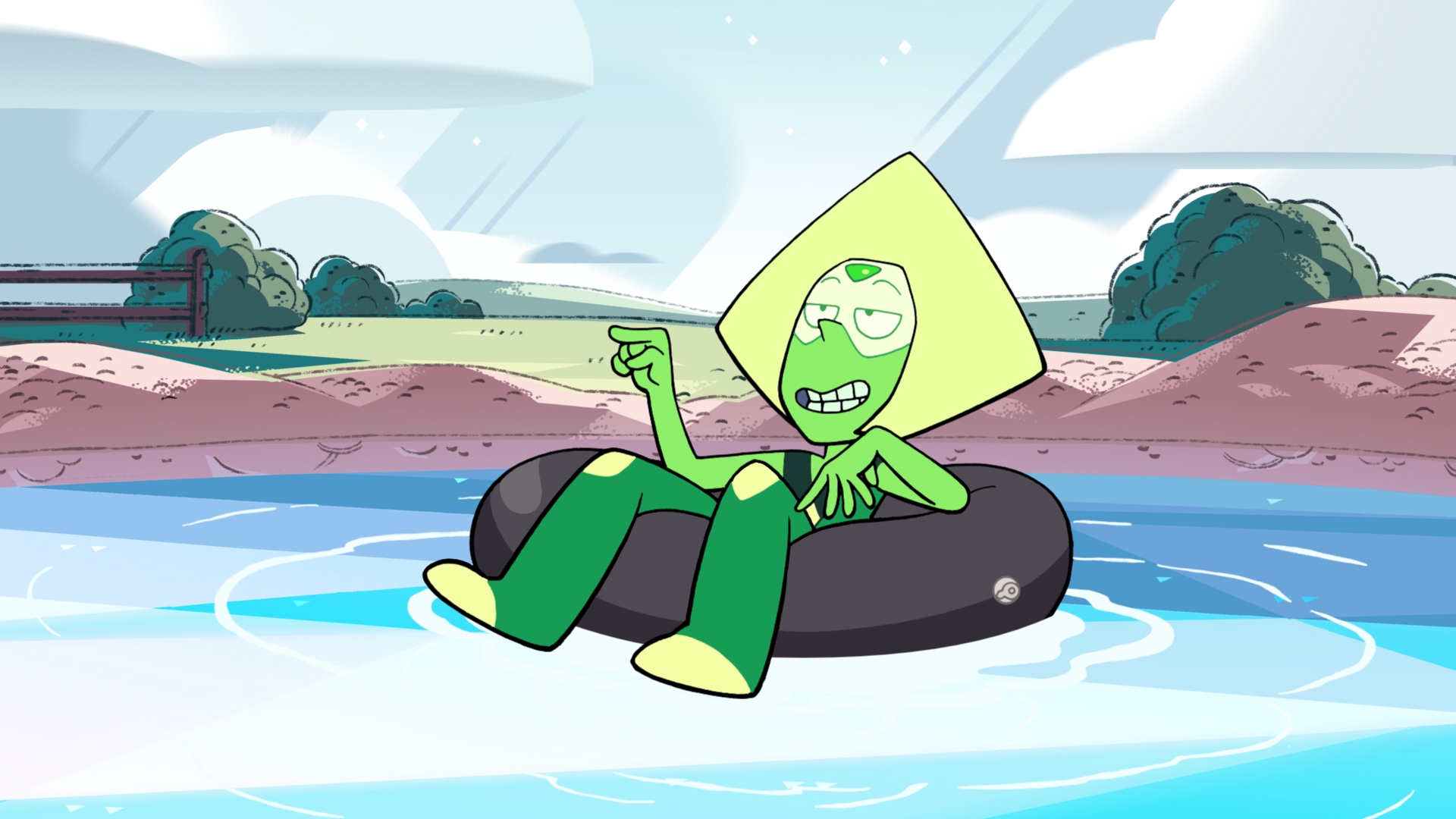 Considering how much I loved the first three episodes of this “In Too Deep” series, I was surprised to find that I wasn’t all that fond of “Barn Mates”…that is, until I rewatched it.

That’s right, rewatching is one of the absolute best parts of Steven Universe, because it’s made me love episodes that I wasn’t sure about at first – like “Barn Mates” (although I still haven’t wrapped my head around season one’s “Cat Fingers”). And of course I’ve also discovered meaning to things that I missed the first time around…it’s just too fun and awesome of a show to only watch once.

But I digress. After having so many FEELINGS about Lapis after “Same Old World”, I found her more than a little bit difficult to handle in “Barn Mates”. And I didn’t like that, because Lapis has had a really rough time of it, and she really does deserve some peace and quiet. I at least understood that Lapis couldn’t fathom how living with Peridot would give her that peace and quiet.

For my part, though, Lapis’ continuing attitude toward Peridot was hard to handle, especially when I’ve come to love Peri so much (mostly thanks to January’s Steven Bomb and of course “Gem Drill”). It was only during my rewatch of “Barn Mates” that I really understood the situation from Lapis’ point of view. 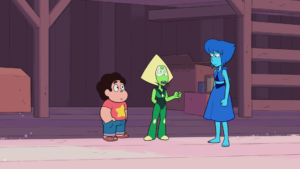 Were you ever bullied in your life? In high school, or college, online, or anywhere else? Well, put yourself in Lapis’ shoes, if you can – because that’s what I did. I imagined what it would be like to have one of the people who has bullied me come back around and tell me that they’ve changed.

And then I imagined being told that now I had to live with that person, and suddenly, it was like a light bulb appeared over my head. Of course I was still torn throughout my entire rewatch, because Peridot was trying so darn hard to prove that she really had changed…and on top of that she had some really great quotes in “Barn Mates”, first about her new “compact look and capacity for friendship”, and then the upbeat and perfect line, “I like the cut of your gem, Steven Quartz.”

Of course, none of this was getting through to Lapis, though as this is Steven Universe, I had my hopes that eventually Peridot would figure out something that would click with her former enemy. And I couldn’t help but love that Peridot told Steven that she wanted Lapis to understand that she’d changed, but she never used the word “make”. Peridot wanted Lapis to be okay with her, but she wanted this to be on Lapis’ terms.

(Seriously, things like that are why I love this show so much.) 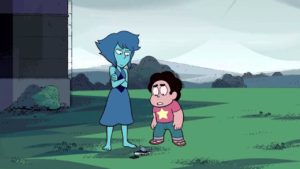 Now, while I understood Lapis’ reaction to the little pond that Peridot made for her, my heart went out to Peridot when she gifted Lapis her favorite thing – the tape recorder that Steven gave her, the item that kept her “grounded” while she was getting used to Earth – and Lapis promptly broke it. Yet even then, Peridot kept trying (she is a stubborn little Gem, after all), to the point where she basically told Lapis “tell me what you want, whatever it is, I’ll do it”.

Unfortunately for Peridot, what Lapis wanted was for her to leave, even after Lapis heard Peridot’s story about being stuck on Earth – a story that very much mirrors Lapis’ own tale. (Yes, bad pun, sorry not sorry.) And yet again I had to remind myself of all the horrible things Lapis had been through, some of them at Peridot’s hands, when Peridot told her that she didn’t have to be alone and still Lapis held her ground regarding them being “Barn Mates”.

Thankfully even after all of the drama between Lapis and Peridot, the episode ended on a mostly positive note. Before Peridot could actually leave, a homeworld ship arrived, causing Peridot to run back to the barn yelling, “They’re going to wipe my precious grin off the face of this planet!” (Another perfect line; I mean really, it’s practically impossible to not love Peri these days, amiright?) Steven being Steven, he stepped in front of Peridot to protect her; and then Lapis being Lapis, she stepped in front of Steven to protect him…and smacked the ship right out of the sky.

Garnet, Amethyst, and Pearl arrived just in time – that being, a moment too late to do any saving themselves, which allowed Lapis and Peridot to finally have a moment where they “showed each other their sweet”, with Lapis asking Peridot if she was okay, causing Peridot to giggle, which then made Lapis blush, and it was all just too perfect for words. (I can’t be the only one who hopes to see their relationship bloom…and perhaps even fuse…right? I mean, despite the negative parts of their history, and because of their current similar situation, of all the Gems they are most likely to understand each other…)

Honestly, “Barn Mates” could have ended with that little moment between Lapis and Peridot, but instead it left us with a bit of a cliffhanger – because the crashed ship opened up and out climbed a RUBY! Needless to say, that left me itching for the next episode, but upon reflection, in the end I was pleasantly surprised at most of the events in “Barn Mates”…and while I can’t wait to see what’s up with this Ruby, I also can’t wait to see more of Lapis and Peridot’s interactions. Here’s hoping that all of that – and maybe more – is featured in next week’s episode!

TOPICS in too deepSteven Universe