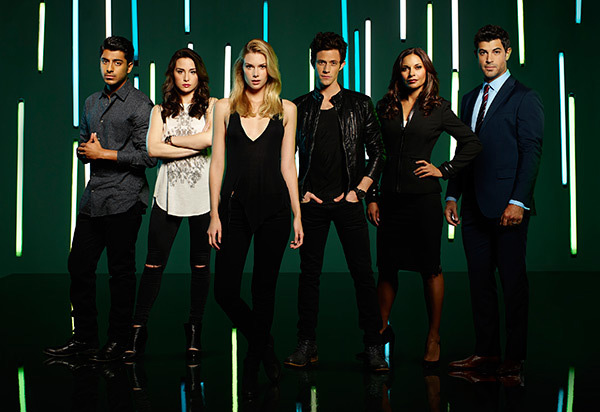 The season 2 finale of Stitchers aired Tuesday night. Freeform (the network formerly known as ABC Family) hasn’t issued a decision about renewal for season 3 yet. In the meantime, fans have taken to Twitter with a campaign to support the show.

Stitchers is about a team of scientists and geeks who solve crimes using a technology that allows former grad student Kirsten Clark (Emma Ishta) to virtually enter the minds of the deceased (known as “stitching,” hence the show title). Camille (Allison Scagliotti, who fans will know from Warehouse 13), Cameron (Kyle Harris), and Linus (Ritesh Rajan) all come from different technology and science backgrounds. They work together to guide Kirsten through the stitches using their own innate skills—resourcefulness, analytical ability, problem-solving—and computer science. Their boss, Maggie (Salli Richardson-Whitfield, who played Allison Blake on Eureka), is with the NSA. Rounding out the team is a cop, Detective Fisher (Damon Dayoub). 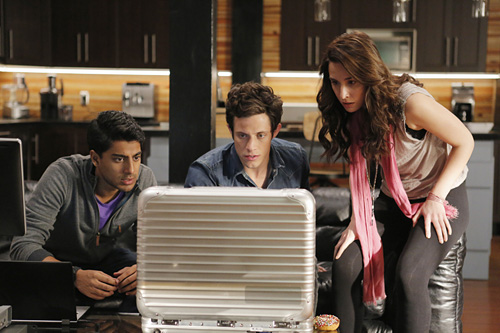 Ritesh Rajan, Kyle Harris, and Allison Scagliotti in “Stitchers” — the geeks are the heroes

The show combines elements of a procedural—each week, there’s a murder to solve—with a genre science fiction show, as the group tests the limits of the tech they work with. There’s a complex underlying personal mythology involving Kirsten’s father, who invented stitching, and each main character in the ensemble has their own history, secrets, family troubles, and personal dramas. What makes Stitchers stand out is the rapport of the team and Maggie, and the blend of humor and drama.

The other key stand-out factor is that the heroes are fully fleshed-out, smart-mouthed science geeks. They dig comic books and make pop-culture references, but rather than falling into the stereotype of what television often seems to think geeks are like, these are complex characters. Anyone who has a science geek or genre fan in their lives will find the characters recognizable. The cast of characters is diverse, featuring both women and people of color in the sciences, and one of the main characters was recently revealed as bi. All the characters struggle believably with their emotional lives and scars (some literal). Female relationships are also well developed. Often genre shows will understand the need for strong female leads, but skimp too much on the bonds between female characters; Stitchers is not one of them.

While a fan campaign has no guarantee of saving a show, it certainly helps when fans can demonstrate a strong social media presence and fan support online.

The show’s creator, Jeffrey Schechter, the writing team, and cast are also very active on Twitter. Schechter has been engaging with fans, retweeting fan tweets and encouraging the campaign. He recently linked to a video fans created to show their support:

Check out this great fan video. Let's get the views to 1K by end of Wed. Totally doable. https://t.co/0S50Ym4L7R #StitchersChat #Stitchers

He has also been encouraging fans to rewatch the season finale on a variety of platforms.

Before next Mon watch and rewatch S2 finale on @FreeformTV app, @hulu or https://t.co/drfif9iBwD. THIS HELPS GET S3! #Stitchers @StitchersTV

The show has been trending on Twitter and Tumblr.

Thank you #StitchersFans from the bottom of my heart for your love this season.

Last month, fans put a petition on petitionbuzz.com which has gathered 6,398 signatures as of the writing of this post, exceeding their goal of 5,000.

Some genre fans may have overlooked Stitchers. Freeform is a smaller network, and the show (and network) is marketed primarily to younger viewers. However, a genre show with a smart, diverse cast of characters, where science geeks, people of color, and women in science and law enforcement all get to be the heroes, is definitely worth a second look. Stitchers fandom is also reflective of how increasingly important fan voices have become. Networks look beyond Nielsen TV set ratings to make decisions about a show’s long-term viability. They also look more often at live+7 data, delayed viewing on DVRs, an area where Stitchers shows major gains—138% for the week of April 18-April 24, 2016, in viewership percent. (Data source: TV-Recaps-Reviews).

The campaign to support Stitchers demonstrates one of the many ways fans talk back to and engage with the media they intake, rather than passively absorbing it, something that will happen more and more as engagement between fans and those who create our media evolves.