With less than two months to go until geeks worldwide converge on San Diego for the granddaddy of all cons, announcements have started going out regarding the most sought-after of all souvenirs: exclusives.

One of the first waves of SDCC exclusives comes from Mattel, which made a strong showing at this year’s Toy Fair, featuring a variety of toys aimed at young girls. Their SDCC exclusives continue in the same vein, with most of the toys being dolls (including a Wonder Woman Barbie that I must own). All of Mattel’s SDCC exclusives will be available for pre-order on Matty Collector starting June 17 (names and prices are subject to change).

First we have the coveted Wonder Woman Barbie (which Jamie MUST OWN). The Barbie Amazon Princess Wonder Woman will retail for $80USD. Can’t make it to the show? She’ll also be available online. Just look at her outfit. LOOK AT IT. 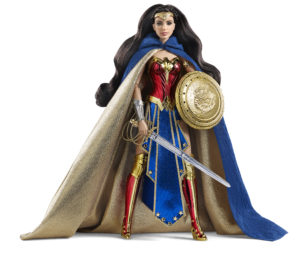 As befitting of the daughter of Zeus, Wonder Woman makes her first silver screen appearance in Batman v Superman: Dawn of Justice and this iconic Super Hero proves she’s ready for battle! Inspired by the costume worn in the movie, Wonder Woman Barbie doll is cloaked in a royal blue hooded cape lined with gold lamé and worn over her bold red bustier and royal blue paneled skirt. She also wears her signature golden headdress, bulletproof bracelets and golden lasso. Standing heroically atop a “rocky” ledge brandishing her sword and shield, she is the portrait of a true Amazonian Warrior Princess.

The Monster High Ghostbusters Frankie Stein doll mashes up Mattel’s “Monster High” line with the upcoming Ghostbusters reboot. Frankie retails for $25USD and, like Wonder Woman, will be available online.

Frankie Stein straps on her proton pack and GhostbusterTM skills in this spooktacular SDCC ’16 exclusive mash-up. Catch yours before it gets slimed!

Next up we have a two-pack of Monster High dolls, featuring Robecca Steam and her father Hexiciah, which will sell for $40USD. These two are an on-site exclusive, so you must have an SDCC badge to pick them up (or a really good friend who doesn’t mind waiting in line)!

Get ready for this riveting steampunk two-pack from Monster High! Robecca Steam and her father Hexiciah Steam bring their analog style to the digital age in with their uhhh-mazingly detailed steampunk fashions and scary cool accessories. 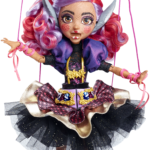 Another online exclusive is this marionette — Cedar Wood, from Mattel’s “Ever After High” line of dolls — which will cost $30USD.

The stage is set for this year’s truly captivating Ever After High SDCC ’16 exclusive.

Mattel’s last doll exclusive is another one that I’m super excited about — this She-Ra doll! Oh, my childhood. So many memories associated with this lady. She-Ra will cost $75USD and is a Super7 exclusive.

Relive the glamorous, commanding adventures of She-Ra, Princess of Power with this 11” highly detailed action figure. The Most Powerful Woman in the Universe features 24 points of articulation, rooted hair, 3 iconic fashions, 2 swords, signature shield, 6 interchangeable hands, a logoed stand, a 12-page mini comic: “The Story of She-Ra”, and a beautiful keepsake box with vivid imagery from the enchanting world of Eternia! Wage epic battle with She-Ra against The Evil Horde for the honor of Grayskull!

Frankie Stein isn’t the only Ghostbusters-themed exclusive Mattel is offering at this year’s SDCC. Check out this amazing Ghostbusters Lights & Sound Multi-Pack! This playset is an on-site exclusive and will cost $24.99USD.

Ghostbusters is back with an all new, paranormal team and spooky cool ghosts. Now with the GHOSTBUSTERS Lights & Sounds Multi-Pack, you can join the fight. Battle alongside four 1.5” ghost busters mini figures who are armed and ready! Proton beams fire from their blasters as they try to take down the evil 6” Rowan figure, the giant ghost from the film. Press the button outside the box to launch a light and sound show of blue glowing proton beams as Rowan turns red and screams in rage! Press it again, and you’ll hear the iconic “Who you gonna call” Ghostbusters theme song as the lights bounce to the beat of the music. Packaging features slime graphics and the iconic Ghostbusters logo. Set also includes 3 AA batteries. It’s a multi-sensory interactive experience that real Ghostbusters fans and collectors will love!

What do you guys think of Mattel’s SDCC exclusives? Are there any that you’re dying to have?