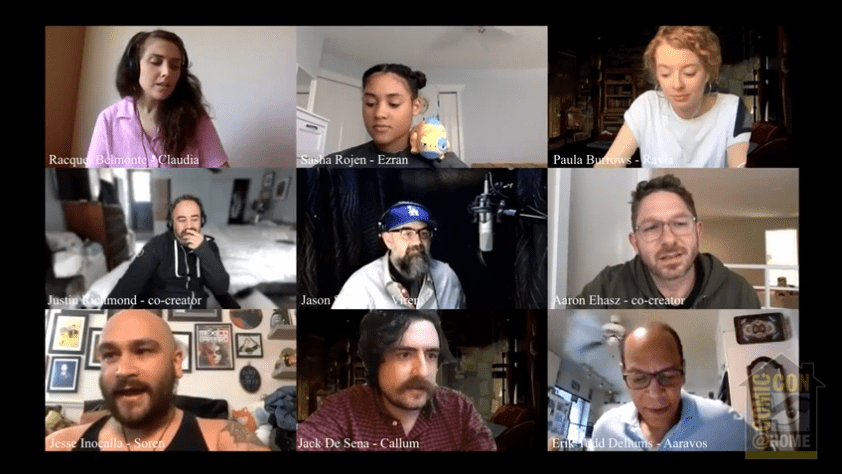 If you saw our pre-SDCC webcast, you’ll know that out of all the panels on the Comic-Con@Home schedule, I was most excited for The Dragon Prince panel. This is because, due to conflicts, I’ve never been able to make it into the room to see the panel in person. And what a great first panel to see! If you missed it or don’t have time to watch it, don’t you worry. I’ve got the highlights.

Well, the biggest news out of The Dragon Prince panel is undoubtedly the response to the oft-asked question, “Will there be a season 4?” And the answer to that question surprised everyone, even the cast. Co-creator Aaron Ehasz revealed that Netflix has picked up the entirety of The Dragon Prince saga! That means that, no matter how many seasons it takes to tell the story, we’ll get to see all of it. No cliffhanger endings for us!

Of course, they weren’t clear on just how many seasons there are still to come (though I’ve heard it will be at least seven total), nor did we get a firm date on when season 4 will premiere. But just knowing that we won’t be left in the lurch with a sudden cancellation and that we’ll get to see the entire story play out as intended makes me very happy. And watching the cast get the news was one of the most genuine moments of pure joy I think I’ve ever seen at a panel. 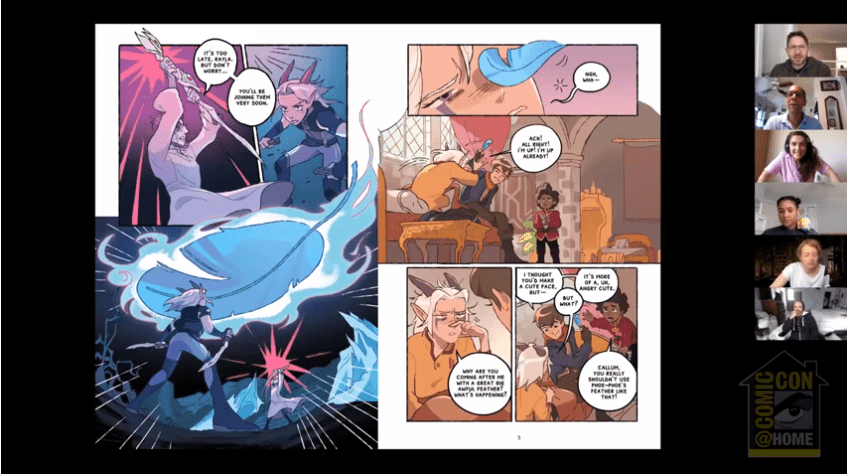 The cast previews the upcoming graphic novel, Through the Moon, by doing a live read.

Other news out of the panel was that a new graphic novel, Through the Moon, will be published by Scholastic on October 6, 2020. This is a canon story – that was emphasized heavily by Ehasz – that is set after the events of season 3. (The cast gave us a small preview by doing a “live” read of the first few pages of the book.) This will pair nicely with the previously-announced art book, which is set to be published August 18.

There will also be a tabletop RPG from Fandom Tabletop, the trailer for which they premiered on the panel. Tales of Xadia will be out sometime in 2021, and you can sign up for updates at the website. The lead-up to this announcement was an in-character skit from the voice actors in which they played a game of Dungeons & Dragons, with Aaravos as the Dungeon Master.

The entire panel includes another skit (the characters all in quarantine, trying to do a voice chat) as well as some fan Q&A (fans were encouraged to submit their questions in advance on the show’s various social media platforms), and at just under 40 minutes is well worth a watch, if you have the time.