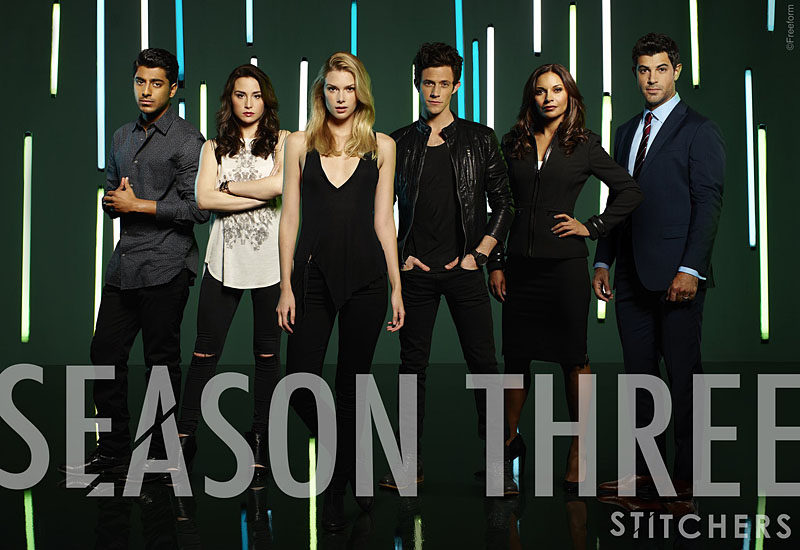 Great news for fans of Stitchers! After an anxious wait, the Freeform network has finally announced renewal for Season 3.

With a touch of crime-fighting procedural, science-fiction, and drama, Stitchers is about a team of scientists who join forces with law-enforcement in a secret government program. Kirsten Clark (Emma Ishta) can “stitch” into the memories of the recently deceased to solve murders. The series in particular spotlights women in STEM and law enforcement, and the heroes are geeks. It also features a diverse cast, with a mix of humor, science stuff, and crime-solving.

From the Freeform press release:

“’Stitchers’’ passionate fanbase has been vocal about wanting to see more of this show, and we listened,” said Burke. “’Stitchers’ has proven itself a consistently strong performer, and we’re proud of the fact that it celebrates #smartgirls everywhere.”

Highly intelligent and persistent, Kirsten Clark has an aptitude for technology but never expected that she’d be hacking into the minds of the recently deceased. Recruited into a covert government agency to be ‘stitched’ into the memories of the dead, Kirsten and the Stitchers team investigate murders and decipher mysteries that otherwise would have gone to the grave. Working alongside Kirsten is Cameron, a brilliant neuroscientist whose passion for the program is evident in his work, and Linus, an earnest engineer and communications technician. The secret agency is headed by Maggie, a skilled veteran of covert operations who closely guards the deeper purpose of the Stitchers program. Kirsten’s roommate, Camille, a gifted computer science grad student, is also recruited to use her skills to assist Kirsten in her role as a “stitcher,” as well as LAPD Detective Fisher, who provides back-up and support for the team.

Kyle Harris and Emma Ishta made the announcement on Facebook live and thanked fans. According to Harris, Season 3 will be 10 episodes.

Showrunner Jeffrey Schechter took to twitter to show his gratitude to fans for their support, along with writer April Fitzsimmons, and members of the cast:

Season 3 is directly because of our amazing fans. Thanks to all of you for sticking with us! And thanks to @FreeformTV for being awesome!

Thank you to our fans. We love you and owe you everything, tag all your friends and spread the word! <3 #stitchers #freeform #season3 pic.twitter.com/SJ9Su1lb3R

The Geekiary recently did a write up on the fan campaign to get Stitchers renewed. In an era where Nielsen is measuring twitter ratings and networks and shows are looking beyond the traditional “overnights” as a way to gauge audience, fan enthusiasm and social media support plays an increasingly important role. Fans have a voice, and showrunners and networks are listening.

Are you excited about the Stitchers renewal? Is there any character in particular who’s become your favorite? Let us know in the comments.

Previous:American Gods Comic to be Published in 2017