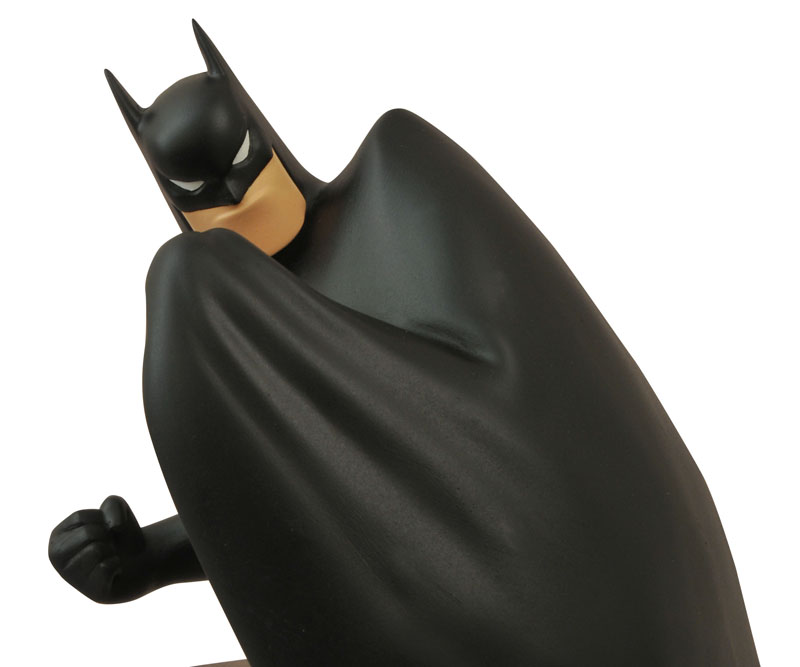 San Diego Comic Con is getting closer and closer, and more producers of action figures and tie-in merchandise are announcing their SDCC exclusives. If you’ve been feeling nostalgic for Batman: The Animated Series, you might be especially interested in this round-up of exclusives from Diamond Select Toys.

Batman: The Animated Series debuted in 1992 and set off a whole string of successful animated shows set in the DC Universe. It introduced the “Dark Deco” animation style, with a stylized film noir feel that fit the Batman and his world.

The first few items in our round-up of offerings for animated Batman will be available only at the Diamond Select Toys booth (#2607).

In keeping with that “Dark Deco” style, Diamond Select Toys introduces a black & white bust of the Joker from the classic episode “Almost Got ‘Im.” 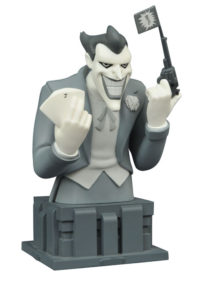 SDCC 2016 BATMAN: THE ANIMATED SERIES “ALMOST GOT ‘IM” B&W JOKER BUST
The “Almost Got ‘Im” sub-series concludes with this exclusive black-and-white resin bust of The Joker, as seen in the classic episode of Batman: The Animated Series! Measuring approximately 6 inches tall, the Clown Prince of Crime wields a deck of cards and a toy pistol atop a pedestal inspired by the iconic show’s art-deco architecture. Packaged in a full-color box with a certificate of authenticity. Sculpted by Varner Studios!
$60, Limited to 750 pieces

There’s also a bust of Batman from a segment of the episode “Legends of the Dark Knight,” which featured a variety of animation styles that paid homage to different eras of Batman in comics history. 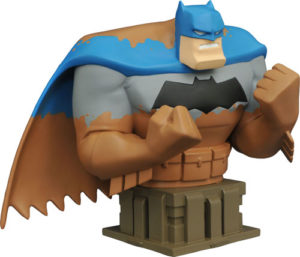 SDCC 2016 BATMAN: THE ANIMATED SERIES MUDDY DARK KNIGHT BUST
“This isn’t a trash heap, this is an operating table!” This exclusive muddy version of “Dark Knight” Batman is based on his appearance in the famous Batman: The Animated Series episode “Legends of the Dark Knight,” when he takes on the leader of a gang of mutants. Measuring over 6 inches tall, he is ready to fight atop a pedestal inspired by the iconic show’s art-deco architecture. Packaged in a full-color box with a certificate of authenticity. Sculpted by Varner Studios!
$60, Limited to 1,350 pieces

Batman: The Animated Series also introduced the beloved character Harley Quinn into the DC Universe. She proved so popular she was eventually integrated into the world of the comics, and she’s a lead in the upcoming live-action Suicide Squad movie. Harley’s relationship with the Joker was often disturbing as well as heartbreaking, along with the particular brand of goofy yet dark humor that surrounded the characters. DST has a new Harley Quinn statue inspired by the episode “Mad Love” that should interest Harley Quinn fans new and old.

SDCC 2016 BATMAN ANIMATED PREMIER COLLECTION “MAD LOVE” HARLEY QUINN GEM EDITION STATUE
Diamonds are a girl’s best friend! The psychologist once known as Harleen Quinzel may have the hots for The Joker, but the Clown Prince of Crime doesn’t always realize what he’s got! This exclusive 12” resin statue of Harley Quinn is based on her look in the classic New Batman Adventures episode “Mad Love,” and depicts a dolled-up Harley wielding her mallet and pistol. But this limited edition adds a little incentive for the Joker, with added harlequin patterning on Harley’s nightie as well as inset diamonds and rubies! Packaged with a certificate of authenticity in a full-color box, Harley Quinn just got a lot more irresistible! Sculpted by Clayburn Moore!
$200, Limited to 200 pieces

The final two items in our Animated Batman round-up will be available both at the Diamond Select Toys booth and at various retailers on the SDCC floor.

Fitting with the black and white bust of the Joker, DST also has a black & white Batman figure from “Almost Got ‘Im.” This statue really captures the feel of the animated series. 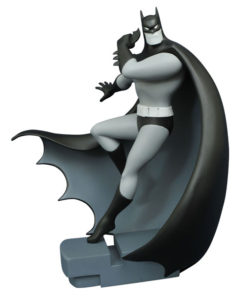 SDCC 2016 DC GALLERY: BATMAN: THE ANIMATED SERIES BLACK & WHITE “ALMOST GOT ‘IM” BATMAN FIGURE
He is vengeance! He is the night! He is Batman! Based on his appearance in Batman: The Animated Series episode “Almost Got ‘Im,” this exclusive 9-inch scale PVC figure of Batman captures him in a monochromatic color scheme, alighting on a rooftop with a Batarang at the ready. Sculpted with a high level of detail and featuring exacting paint applications, Batman is in scale to all Femme Fatales and Gallery PVC figures. Packaged in a full-color window box. Sculpted by Varner Studios!
$45, Limited to 2,000 pieces

Last but not least, this bust representing the logo for Batman: The Animated Series also feels like it leapt right from an animation cel. 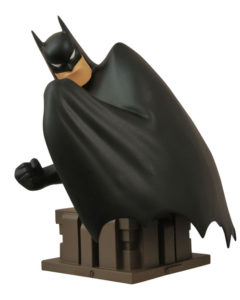 SDCC 2016 BATMAN: THE ANIMATED SERIES BATMAN LOGO BUST
Batman returns in this all-new exclusive 6” resin bust inspired by the famous logo of Batman: The Animated Series! Drawing his cape around him, the Dark Knight lurks in the shadows while posing atop a pedestal inspired by the iconic show’s art-deco architecture. Packaged in a full-color box with a certificate of authenticity. Sculpted by Varner Studios!
$60, Limited to 1,000 pieces

Which exclusive are you most excited to get your hands on? Any episodes or scenes you hope to see a statue for? Feel free to discuss in the comments.

Previous:PositiviTEA Tuesday with The Geekiary (7/5/16)