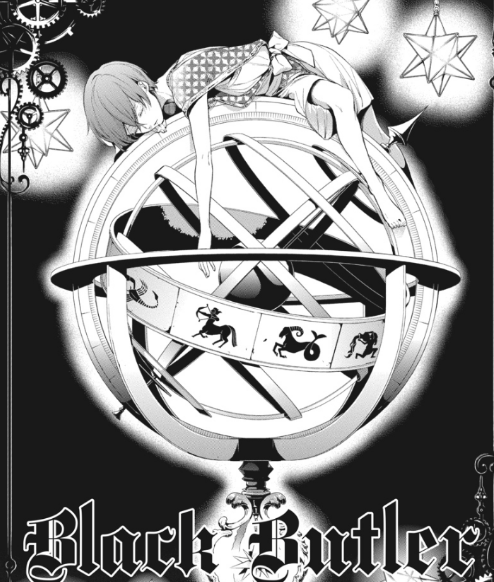 Black Butler 114: The Butler, Assaulting was basically wall to wall fangirl fodder.  And you know what? That’s fine. It’s all fine. 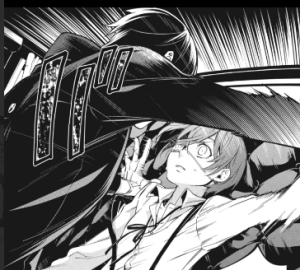 The chapter began with Ciel and Sebastian regrouping after their independent investigations and exchanging information.  Mere moments after they’ve boarded their taxi and left the scene, Sebastian smells blood and Ciel.  He immediately pins him to the wall of the carriage as he looks for the offending injury.  Everything that happened in that scene is canon, folks.  Have it it shippers.  It’s a goldmine for shippers and a large part of me thinks Yana Tobosa is aware of that.  She’s certainly fed into it before and she no doubt will again.

After finding the source of the injury – a small dot that appears to be an injection point – he carries him bridal style to Lady Sullivan’s manner.  Because it’s perfectly normal to carry one’s master bridal style in Victoria England, obviously.  I mean yes, of course, it’s more convenient for him to do this to get Ciel places faster, but they’ve been caught repeatedly doing this when there wasn’t really a need to do so.  And again, do you hear that?  It’s the sound of me not complaining at all about this.  Really.  It’s fine.  Keep it going Yana Tobosa.  You have us wrapped around your finger and you clearly know it.

But moving past the shipper goggles for a bit, one of the best parts of this chapter was the return of Lady Sullivan!  She was an incredibly unique character from so many chapters ago that I honestly didn’t think we’d see again.  And when Lady Sullivan is around, we get incredible dialogue like this: 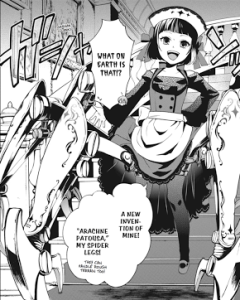 Thanks to Lady Sullivan’s medical know-how (and some thinky thoughts from Wolfram), we are able to theorize that Ciel may not have actually been injected with something, but could have actually had his blood drawn (hence the put in/pulled out conversation quoted above).  To what end? They don’t know.  We don’t know.  Getting to the end of this mystery is certainly taking some time, but I’m excited to get there.  Especially if we have more chapters like this.  I admit it that I love when the series plays into my interests so thoroughly.

To cap off this fangirl-icious chapter, we got some Grell.  I’m not exactly in the Grell fanclub myself, but I know the eccentric red headed reaper has quite a following.  We also got a new reaper named “Othello,” who indicates he hasn’t been to earth in quite some time.  If the reapers are calling in back up, something bad is about to go down.  Or… maybe Grell has just run off all the other reapers and we’ve reached the bottom of the barrel?  It could go either way, honestly.  But my senses tell me things are going to get ugly real fast.

I can get meta about the cover image for the chapter and pick apart all the star symbolism all I want, but the truth is I really have no idea where this is going.  I waffle back and forth about Ciel possibly playing a special roll in all of this, and him just getting lucky with his star sign and being another cult follower in the eyes of the group.  I have no idea.  But I’m certainly excited to find out.