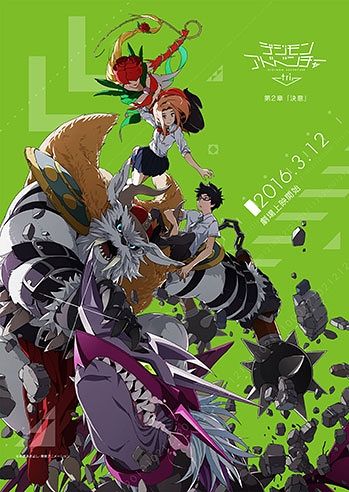 The second film in the Digimon Adventure tri series, ‘Ketsui’, shone light on two characters from the original series and also set up things for the future.

While Tai and Yamato were the two main male leads in Digimon Adventures and Saikai, it is good to see that the current film series is also focusing on developing the rest of the DigiDestined. ‘Ketsui’ was all about Mimi Tachikawa and Jo Kido. We got to see how they have changed over the years and the insecurities they still feel.

Mimi and Jo have very different personalities from each other. Mimi speaks her mind while Jo likes to stay quiet. They don’t think there’s anything wrong with the way they behave until they are forced to accept the truth. I’m going to talk about Mimi first and then get to Jo.

Mimi’s outspoken personality makes people around her feel uncomfortable. She puts up a brave front and acts as if she doesn’t care but she does. She’s a good person and making people feel uncomfortable because of her actions has never been her intention. She wants what she thinks will be best for everyone else and that doesn’t always work in her favor. Even though Koushiro told her to stay away, she insisted on fighting an infected Ogremon, which led to doing more harm than good.

Coming to Jo, ever since the start of Digimon Adventure tri, he has been feeling reluctant to rejoin his friends. He’s the oldest in the group and thus has more grownup responsibilities. Trying to do well in exams and exceeding in life makes saving the world take a backseat. However, it is made clear that Jo doesn’t want to stay away from his duties as a DigiDestined. He just can’t find the right answer to why they have to follow their destiny. Why can’t they choose their own path in life?

While Mimi and Jo shared a little heart-to-heart and talked about their troubles, it was Hikari who helped Jo. She made him understand that he doesn’t need a reason to be with his Digimon partner Gomamon. I was happy to see Jo finally rejoining the other DigiDestined.

Understanding their flaws and trying to become better is what made Mimi and Jo strengthen their bonds with their Digimon partners. This led to both Palmon and Gomamon attaining their Mega forms. Seeing them evolve into their powerful forms was exciting during their non-stop battle sequence with Imperialdramon.

The plot also progressed a lot during ‘Ketsui’, and we got a lot of answers relating to the mystery behind the infected Digimon. Ken, one of the characters from the second generation of DigiDestined, played a huge role in the current movie. While I’m not a fan of the second generation, I’m looking forward to knowing more about their fates.

Meiko’s partner Meikuumon turned out to be the Digimon that evil forces were after. I wasn’t expecting Himekawa to be the one who enabled Meikuumon to get kidnapped in the first place, but I guess she is the type of character who will do anything to keep the human world safe.

With Mimi and Jo’s partners finally obtaining their Mega forms, it is now certain that we will get to see the rest of the DigiDestined achieve it, too – other than Tai and Yamato who already have.

The next film in the series has been titled ‘Kokuhaku’ (Confession) and is scheduled for a summer release this year.

Have you watched Digimon Adventure tri ‘Ketsui’ yet? What did you think of the new Mega forms? Let us know!