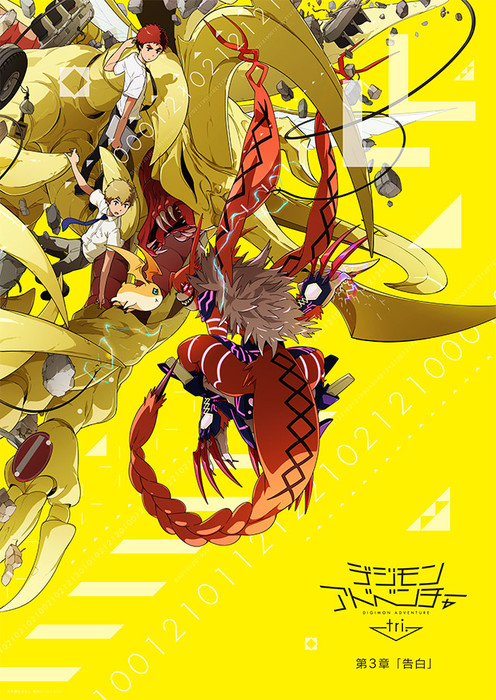 While we still have to wait a few months for the release of the third film, titled Kokuhaku (Confession), in the Digimon Adventure tri series, the visual has been provided to fans with hints about what they can expect from the plot.

The official Digimon Adventure tri twitter revealed the visual, and it looks just as good as the one released for Ketsui. The second film in the six-part series focused on Mimi and Jo. It was very enjoyable and I liked that the writers focused on two characters that didn’t get much time to shine during the anime.

If you look at the visual for Kokuhaku, you can tell that the third installment in the series is going to focus on Koushiro Izumi and Takeru Takaishi. The visual also shows HerculesKabuterimon, which is the Mega form of Izumi’s Digimon partner Tentomon. Both Mimi and Jo’s Digimons attained their Mega forms during Ketsui, so it makes sense that the rest of the DigiDestined also start digivolving their partners to powerful levels. The visual also shows Takeru’s Digimon partner Patamon in Rookie form. Will Patamon not obtain a Mega form during the movie?

Takeru and Patamon are my favorite characters from the series. All of Patamon’s Digievolutions are powerful and occur whenever the DigiDestined are facing a very powerful threat. That is why even if Patamon doesn’t turn Mega during Kokuhaku, you can be sure it’ll occur during future installments when the rest of the DigiDestined are in grave danger.

The visual also shows an infected Meicoomon who seems to be trying to infect Izumi’s Digimon partner. There’s also a possibility that Patamon might use secret Holy Power to negate the effects of the infection.

Kokuhaku will be released in Japan on 24th of September. And while that’s still a couple of months away, I’m definitely looking forward to it.

Have you started watching the Digimon Adventure tri film series yet? Let us know!