My Black Butler fangirling heart was massively consumed by the tidbits about the movie that came out earlier this week (to be released in 2017!), but we also got a new chapter in the ongoing cult plot in the manga.

The 113th chapter, ‘The Butler, Independent,’ continues to follow Sebastian and Ciel as they attempt to infiltrate the mysterious star cult that’s taken over a large percentage of the London populace.  The cult seems to cross class barriers, use strange star symbolism, brings back our Weston arc boys as some sort of Victorian era popstars, and seems to have an actual psychic as a figurehead.   It’s all very bizarre, but our dynamic demonic duo is on the case…. separately.  I suppose this is a great opportunity to once more put Ciel in danger and have Sebastian come to the rescue, but it may not play out how it usually does this time.  I don’t know why I feel that way, but my gut is telling me Sebastian isn’t going to be the one to save the day.

Ciel was going it alone in this chapter, using his rare Sirius star trinket to gain entry into an exclusive event.  The ‘Starlight Four’ performed in a planetarium type setting, but Ciel was decidedly not amused at the display.  Before he could snap out a witty retort, the room fills with some sort of toxin that knocks him out.  Our ferociously independent Ciel doesn’t call for Sebastian, of course, and is asleep and vulnerable for pretty much the entire chapter after this incident.  Poor Ciel.  Kid just can’t catch a break.

Sebastian, keenly aware of his master’s every state, senses the unusual event, but chooses to stay outside and continue playing with a street cat unless Ciel summons him.  How he’s supposed to do this when he’s unconscious I’m not sure.  But hey, Sebastian is a demon after all, and as much as I’d like for him to set down the cat and run to Ciel’s side, that’s not really his nature.  If Ciel were in mortal danger, he’d go (and make a flashy display of it too), but he’s been known to let Ciel get knocked around a bit before he barges in and saves the day.  And honestly, Ciel kind of encourages that kind of behavior with his sarcastic quips and constant striving for independence.  The push and pull between them is why I think their dynamic works so well.  This might also be why I sense this chapter may go a different route.  They’ve been playing up their independence from each other so much this chapter, it has to pay out somehow. 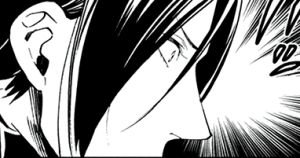 Even though Sebastian was kind of a dick about Ciel being passed out and vulnerable somewhere (again, he’s a demon, guys, so let’s not act surprised), the fact that he felt the conscious state Ciel was in still made my heart squee.  I want that single frame tattooed on my forehead just so I can squee about it every damn day okay?  He feels him.  They are connected.

But okay, let me bottle up my fangirl squee for a second and get back to what’s going on in this chapter.  I promise I’ll contain myself.

Leaving Sebastian outside the main event gives him a perfect opportunity to run into Inspector Abberline.  Through some rather clunky exposition (all comics have occasional bouts of clunky exposition so this isn’t really a criticism) we learn that corpses have been cropping up all across the city.  The victims have nothing in common except for how they died, much like how the cult members have nothing in common except for the fact they are in some wacky star cult.  The obvious take away is that they are most likely connected somehow.

The kicker of the entire chapter, though, is that Lizzie seems to be aware of the danger that’s surrounding them more than she’s previously let on.  Her scene is brief and vague, but she’s seen standing over Ciel as he sleeps, mourning the fact that she’s unable to save him.  I knew my girl Lizzie was too smart to be entirely suckered in by this cult.  I am slightly disappointed that she isn’t kicking ass and taking names with her badass sword skills, but hey, I’ll take this little tidbit over her being a helpless damsel in distress any day.  Reducing her to a helpless cliché would have destroyed the chapter for me, so I’m relieved they didn’t do that.  Thank you, Yana.  You are fabulous.

Violet also doesn’t seem too enthused with being forced to perform for the wacky star cult.  Honestly, Violet was the only Weston arc person I cared about, so hey that’s something.  If we’re going to bring these boys back, at least do something interesting with my favorite.  But really, I’m getting tired of the musical numbers.  Let’s move on from Victorian era 1D okay?  It makes me want “THE PHOENIX” back.  At least that made me giggle every single time.  I think this may have to do with the fact that it’s hard to convey music through comic format, so in my head they are just kind of speaking these songs like some sort of awkward word art.  It’s like an awful poetry slam in my head and it’s getting sort of weird.  If I were musically inclined I might not be getting so annoyed.

Ciel wakes up from his weird coma-like sleep without realizing anything is amiss, so it appears our mystery will keep chugging along for a few more chapters at least.  Meanwhile, Sebastian ends the chapter after discovering a mass burial site, so that’s certainly going to lead somewhere interesting.  While this chapter didn’t have as many amazing moments as the past few, it still felt very much vital to the ongoing plot.  It was very much an info dump, and sometimes writers just have to do it to get the ball rolling.  Ciel in a toga and Sebastian accepting the fact that his master is sort of passed out somewhere and opting to continue playing with an alley cat were pretty much the most amusing parts of the entire chapter.  Lizzie’s self awareness and Sebastian’s obvious psychic connection to Ciel were also treats.  But the rest was just plot being thrown at us.  But hey, that’s okay sometimes.  The ongoing story needed a push and now we got it.  I can’t wait to see what happens next and that’s the important part.

Previous:Supernatural 11×14 Review: The Vessel
Next: Funko Continues to Put the “Pop!” in Pop Culture