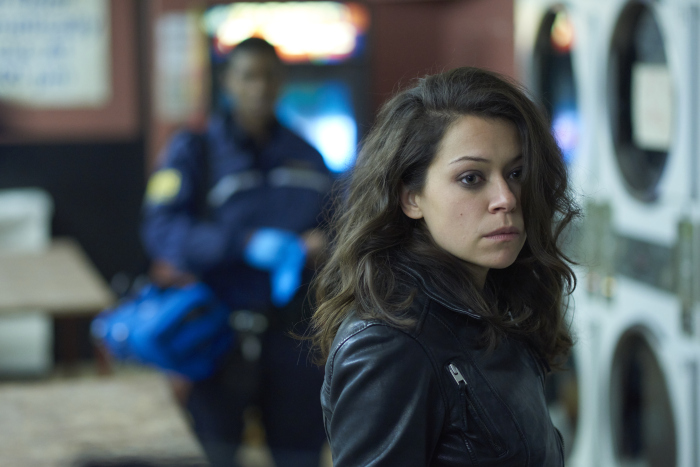 When Orphan Black returns to BBC America on Thursday April 14,  it will bring a little extra for the Clone Club in the form of a weekly after show called After the Black.

Similar to AMC’s Talking Dead – a kind of post mortem for The Walking Dead – After the Black will include interviews, behind-the-scenes footage, and exclusive sneak peeks of future episodes. It’s kind of like the television version of DVD extras. Each episode will be 30 minutes long and will play – as the title suggests – after each episode of Orphan Black.

After the Black will be hosted by Ajay Fry, Morgan Hoffman and Teddy Wilson – best known for the pop culture talk show InnerSPACE. The hosts took to Twitter with squee to celebrate the announcement of the show.

“So excited about #AfterTheBlack coming to @BBCAMERICA!” tweeted Ajay Fry. Morgan Hoffman added some emojis to express her hype. It’s pretty clear they’re very excited if Hoffman’s “AHHHH!!!” is anything to go by.

According to Variety, the first guests for the series will be none other than Orphan Black’s multi-talented star Tatiana Maslany (Sarah, Alison, Cosima, Helena, Rachel, Krystal – basically every character ever and she does it without breaking a sweat) and the lovely Kevin Hanchard (Det. Arthur Bell).

After the Black will premiere 11 p.m. ET/PT, following the first episode of Orphan Black’s fourth season.

Season four of Orphan Black picks up with Sarah being forced out of her Icelandic hideaway and back into the action. She links with a mysterious new ally who is connected with Beth, whose death catapulted Sarah into the world of clones way back in season 1.

Check out the official trailer and be sure to tune into the premiere on Thursday April 14.

You can find The Geekiary’s news and reviews on Orphan Black here.