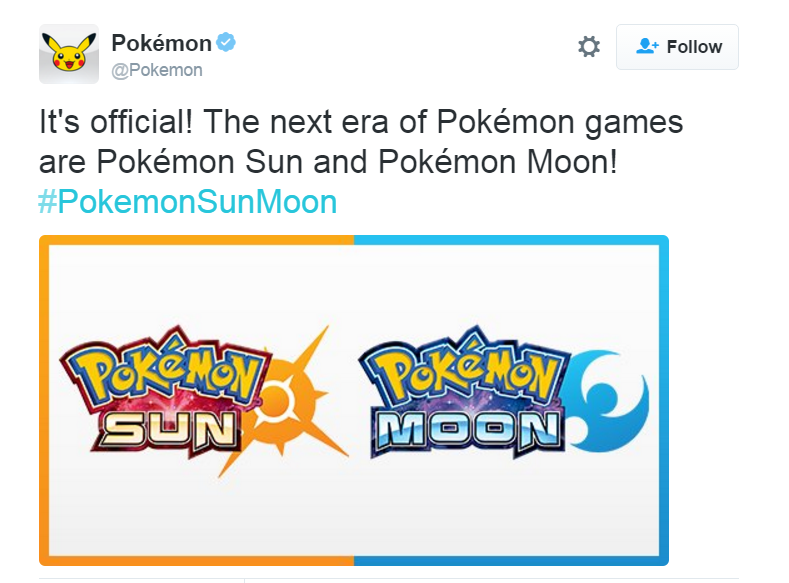 If you have been eagerly waiting for some Pokémon Sun and Moon footage, then you won’t have to wait much longer because a reveal is just around the corner!

According to Serebii.net, fans will get to see the first footage from Pokémon Sun and Pokémon Moon next Sunday on 3rd of April, 2016. The footage will be shown on the Japanese show Gathering at the Pokémon House. The Pokémon anime does preview the variety show, but I never watched it. However, with news about Pokémon Sun and Moon footage being revealed, I might just have to check it out.

Junichi Masuda, director of the Pokémon series, will be present on the show to discuss the upcoming game and also unveil the official footage to fans. Battle director Shigeki Morimoto along with Shigeru Ohmori (director of Omega Ruby and Alpha Sapphire) will also be present.

I’m not sure what the footage will include, but one can make some guesses based on the guests. Having battle director Shigeki Morimoto might mean fans will be shown how the battle mechanics in the upcoming game will work. Sun and Moon might also have some similarities to Ruby and Sapphire with Shigeru Ohmori being present. Keep in mind these are just assumptions at this point.

While trying to predict what kind of game mechanics will be introduced is fun, it is definitely the unveiling of new Pokémon I’m really looking forward to the most. We already got a tease of a new Pokémon and I can’t wait to see all the rest. What kind of legendary Pokémon will Sun and Moon offer players? Will it drastically change gameplay again like Mega Evolution did for X and Y?

It is also not confirmed whether or not the footage will be officially released on the internet. I will try and keep you all updated.

Are you excited to see the first footage from Pokémon Sun and Pokémon Moon? Let us know!

One thought on “Official Pokémon Sun and Moon Footage to be Revealed Next Week!”