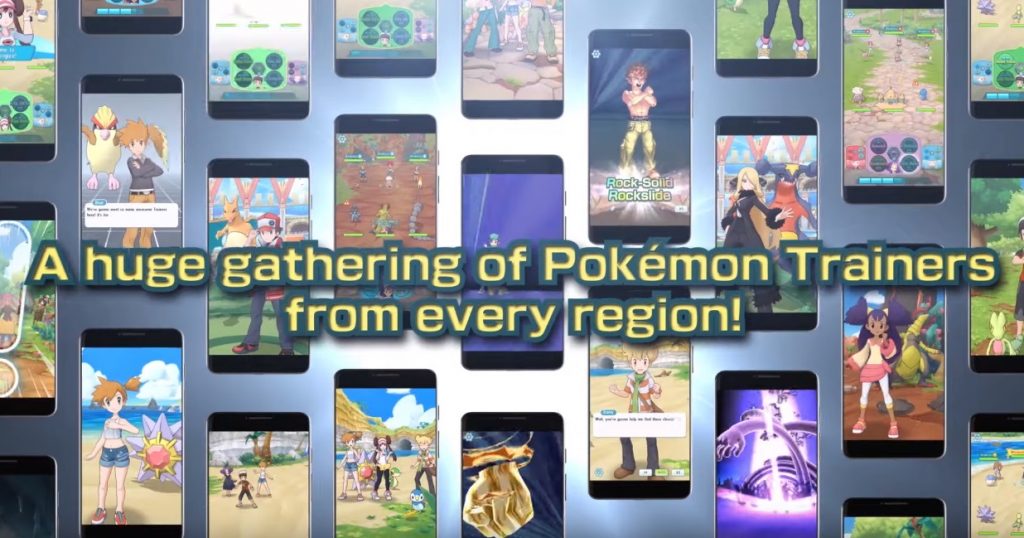 Announced in May, we now have an official trailer for the upcoming Pokemon Masters smartphone game. Players will be able to team up with numerous Pokemon trainers from the long-running franchise this summer.

DeNA’s Pokemon Masters will be playable on iOS and Android devices. A release date hasn’t been confirmed as of writing this.

Two promotional videos have been released, with one showcasing the game while the other includes comments from The Pokemon Company president and CEO Tsunekazu Ishihara, DeNA producer Yū Sasaki as well as some gameplay footage.

This is the video with the comments and gameplay footage!

In the game, players will have to form groups of three Sync Pairs to participate in three-versus-three battles to win badges (and a tournament) in the fictional Pasio. The battles will be in real-time. The gameplay will have players use a move gauge to attack as quickly as possible when the gauge fills.

Misty, Brock, and other trainers paired up with the player will offer support (healing, raising stats, etc.) during battles.

The original idea for Pokemon Masters came from Game Freak’s Ken Sugimori, who suggested a game featuring all the past and present Pokémon trainers in the series.

As a Pokemon fan, I’m excited to play this smartphone game. It will be free with an option to make in-game purchases. I just hope it doesn’t have a pay-to-win model because that will instantly suck out all of the fun.

Also, fingers crossed the Pokemon anime decides to do some sort of adaptation of this project. I wouldn’t mind Ash teaming up with past trainers he has met to win a tournament in Pasio.

Are you looking forward to playing Pokemon Masters? Which trainers will you work with?

Of course, my initial choice is Misty (and perhaps even Iris), but let’s see what happens when this title is released!