Why Misty Is the Best Female Companion from Pokémon! 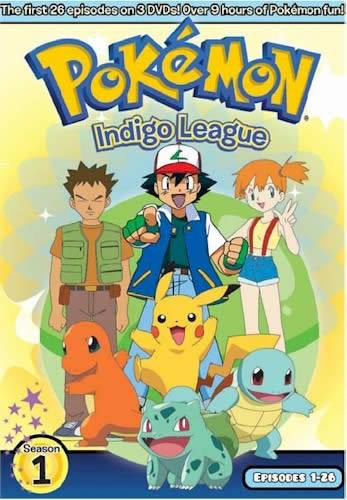 The Pokémon franchise is a behemoth whether you are a fan of it or not. I got introduced to Pokémon through the anime years back, and since then I’ve seen a lot of changes occur, namely the number of female companions with whom the hero Ash Ketchum traveled. While Ash is currently travelling with his fifth new lead female trainer companion, Serena, I still think that Misty, the original female companion, is the best!

Just a short refresher, the chronological order of Ash’s female companions is Misty, May, Dawn, Iris and Serena. I haven’t included Bonnie because she isn’t old enough to become a trainer yet. These young female trainers traveled with Ash at different times during his journey through various regions/generations. Misty is the only female companion as of yet to have traveled with Ash through two generations, namely Generation I and II, and has also appeared in the most number of anime episodes.

The thing I like most about Misty is that she started out as Ash’s rival or equal instead of the mentor-tutor relationship he shared with the other female characters. Misty set out to become the world’s greatest Water Pokémon Trainer, and it was fun seeing her butt heads with Ash during their journey.

I know some fans don’t like Misty because she was bossy and belittled Ash. I get where such fans are coming from, as Misty’s fiery temper is quite obvious during the first series. However, what I like to stress is the reason she acted in a bossy manner. She had an inferiority complex because of her three older sisters. Even though they cared about Misty, her sisters always made fun of her and called her a runt. Misty also had a lot to prove to herself and her sisters. This led her to leave home and become a better trainer. It’s clear from the series that she doesn’t like being told she’s wrong and likes to take control of situations. That’s why she’s bossy towards Ash and they bicker a lot, which is something I haven’t seen Ash and his other female companions do.

This is why I like Misty’s relationship with Ash. They both started out on their journeys together with little to no experience under their belts. As the series continued they both learned to respect each other as trainers and individuals. And while Misty did show her soft side in the first generation series, she became more mature, especially during Master Quest. She still retained her fiery personality but was always there when Ash needed a friend and advice during battles.

Not only that, Misty also worked through her childhood fear of Gyarados. During Cerulean Blues, she protected the Pokémon she feared the most and in the end tamed it. She still has a fear of Bug-type Pokémon, unless they are cute, but I think that has more to do with comedic effect than an important trait of her personality.

A book titled The Japanification of Children’s Popular Culture described Misty’s role in the anime as a mother figure to Ash and Brock. It also called her “unusually ‘complete’ girl of the cartoon world”. Re-watching her role in the anime makes me remember Sakura Haruno from the Naruto franchise because of the way she showed her soft side and her temper when necessary towards the hero.

I do feel that some fans don’t like Misty because of her being a ‘rival’ to Ash. I can understand young boys not liking the female lead being disrespectful towards the hero. She also beat Ash during the Whirl Cup to be placed Top 8 in the international competition. She also beat him during Tour de Alto Mare. Her beating Ash during competitions they both participated in can be a reason some fans grew up disliking her.

Other Girls Came From Her

This is something that I have been noticing for a while now. It is true that when Misty was part of the Pokémon anime there was no concept of Pokémon Contests and Pokémon Showcases. This was a major drawback when it came to giving Misty episodes that solely focused on her and her Pokémon.

May and Dawn were introduced as Pokémon Coordinators and Serena become a Pokémon Performer. Even Iris had numerous tournaments she participated in alongside Ash. Such competitions made sure that the female companions got their time to shine and to give them a separate identity and goal from Ash.

However, I have noticed that whatever the future female companions have done, Misty had already accomplished something similar. May and Dawn participated in Pokémon Contests, which showcased a Pokémon’s appeal relating to appearance and attacks. Serena currently participates in Pokémon Showcases, which showcases both the Pokémon and the ability of its trainer to complete specific tasks together.

Misty did similar things during the anime series in which she was the female lead. She participated in The Annual Beach Beauty and Pokémon Costume Contest in Beauty and the Beach. She dressed up Squirtle and Starmie for the 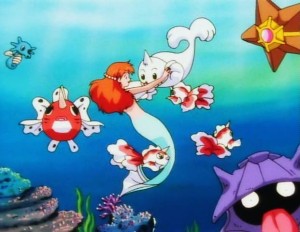 competition. She also participated in and won The Queen of the Princess Festival contest where she battled it out with other female trainers, all wearing a formal traditional Japanese outfit.

Like May and Dawn, Misty also comes from a family of performers. Misty’s three sisters are famous performers known as the Sensational Sisters. Misty herself was shown as more than capable of performing in a play underwater in front of huge crowd during The Misty Mermaid.

The events of these episodes clearly show that Misty has a knack for making herself and her Pokémon look appealing and put up a performance, something that May, Dawn, and Serena did during their respective competitions.

Even Serena’s crush on Ash is something that has already been talked about through Misty in various episodes as well as in the second Pokémon movie. However, contrary to Serena’s feelings for Ash, the hinted crush between Misty and Ash was never made Misty’s driving force as a female character in the anime, and for that I am grateful.

Iris most resembles Misty because she too is destined to be a Gym Leader and wants to become a great trainer specializing in a single Pokémon type. She also has a fiery personality like Misty and treats Ash like a child. She can talk to Dragon-type Pokémon and is proficient when it comes to training them, something that Misty demonstrates with Water-type Pokémon.

In the end, I truly think that compared to the other female companions, Misty is the best. She showcased her skills as a Pokémon trainer and a Gym Leader as the series progressed and did it without having the added advantage of participating in Pokémon Contests and Showcases. She was shown to be ‘equal’ to the main lead, Ash Ketchum, and they both learned from each other to become better trainers.

This is not to say I didn’t enjoy watching the other female companions because I did. But they started off in awe of Ash’s skills as a Pokémon trainer. Misty, on the other hand, was with Ash when he was just starting out and in a sense, paired with Brock, mentored the hero of the Pokémon anime franchise.

What do you think of Misty? What are your opinions about the other female companions in Pokémon? Let us know.