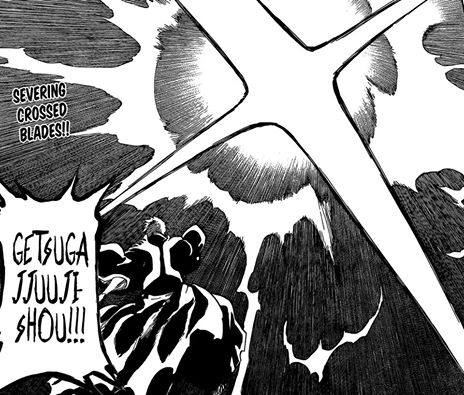 I am certain I’m not the only one who is getting bored with the current events in Bleach. This week’s manga was a complete filler issue. It did nothing to progress the plot and it didn’t even end with an exciting cliffhanger. When will Tite Kubo get back to the story?

It’s not as if I don’t enjoy fight sequences in Bleach. But this one has gone on for far too long now, and the antagonists aren’t even worth the time. The female Sternritters are too weak for Ichigo and I can’t understand why Kubo is wasting his time showing a battle between the main character and a bunch of fodder. The female Sternritters threw their Holy Arrows at Ichigo, and as I predicted last week, the attack did nothing to him. We get it Kubo, Ichigo has grown very strong! Can we please get back to the story?

I  did enjoy the dynamics in the group. Except Sternritter L, the rest of the women were fine with ignoring Ichigo and high-tailing it out of there. However, Sternritter L mentioned that the King will grant them any wish if they succeed in defeating Ichigo, the highest on the War Powers list. Yeah, as if that’s going to happen! The rest of the women agreed to defeat him, and Sternritter L activated her Vollstaendig mode. She launched a powerful attack at Ichigo and he easily countered it with his signature move, Getsuga Tesho. She even went head to head with blades in hand. Her blades were quite interesting. Even though it looked as if she was carrying two blades like Ichigo, in reality she had six. But even that attack did nothing to the hero. Her final attack was a big bolt of lightning called ‘Electrocution’. That’s where Ichigo showed his new ability, Getsuga Jjuuishou. The attack was different from Getsuga Tensho in the sense that he used both his blades and it formed an immense cross of energy. I would have preferred Ichigo showing his powers against more formidable opponents, but alas! Maybe Kubo has more new attacks for Ichigo to show and we’ll get to see them in later issues.

As far as the plot is concerned, nothing happened in this week’s manga issue. Nothing! It felt like a waste of an entire issue. It just showed weak female villains embarrassing themselves during battle. I hope next week’s issue delivers something worthwhile.

What did you think of the issue? Please share your thoughts in the comments section.

Previous:Naruto x 679 Review: She of the Beginning
Next: Amazing X-Men Annual #1 Review