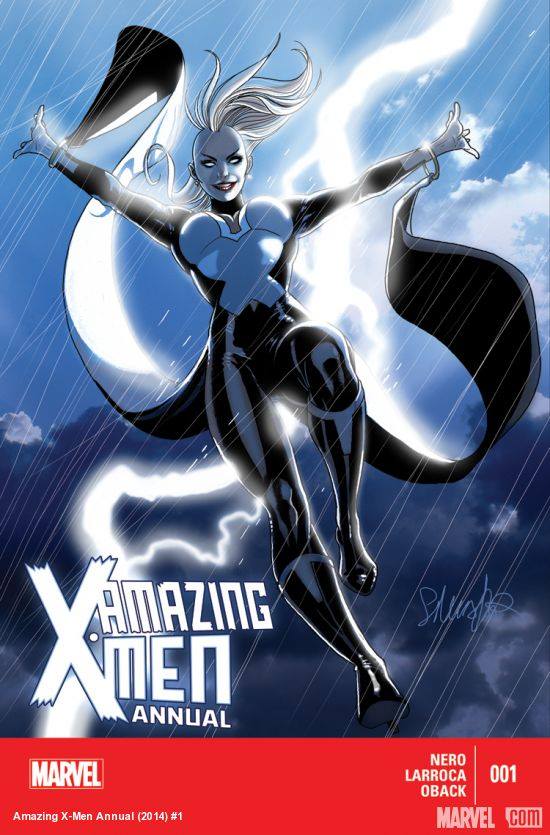 I love the new run of the Amazing X-Men series. It debuted with Nightcrawler coming back from the dead, and the first annual of the series set things up for one of the key characters. The issue put the spotlight back on Storm, one of the most powerful forces in the Marvel Universe, and it made for quite an enjoyable read.

Storm/Ororo Munroe has been many things. She’s been a thief, a Goddess, lost her mutant powers, a leader of the X-Men, a wife, a Queen, and a Headmistress. She’s a complex character and her experiences allow her to relate to every lifestyle. She can look at things from the perspective of a sea urchin as well as a Goddess.

The issue started with a new threat emerging in Africa, named Meruda, an elemental that could control sand, and has access to dark magic, later revealed by Beast as an Inhuman. Sound familiar? Of course it does, Kamala Khan/Ms. Marvel is one too. This new foe had killed a lot of people, and had also taken Storm’s cousin hostage. Ororo Munroe’s family hasn’t been mentioned much in the comics, although I remember seeing some of her relatives in the Civil War storyline back in 2006. She doesn’t want anyone harming her mother’s tribe, and that’s why she keeps quiet about them. Storm has a rich history, and something she did as a child came into play in this issue.

The X-Men flew to Africa to save Storm’s cousin, Abuya. I’m continuing to enjoy the relationship between Wolverine and Storm. Those two have been friends for a long time and they both look out for each other. There was a smile inducing panel in which Storm refused to ask the Black Panther for help. I still can’t understand why Marvel even decided to marry those two, hype them as a major black superhero couple, and then end things in divorce just six years later. Anyway, now she’s with Wolverine and I’m happy. I’ve always shipped those two.

Reaching Africa showed how many different lives Storm has experienced. The tribal people still worshiped her and prayed she would bring rain. The action picked up when Wolverine was able to track Abuya’s location. Knowing it’s an X-Men comic, you can be certain things won’t be easy. And sure enough, Meruda was expecting them, and summoned Gawa, the lord of the undead to kill Storm. Wolverine, Firestar, Iceman, Nightcrawler, and Beast fought Gawa to allow Storm to go after Meruda. 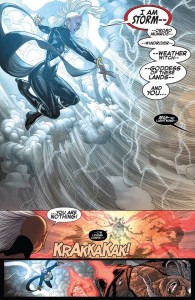 I’ve been waiting a long time for a comic that would show Storm’s primal nature. She and Mother Nature are one and it was amazing to see her go all out against her foe. The story linked back to when Storm was twelve years old and traveled Africa during her spiritual journey. She summoned winds in order to rescue a teenage Black Panther. However, according to Meruda the wind gave rise to a sandstorm that grew stronger and ended up killing all of his family. This revelation took me by surprise. I didn’t know Storm was responsible for killing an entire tribe because of her powers.

The difference between the two elemental wielding characters was shown during the fight, and it gave a better understanding of how Storm’s powers worked. Unlike Meruda, she understood nature, and that lead to her villains defeat.

After the battle, another side of Storm was shown, a gentler side, as she summoned rain, and soothing winds to help the people in need. In the end, it was revealed that Storm wasn’t responsible for killing the tribe at all. Africa has harsh weather, and it was just a coincidence Meruda’s family were caught in a natural disaster; the same day Storm summoned a gust of wind. The annual perfectly set things up for her solo series, Storm, which will debut next month. Knowing the kind of character Storm is I can expect a lot of compassion, fighting for what’s right, ferocious power, and elements of tribal magic.

What did you think of the annual issue? Please feel free to share your thoughts below!