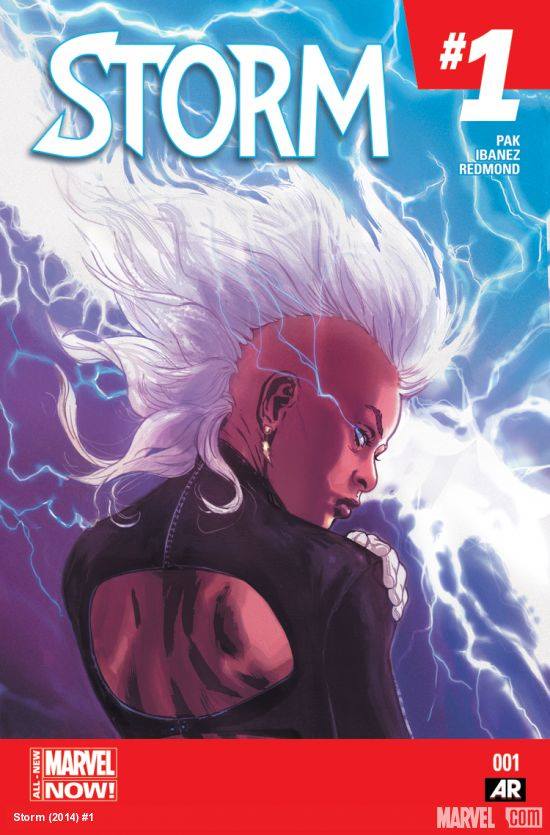 After being in the Marvel Comic Universe for 39 years, Storm finally got her own on-going solo series this week. Written by Greg Pak, Storm #1 is the comic book the fans of the Weather Goddess have been waiting for!

I fell in love with Storm when I started watching X-Men: The Animated Series back in 1998. I didn’t know who the X-Men were, but seeing the white-haired weather controlling female of color had a powerful impact on me. After that there was no looking back and through Storm I was introduced to the massive X-Men universe, as well as other comic book characters in the process. However, none looked as awesome as her, and none still do. Except for Raven from the DC comic book universe, but that’s another story.

It’s quite surprising that even though Storm is one of the most recognizable African-American comic book characters out there, she never had her own solo series. She has had mini-series focusing on her, for example X-Men: Worlds Apart. But ever since her marriage to Black Panther, something has been missing. For me, through the years, writers have pushed Storm down as a character. It wasn’t until Marvel NOW! In 2012, that Storm started to feel like the character I fell in love with.

Astonishing X-Men Annual was a great setup for her new solo series. During Greg Pak’s interview you could tell he’s a fan of Storm and understood her character. That’s exactly what Strom #1 gave the readers. A Weather Goddess who isn’t afraid to take a stand for what she felt was right. I loved her inner-monologues throughout the issue. Her powers weren’t pushed down to make other characters shine. The panels where she took out a tsunami were beautifully drawn. Victor Ibanez does a wonderful job penciling the series. Her Storm is ferocious and kind when she needs to be.

Not only has Greg given the Storm her fans deserve, he also introduced an exciting Mexican mutant girl named Marisol. I liked how the writer used her to tell the readers that not every mutant wants to live at Jean’s Grey School of Higher Learning. Not only that, Marisol ended up being the one that got Storm to question what she’s been doing with her life for quite some time now. I hope Marisol keeps coming back to the series because I like the idea of a young mutant who identifies more with their culture rather than being an X-Man.

Some fans might think Storm acted childishly and allowed her emotions to get the best of her because of Marisol called her a ‘sellout’. But that’s who Storm is. If she sees someone in danger, she will go and help. She doesn’t care about politics, or territories. Her home is the sky and she will go where she can save lives. Her ‘acting out’ was a great indication of her personality and mutant power. No one can control her.

Judging by the first issue I think Storm will be going against human antagonists, and there will be a lot of human vs. mutant sentiment thrown in. The Anti-Mutant law talked about in the comics was a perfect example of real world laws that oppress people on the basis of their race, sexuality, religion, etc. The story is still building up and I’m curious to see the hurdles Storm will have to face. 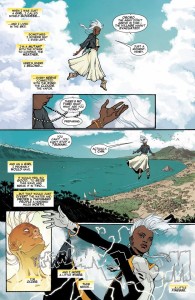 Even if you don’t enjoy the story as much as I did, which I doubt; fans will appreciate the powers shown in the issue. They brought her ‘cloth altering’ power back! I haven’t seen that in a very long time. Not only that, faced with a man pointing a gun at her face she opted to use her hand-to-hand combat skills rather than her mutant abilities, and it looked badass!

It’s wonderful that Marvel is showcasing an interesting group of women through their own solo series. The world needs more female of color that readers all over the world can relate to. With Storm #1 and the wonderful work Brian Woods is doing in the all-female X-Men series, Storm is well on her way to regaining her throne as a force to be reckoned with in the Marvel Universe, and she deserves it!

Strom #1 is a treat to read for fans of the Weather Goddess and a good starting point for people who want to see who Storm really is.

Have you read Storm #1 yet? What did you think of it? How awesome was it seeing her take out a tsunami? Let us know in the comments!

5 thoughts on “Marvel’s Storm #1 Brings the Weather Goddess Back into Action!”