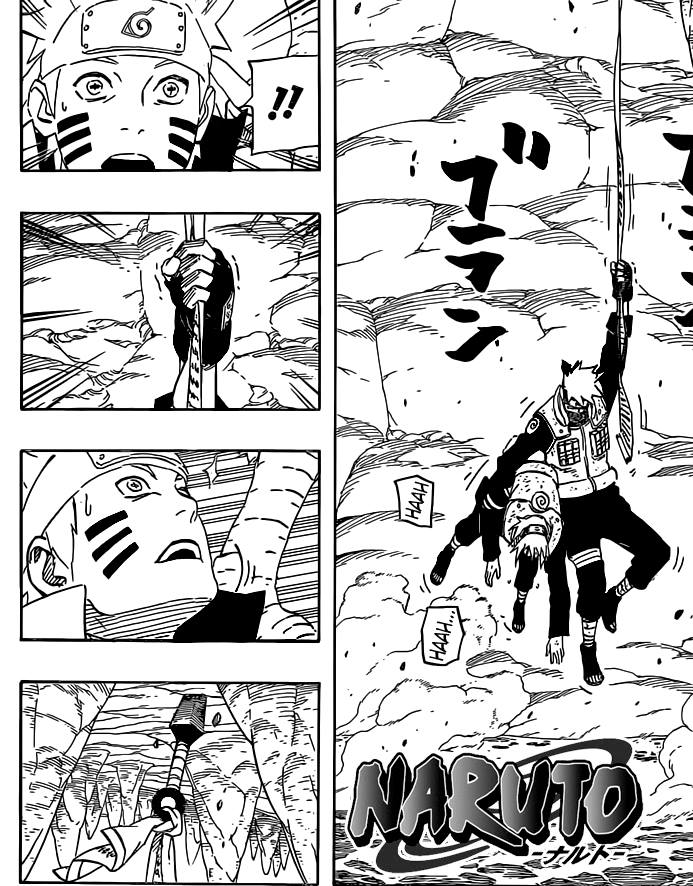 This week’s manga issue of Naruto picked up right after the previous week’s cliffhanger of Team 7 and Obito falling towards boiling lava. Once Again told a bit more about Sasuke and his motives, as well as including a nice flashback that showed Naruto’s growth as a character.

Some fans predicted that Kaguya teleported everyone into another dimension, while some said it was genjutsu. The issue revealed that she teleported them all inside an actual volcano. Anyway, the characters did what they could in order to save themselves. Sasuke summoned his hawk and only rescued Naruto, while the rest kept falling. I was expecting Sasuke to do such a thing. He had made it very clear in the previous issues that except for him and Naruto, everyone else was dead weight. I’m a Sakura/Sasuke shipper and I know that there are others out there, but I’ve realized that it’s not a ‘healthy’ relationship. As things are going, I would rather see Sakura get together with Lee, or at least stop thinking about Sasuke-kun for a very long time.

Kakashi managed to redeem himself this week. It wasn’t his Sharingan that made the character, it was his amazing brain. He threw a kunai at Obito. It went through his palm and attached him to the cave’s wall. He also managed to tie a scroll on another kunai (to use as a rope), and saved Sakura and himself from falling into the lava. Even though he can’t do anything against Kaguya it’s nice to see that he’s still an amazing character. Sasuke seemed to acknowledge Kakashi’s actions, but seemed angry about him saving Obito. Even I can’t figure out why Obito is still alive. Maybe Kishimoto wants Obito to give his remaining Sharingan to Kakashi before he’s dead?

Speaking of Kakashi, Sakura didn’t do anything while he held her – unless you consider her headband falling into the lava and confirming that they are in ‘real’ danger as doing something. I side with Sasuke this week. Sakura and Kakashi are useless right now. They should’ve been trapped under the ultimate genjutsu and allowed Naruto to fight Kaguya without having to worry about them. Sasuke again went on to say that only he and Naruto could seal Kaguya and they should stop worrying about others. I still don’t know what Kishimoto is trying to do with Sakura. He’s been building her up but she still hasn’t done anything. She heard Sasuke saying how worthless she was and got sad. Yes, Sakura, you are inches away from boiling lava, and your feelings for ‘Sasuke-kun’ are the only thing that should matter!

Naruto mentioned how Sasuke saved him back in Part I on the bridge even when he didn’t have to. I understand where Naruto was coming from, but the stakes are too high and I don’t think Naruto should let his guard down. Currently, having Kakashi and Sakura in the battlefield is a liability. While Sakura dealt with her feelings regarding Sasuke and Naruto, the scroll saving her and Kakashi started to burn because of the heat, and then it broke. This unleased a new power in Naruto. Yes, another one! He extended his chakra hands in order to save the two, and this enabled Kaguya to attack. Now that’s a villain! She was waiting for the perfect opportunity and found it. Even though Sasuke tried to defend against her attack (chakra needle-hair?) her Byakugan allowed Kaguya to hit the bird’s chakra points and everyone fell down. One of the hairs also hit Sasuke and I have a feeling it’s going to block his chakra or do something similar as the fight continues. With his elongated arms, Naruto was able to save everyone, even the bird. Who saves a bird that’s going to disappear any second? I guess Naruto is just a really good guy who tries to look out for everyone. Additionally, it was revealed that Naruto could fly because of the Sage of the Six paths chakra inside of him. Nice!

One of Naruto’s clones took Sakura and Kakashi to safety. (Seriously, why are those two even there? I need answers, Kishimoto!) The original Naruto hit Kaguya with a massive attack. The attack allowed Sasuke to come in from above and his Susanoo hit Kaguya with its sword. I don’t think it will do any damage, but it was good to know that both protagonists could fly. I don’t understand why Kaguya would want to make all chakra one again. Does she want to regrow the God Tree? And why does she want an army of white zetsus? I hope these questions are answered soon.

What did you think of this week’s Naruto issue? Excited that the Edo Tensi will be aiding in the war? Still waiting for Sakura to do something? Please share in the comments section below!

Previous:Will ‘Guardians of the Galaxy’ Pass the Bechdel Test?
Next: Bleach x 584 Review: The Headless Star 3